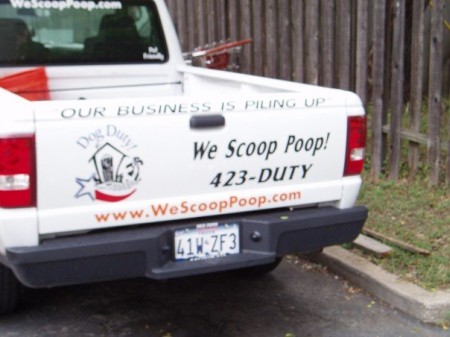 This is a shitty job.

A few years ago during Katrina when the gas prices were astronomical in America, Taco Bell came out with a contest where they were giving away free gasoline for the summer. I just love the concept of thousands of Taco Bells across the country decked out with words, "Taco Bell gives you gas!"

Cat food, UK: "I can't wake up without my furry alarm clock".

I can't figure out why it sounds smutty, but it does.

Not the best, not even great, but "pretty good".

Crafts Direct has a huge billboard on a highway I frequent, predominantly featuring an 80 year old woman putting her hands to her cheeks a la Home Alone, mouth agape, her expression that of shock, horror, and curiosity. Emblazoned boldly on the billboard are the words "Gosh, it's huge!".

There's some mattress store in PA with a song that consists largely of women singing "Ooh, ahh", which ends with a woman moaning ecstatically, "Ooooooh ahhhhhhh". I suppose it's meant to evoke relaxation at getting a good night's sleep, but that's not how it comes across. It definitely sends the message "Buy our mattress, it's great for sex!"

The worst part is hearing my own mother singing the song, as she inevitably does every time it comes on air.