My all time favorite slogan is still the bagel shop in Boise, Idaho attempting to play off of the Vagina Monologues being in town. 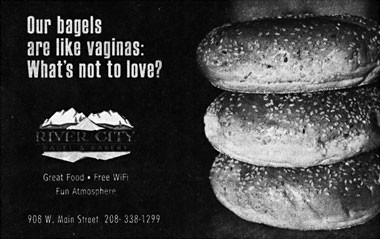 I live in the Rehoboth Beach/Lewes area in Delaware, which can be best described as a 'resort' for DC and PA. We have a pizza chain around here called Grotto Pizza, and on the highway into town on the southbound side, just before you get into the city, there's a huge sign that says "Grotto Pizza...you can almost taste it..."

Is that really something you want to be saying about your own food?

Though they are correct, it's pretty terrible pizza.

I know the Corn Nuts "Bust a Nut!" slogan was intentional, but damn.

For a soda called L&P (Lemon and Paeroa): "World famous in New Zealand"

It's the ride of your life.

Sorry, Winn Dixie. You are not getting better all the time. You haven't changed a goddamn thing, but if you want to start somewhere, change the floor cleaning product from Homeless Person Urine to something minty.

King of the Cows

Prince George's County, Maryland has taken pains to erect signs that declare it a "livable community."

That ranks right up there with beer makers who advertise their product as being "highly drinkable."