I was heading to work one day last year, I saw a large van that apparently sold Fences. While walking past the side I saw their slogan which kept me laughing for most of the day.

"R.J. Scaffolding - For a Better Erection" 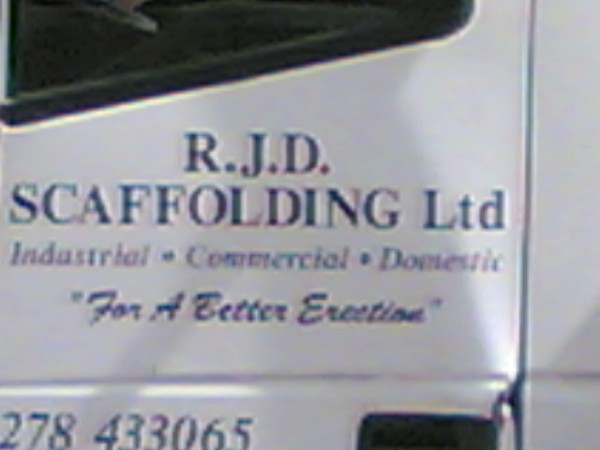 There's a local furniture store with the tagline: "You just can't do any better". Sounds like a pretty sorry state of affairs to me, kind of depressing.

Another furniture store maintains that they are "the solid wood people". Uh, alright.

Patriotic conservatives in my area used the slogan "Support our troops, support our country, support our president" as a political rallying cry back in 2004. I'm all for political expression, but I thought this particular slogan bore an unfortunate resemblance to "Ein volk, ein reich, ein fuhrer."

Visa's "it's everywhere you want to be" campaign always gave me the creeps. Abandon your dreams of discovery, child, because wherever you endeavor to go, Visa will be there first.

Rightway in my hometown. It's a little gas-station diner type thing. On their sign it says "EAT HERE GET GAS!" They want to franchise and wonder why no one wants to invest.

Around my house there is this grocery store that specializes in meats called Moo and Oink, and it had a billboard that had the phrase "You can't beat our meat!" in it's slogan.

While vacationing at some land my friend had in Wisconsin we visited a Dick's Grocery Store. Like most stores they have a special club card. What do they call their card? The "Dick's Insider" card of course! It was so funny my buddy signed up so he had his own "Dick's Insider" card....to represent his specialty with the ladies.

This lead to us laughing about other possibilities...such as Dixon Cider. Mmmmm, I sure do love some Dixon Cider.