Tales from the Zoo 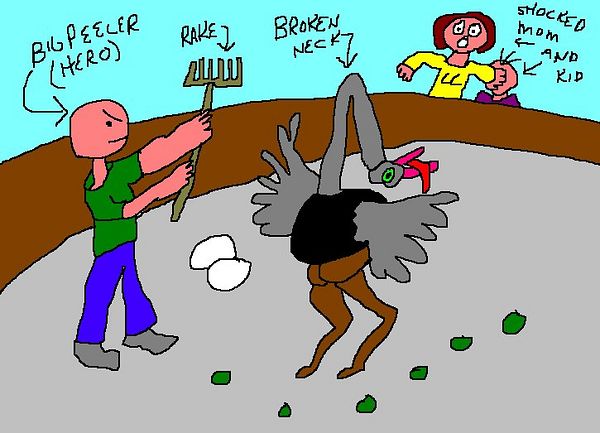 It snapped like a matchstick. Her head and and about 18 inches of her neck just flopped over to the right. BUT SHE STILL CAME AFTER ME!!! I'm like, "What the fuck!!" But she started running every which way but straight. She went left, she went right, she'd stop and run backwards, then forwards, then hop up the air. I guess it's like a chicken with it's head cut off, they just run till they die. And that's what she did. After her spastic dance she just ran forward and fell to the ground.

The public now was screaming in horror!! There were school kids there on field trips, parents with their children, etc. Everyone's screaming and covering their eyes and calling us names. I'm like, "Hey! We almost got killed here folks! Fuck those ostriches."

The bird sort of layed there and kept kicking. I have to admit that it was quite bizarre, but you've got to do what it takes to survive. We went into the barn and got our wits about us. We called our boss and told him what had happened. Before we knew it, every zoo official on the property was standing in our barn. We thought sure we were going to be fired.

A bunch of the public had gathered outside the barn and they were screaming for our heads. Then out of the blue, this guy steps forward and tells the Head Curator everything that happened. He completely got us off the hook. Props to whoever he was.

We went back out with a wheelbarrow and took the corpse up to the hospital. They did a thorough examination and deemed it disease free.

THE FOLLOWING STATEMENT IS TOTALLY TRUE. I SWEAR ON MY DEAD MOTHERS EYES!

The next week we ate it. We cooked it like a turkey and ate it. Since it died of "natural causes" (me), it was totally safe. We had huge ovens in the commissary since we prepared food for the whole zoo there. We had a huge zoo-b-que featuring the ostrich. Drumsticks as big as a watermelon. Totally fucking surreal. Oh, it tastes just like beef. Honestly. Very gamey.