EXPECTATIONS: For whatever reason, the media always tends to portray Oscar season as some kind of horse race. The field is crowded with contenders jockeying for position, certain actors are named as frontrunners, and some films come stumbling out of the gate. Eventually the whole analogy gets run into the ground, and by Oscar night all that's left is a herd of dead horses continuously beaten with trophies. Considering how gaunt Matthew McConaughey looks in the trailers, not to mention the subject matter, Dallas Buyers Club promises to be one of those films.

REALITY: "Serious Issue" films like this tend to fall into one of two categories: Vanity projects for the writers/directors to hash out their own personal politics, and films driven by a small handful of dedicated performers who want to turn someone's real-life problems into Oscar gold. Think Crash vs. Erin Brockovich. Of course, that dichotomy is less than perfect. It doesn't account for other prestige categories like historical power fantasies, films about singing, films by Pixar, and oddball also-rans. Dallas Buyers Club falls into the star-driven vehicle category. It features a pair of wonderfully honest performances that carry the rest of the film, but while McConaughey and Jared Leto do most of the heavy lifting, the film they carry turns out to be a bit of a non-starter.

The film tells the story of Ron Woodroof (McConaughey), an electrician, bull rider and Texas homophobe of the highest order. After an accident sends Ron to the hospital, Dr. Saks (Jennifer Garner) informs him that he has tested positive for HIV. Given thirty days to live, and with no hope of legal drug testing, Ron flees to Mexico. He discovers all sorts of medicines which prove effective, but aren't deemed safe by the Food and Drug Administration, and a scheme is born. He forms a begrudging partnership with Rayon (Jared Leto), a transvestite and fellow HIV patient, who helps him establish the film's namesake club. The club distributes medication to those who might otherwise never receive it, and allows Ron to overcome his bigotry before succumbing to the disease himself. 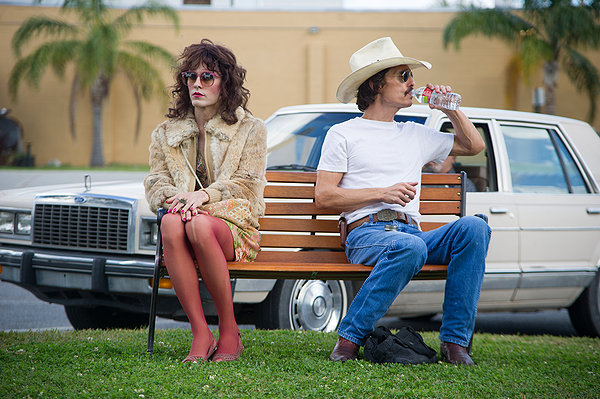 Did I hear someone say "Remake The Odd Couple?" No? Alright, then.

Right away, we see that Mac and Leto have fully committed to their roles. Both appear withered and frail, the result of what AIDS and a cocktail of drugs can do to the human body. Initially, I feared that this was the only card the film had to play. Looking the part and playing the part aren't necessarily the same thing. Fortunately, those fears disappear the moment the two characters meet. Ron is all hetero swagger, a frail twig of a cowboy who has no time for folks like Rayon, who is a little harder to define. He's able to cut through Ron's macho front, but the film spends so much of its time with Ron's scheme that Rayon's character becomes incidental.

It doesn't help that the film seems to have a laser focus on Ron and his scheme. As title cards count the days (eventually leading us months away from the thirty-day death sentence), we follow Ron on travel montages around the world. He searches for pharmaceutical companies to supply him with the drugs he needs to keep his business afloat and his body above ground. The script does a deft job of keeping things moving without getting bogged down in reminders of Ron's inevitable demise. This film moves so quickly that at times it even becomes difficult to keep up with the ticking clock. 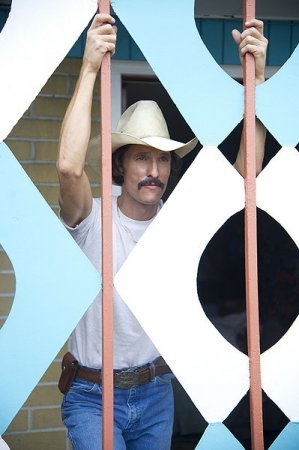 The facade is a cage. For it is a metaphor, you see.In 1985, the year the film takes place, having AIDS was essentially a death sentence. At the time, the systems and social norms in place meant that people like Ron were basically on their own. Drug testing hadn't yet found a sustainable treatment that didn't also poison the patient, and as a response, buyer's clubs like the one in this film began popping up everywhere. When it comes to depicting and defining its period, the film does a marvelous job of putting us right in the middle of Ron's situation.

Dallas Buyers Club is perhaps most effective, though, as a document of just how far we've come since then. Or at least, it would be if it bothered to illuminate the ways in which times have changed. Ron and Rayon's situation is bleak, certainly, with John Q. Texas spewing homophobic bile at every turn and FDA watchdogs confiscating their money and supplies on the regular. But surely circumstances are better in 2013. Aren't they? Assuming you're watching this film from a place of relative ignorance (like myself, in all fairness), who's to say? Things are certainly better on the social front, but the science still has a long way to go.

Ron's clash with the FDA brings the film dangerously close to becoming a Big Pharma scare piece. He and Dr. Saks push back against the moneymaking institutions that keep drugs from the people that need them, and it all begins when Ron decides to educate himself. Not long after his diagnosis, we see Ron in the library scouring science journals for anything that might save his life. While this illustrates that the best defense is a little education, Ron goes entirely overboard with it. In fact, it's downright charming to watch this rodeo buffoon go toe-to-toe with pharmaceutical executives and prove he's no dummy.

The film ends on a fairly definitive note, telling us that Ron managed to fight HIV for seven years before his death in 1992. Where does that leave us, though, in the grand scheme of things? Surely this story doesn't end in 1992. Dallas Buyers Club is a very small story about a desperate cowboy clinging to life like a bull, and Ron's struggles with the law constantly threaten to lead the film away from that story.

MINORITY REPORT: Only in Hollywood could a man earn a lifetime of medical knowledge in a training montage -- set, of course, to "The Final Countdown." Time to book passage to Hell. - Sean "Keanu Grieves" Hanson