EXPECTATIONS: When a new Vince Vaughn film comes out, there's a long and brutal ritual that occurs to determine which of us has to see it. (Which is where we've been for the past couple of weeks.) There are multiple stages to the Vaughn-a-Thon, including fire walking, a round-robin basketball tournament, a high-stakes game of Scattegories, and a part where a group of Vietnamese men in suits clamor and exchange money while forcing us to play Russian Roulette. Fortunately, halfway through the week, Sean was kind enough to mysteriously vanish, so it was really settled by coin toss. Fun fact: Joe apparently owns a two-headed coin.

REALITY: As you've probably guessed, there isn't much love for Mr. Vincent Von Vaughnstein around here, which I honestly feel like he brought upon himself with The Internship, The Watch, The Dilemma, and The Couples' Retreat. He seems determined to make himself the most bland and forgettable leading man in Hollywood, and that's a really weird goal to have. This means that reviewing Delivery Man, and essentially any Vince Vaughn film, poses a unique challenge to a critic: Reviewing the film on its own merits and qualities without being blinded by my hatred for the lead's stupid face. 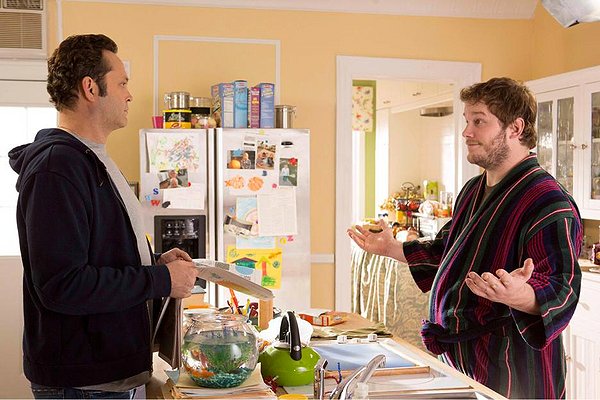 
Delivery Man stretches its premise razor-thin the instant it is introduced; telling the story of David Wozniak (Vaughn), an aimless forty-something with desperate money problems who discovers that due to a mix-up and his excessive sperm donorship in the early '90s, he is the biological father of over 500 millennials. A portion of his children begin a class-action lawsuit in order to challenge the legality of the sperm-donor anonymity clause, so David enlists the help of his lawyer best friend Brett (Chris Pratt), who is having difficulty enough raising his own four children. (Evidently alone? Kudos to this film for showing a semi-capable single dad.) Against Brett's instructions, David begins looking at the profiles of his biological children and hunting them down to meet them, while trying not to reveal himself as their father. Eventually, David has to choose between revealing himself to his new family and fixing the problems that directly affect his current, traditional, family. Oh, and also his girlfriend, Emma (Cobie Smulders), is pregnant, because there has to be a female character who is only tangentially related to the plot.

I'll try to keep the Vaughn-hating to a minimum here, but the movie makes a major misstep right from the beginning, because putting Vaughn next to the ultra-likable Pratt makes you realize immediately how this film could have been made a thousand times better with a simple casting change. As is, Pratt's scenes are the best parts of the film. Pratt can pull off "lovable slacker" in a way that makes the audience sympathize with him and want to root for him. It's basically his modus operandi, whereas Vaughn comes off as such a pathetic sad sack that it's difficult to care about his issues, or his supposed character growth, or anything, really.

The film exists in this weird spot where it is afraid to skirt into actual conflict, because it knows its supposed to be a "feel-good" movie, and as a result, we are treated to the story of a man with his 533 well-adjusted, intelligent, mild-mannered kids. All of them have decent jobs and life plans, they're all nice, happy kids, not a one of them seems to be angry at David for lying to them or stalking them. Apparently, out of 500 people, from different backgrounds and upbringings, miraculously not one of them turned out to have massive life issues, or even came out as a douchebag. There are made-up conflicts galore, and when we actually get to a realistic issue, wherein David must decide whether or not to intervene in a young heroin addict's life, that is addressed for about five minutes, then glossed over entirely. Essentially, Delivery Man is a film that believes the cure for addiction is "getting a job." 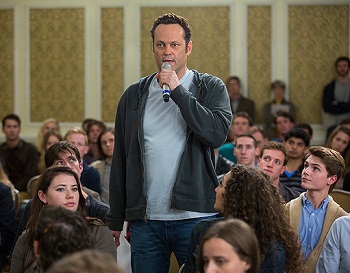 Father only knows best when I'm playing the father. Got it?Which brings me to my next point. I'm not sure how much of this I am bringing to the table because Vaughn is a noted Libertarian, but Delivery Man throws in some weird ideas basically out of nowhere. Other than David refusing to check his daughter into rehab because she has a good job and "people only quit when they want to," the film also ends with an oddly MRA-esque rant where he determines "only the father can declare whether or not he is the father," a dangerous assumption that a lifetime of daytime talk shows have taught me is patently untrue. Even better, he says this to Emma, in front of their newborn child, which comes off less endearing and more "threatening." This is the kind of thing people say before kidnapping their kids and flying to Japan, guys. That's not funny at all. Ordinarily, I'd be making this the highlight of the review, but this film is so dull overall that I really can't even bring myself to get angry about this.

What does bother me is that there is one major, obvious conflict that the film doesn't even try to address. Maybe, maybe, there is a point in which you should show your main character explaining to his pregnant girlfriend about his 533 kids, and that point should not be in the last five minutes of the movie. This is going to be a lot for a woman to process, but the film doesn't care about Emma's reaction, nor does it seem to care about Emma at all. You could have removed the character from the script entirely and lost nothing. Why? "Being a good person" and "helping people" was not enough of David's motivation; we had to shoehorn in a complete non-character whose only role is just "pregnant girlfriend?" It's frankly insulting.

Delivery Man is a remake of a 2011 Canadian film named Starbuck, which shares the same writer/director, Ken Scott. I have not seen Starbuck, but the idea that this dreadfully bland anti-story is the do-over does not fill me with much hope. Admittedly, I am probably being more negative about this film than is necessary, but that's what happens when the best a film has to offer is "mildly uninteresting." Delivery Man is a feel-good film without the feeling. Or the good. On the plus side, it did put the idea of a Chris Pratt-centered courtroom drama in my head, and I'm hoping it will have the same impact on someone else.

MINORITY REPORT: I like to pretend that every Vince Vaughn film exists in-continuity with one another. The Vaughn-verse, if you will. So when Kevin James kicked him in the nuts a few issues back, Vince became exponentially more virile, giving him super sex powers and turning him into Delivery Man. That's the only way I can make any sense of this. - Joseph "Jay Dub" Wade

So Owen Wilson helped him aim it at the cup? After The Internship, I'd buy that. - Sean "Keanu Grieves" Hanson