A weekend of pure quality -- and the appetizing prospect of a Dinner For Schmucks -- lures new contributor Martin R. "Vargo" Schneider to the team. First, though, talking-animal enthusiast Joseph "Jay Dub" Wade chimes in on Cats & Dogs: The Revenge of Kitty Galore.

I Just Can't Get Enough of Farting Dogs With Celebrity Voices

EXPECTATIONS: The chances that I'll actually enjoy Cats & Dogs: The Revenge of Kitty Galore are about on par with my chances of getting struck by lightning while winning the lottery during a shark attack. Nevertheless, here I am, ready to subject myself to yet another one of this year's movies about fluffy, cuddly animals doing things that are typically done by people. I was in high school the last time I even thought about the first Cats & Dogs movie, so here's hoping that I'll be in my early 30s the next time I think about the sequel. At any rate, it can't possibly be worse than Marmaduke or Furry Vengeance ... can it?

REALITY: Cats & Dogs 2 isn't worse than Marmaduke! Either last week's movie really did shove me head-first over the edge like ProfessorClumsy thinks it did, or my judgment is sound and I'm actually telling the truth. It's thoroughly mediocre and can really only appeal to people under the age of 10, but the movie is not terrible. This bears repeating: It's not a repulsive nightmare of a movie that will get regular airplay in the eighth circle of Hell. I feel like that in itself is cause for celebration. Someone start the parade ...

In all seriousness, though, it's a sequel to 2001's Cats and Dogs, a kids movie about secret agent dogs fighting super-terrorist cats. It's about as good a movie as you think it is. Silly, cliched and juvenile are all words that could be used to describe this movie, and everyone would agree. Now, what I'm not going to do is complain that this is a sequel to a movie that nobody remembers. There's a TRON sequel on the horizon, and I'm not about to be made a hypocrite by a movie about bald cat terrorists. What I am going to do is tell you that while Cats & Dogs 2 is by no means a classic piece of American filmmaking, neither is it a blight on the cinematic landscape. 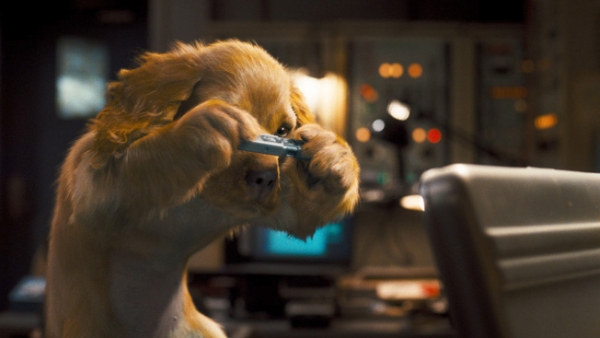 We now have photgraphic evidence that you saw this terrible film.

We meet our hero, a K9-unit German Shepherd named Diggs (James Marsden), after he's just accidentally murdered all the hostages at the scene of a robbery. He's taken off the force just in time to get recruited by the International Organization for Secret Agent Dogs or whatever the hell it's called. Diggs and Butch (Nick Nolte) go in search of a pigeon named Seamus (Katt Williams), who supposedly knows about the secret, diabolical plans of one Kitty Galore (Bette Midler, of all people), who plans to create a giant satellite dish and use it to destroy the dog world once and for all.

Now, does that sound even vaguely like something out of a James Bond movie? Well, it should, because it is literally the plot of GoldenEye. In fact, the whole movie is little more than one long James Bond parody. Now I don't know many kids who are well-versed in the 007 back catalog, but that didn't seem to stop these guys from making as many Bond references as they could in 82 minutes. Everything from the title to the opening credit sequence to a cat with metal teeth to a cat named Tab Lazenby (and voiced by Roger Moore, to boot): I have to hand it to them, these people are committed to their James Bond parody. It doesn't even seem to matter to them if it's any good, just so long as it's there.

In fact, now that I think about it, Cats & Dogs 2 is more like a parody of a parody. It has all the same setups and silly caricatures of the thing being parodied, but then as one extra joke, they decided to make it just plain not funny to spite us. You can tell that the writers and director watched the Austin Powers movies about 50 times, and came to one ultimate conclusion: "These movies need more butt jokes!" Luckily for them, kids think anything with a butt is fucking hysterical. Butt-sniffing, butts getting stuck in tubes, butts being bitten, stuff that comes out of butts, the list goes on and on. If something can happen to a butt, this movie will find a way to include it. (EDITOR'S NOTE: Pretty sure this statement is untrue, fortunately for the youth of today. -- GD)

As far as the cast is concerned, there are very few actual surprises. Most folks, like Roger Moore or Neil Patrick Harris, either dropped into the recording studio for the easy paycheck or because they just LOOOOOVED the first film (which seems unlikely). Chris O'Donnell actually showed up in person to play Diggs' cop buddy, but since the movie isn't called Cats & Dogs & Robin the Boy Wonder, he gets a couple minutes of screen time at the beginning and the end and that's about it. Then there's Katt Williams playing the idiot pigeon. He's in this movie a lot. A LOT. The only reason Williams got so much screen time was that once they sat him down behind a microphone, he simply refused to shut the fuck up. That was for the best, though, because most of the movie's good jokes come from him.

You read that correctly. I laughed at a Katt Williams joke in a movie about how cats and dogs hate each other. More than once, even. Look, if you're reading this, then there is absolutely no chance that you are the target audience for Cats & Dogs 2. The sight of a dog wearing glasses and a necktie and being voiced by Doogie Howser might seem adorable for a few seconds, but soon afterward there's a Nick Nolte dog flying a rocket-powered backpack, and then you get the inexplicable image of an Of Mice & Men-inspired pair of Irish assassin cats storming a whale-watching boat in order to kill a pigeon. Kids are gonna eat this crap up, but for mom and dad and sadsacks like me, it all adds up to one WTF moment after another.

If the youngsters are begging you to take them out to the movies, there really are worse things to wind up seeing this summer, though you're still better off convincing them to see Toy Story 3 for the eighth time. I hear it's way more depressing after eight viewings.

MINORITY REPORT: I'm looking forward to Jay Dub's upcoming anthology of 21st Century talking-animal films. It's going to be one hell of a read, if only to witness his slow descent into violent insanity as the book rolls on. Great stuff. -Ian "ProfessorClumsy" Maddison