It's All Your Fault, Tim Burton

In many ways, we have Tim Burton's Batman to thank/blame for pretty much everything in modern cinema: The trend of the "dark and brooding" superhero film; the marketing blitz geared to young and old alike; the encouragement of Tim Burton as an A-list filmmaker; The Dark Knight Rises. For better or worse, Batman is responsible for all of it.

After hemming and hawing over how to make a Batman movie for the better part of a decade, someone at Warner Bros. finally issued a declaration from on high: "Keep it simple, you pack of morons!" As a result, 'Batman fights The Joker' is as complicated as the plot ever gets; they cast actors who already looked like the hero and villain; and they let Tim Burton design everything himself (Batman Returns would do this as well, except suddenly the plot is completely wackadoo bonkers). But that ethos perfectly describes Batman: a complete and utter triumph of Tim Burton over substance. 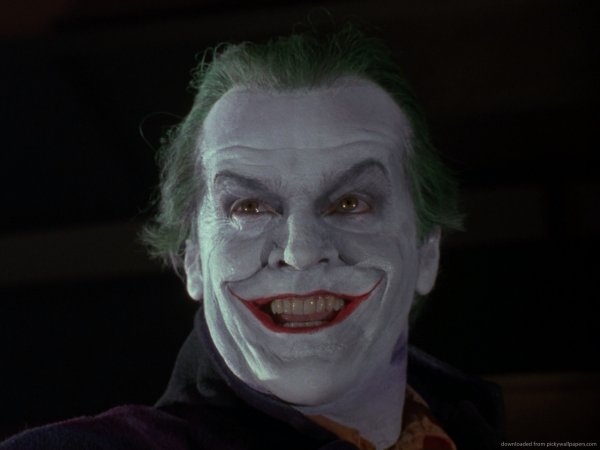 Hahaha! It's me, the funny joke man! I am a jokester of some sort.

Due to the fact that Jack Nicholson was, is, and forever will be a more famous actor than Michael Keaton, Batman is a film far more interested in The Joker than its titular hero. Jack Napier, a high-level mob thug, embezzles a quarter-million of Gotham City's party money, steals his boss' girlfriend, and then murders the fat X-Wing pilot from Star Wars. Only then does Batman accidentally drop him into a vat of green soup that turns him into The Joker, which causes him to completely lose his marbles and plot to murder half the city with 'Joker brand' laughing potion. Then Batman stops him by crashing the Batplane into a church.

Nicholson once referred to the film as "a transitional movie about the [comic book] genre." While I'm not entirely convinced he even knows what that means, he's absolutely correct. Up until then, the only Batman anybody really knew was the campy humor of the Adam West TV series. Batman was put into development specifically to break the public's image of a silly superhero fighting silly villains in silly costumes, which is ironic considering the increasingly silly characters this franchise would spit out over the course of the '90s. The resulting film is all about rebranding an image, from The Joker's Smile-X chemical that literally changes the way its victims look to the appearance of the new Batmobile, which looks like the bastard stepchild of a Corvette and an ICBM. There are dozens of enduring, iconic shots and images in Batman, but it has always seemed like a film more concerned with selling its audience a modern take on the character than really trying to build a unique story with him.

That, of course, would come later in the 1992 sequel Batman Returns. Having thoroughly conquered the world with his two-hour redesign of the Batman logo, Tim Burton set to work fleshing out his Gotham City by filling it with giant art deco statues of naked people, gothic curlicues and dozens of penguins equipped with rocket launchers. It's easily the strangest of the '90s-era Batman films, but it's also the most well-rounded and thematically complex of the lot, and the best it ever got for Mr. Burton. It really feels like he put all his kooky, creative energy into this one, leaving him to coast on faux-gothic fumes ever since. 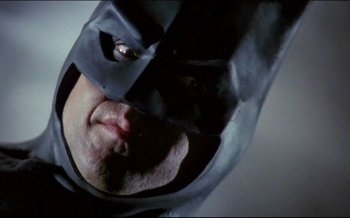 I know the mask doesn't quite fit right, but I'm still Batman.This time around, we're introduced to The Penguin (Danny DeVito), a squat, flipper-handed character who plots to take over Gotham with the help of his murderous clown gang and evil industrialist Max Schreck (Christopher Walken). Their plan is simple: Frame Batman for murder and use it as leverage to get The Penguin elected mayor. (So that he can...? What? Use city tax dollars to spruce up his underground penguin sewer? Bomb the city with penguin rockets and go blame-free?) Also thrown into the mix is Catwoman (Michelle Pfeiffer), once Schreck's mousy secretary, who returns from the dead to reclaim her femininity and seek revenge on Schreck for pushing her out a high-rise window.

Considering Batman Returns in conjunction with Henry Selick's The Nightmare Before Christmas (which Tim Burton wrote and produced), it's clear that in the early '90s, Burton was completely obsessed with the idea of a bunch of assholes ruining Christmas. While Nightmare used that idea as the whole crux of its story, Batman Returns uses the holiday season as a wintry backdrop to explore themes of family, death and rebirth, and misfits finding their place (The Penguin basically lives in the Sewer of Misfit Toys). In fact, as far as religious undertones go, this film deals in them in some pretty odd ways. Consider the two villains: The Penguin plans to attack Gotham by rounding up and killing all the firstborn sons, as per one of the ten plagues of Egypt. This Old Testament plan is very much in line with the first time we see him in the film, as an orphaned baby floating in a basket. Catwoman, on the other hand, is brought back to life through the mysterious magic of alley cats, not only becoming their patron saint, but also completely ruining any notion I just now had of trying to frame her as a New Testament kind of villain.

There's a special air about Batman Returns that sets it apart from the original Batman. The second time out, it feels as though the studio gave Tim Burton free reign to do what he wanted, which ultimately resulted in a Batman film every bit as dark and twisted as the first film seemed to think it was. Jack Nicholson gave a hell of a performance as The Joker, certainly, but no one ever asked him to spit cough syrup with every line or put live animals in his mouth the way Danny DeVito and Michelle Pfeiffer did. Batman Returns is every bit the grotesque carnival that a great Tim Burton film should be, and it makes use of its cast in some equally frightening and thoughtful ways.

It occurs to me that the superhero's role in any of these films is purely reactionary. As champions of the status quo, a superhero's job is to basically sit around until a villain shows up to give everyone a headache. That's what makes Batman kind of a boring character in these films; he's only as interesting as the villains he battles. When Batman fights a purse-snatcher, he slugs a guy in the face and takes him to the police; there's no story there. But when Batman fights The Penguin, we get a clash of ideologies, we get two characters from similar homes driven in vastly different directions purely by happenstance. The rogue's gallery has always been what makes any Batman story interesting, and here it is no exception. While Christopher Nolan's trilogy has done an excellent job of turning Bruce Wayne into a compelling character, the villains will always be the ones that keep bringing us back to the franchise, even if the films keeps turning them into goofier knockoffs of The Joker.