Now that Christopher Nolan is done with Batman, my suspicions are confirmed: The Dark Knight was a fluke. Lightning in a bottle. The winning ticket. A goddamn Christmas miracle. Sure, The Dark Knight Rises is good, but it's hardly a masterpiece, and Batman Begins is an overcooked origin story.

I don't hate Batman Begins, but I don't love it either. Then again, I hate origin stories and I'm pretty indifferent toward superhero epics. As a child, I never could get past my doubt that a cowl would mask my identity and a cape would enable me to soar. As an adult, I can't get past the dangerous messages couched in superhero films: The government, incapable of delivering true justice, does its damnedest to hold back anyone willing to rise above the bureaucracy and fight for the common coward. Needless to say, I never was much fun to be around. 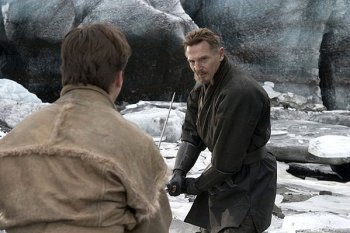 Without the rest of the A-Team, Ra's Al Ghul won't be able to stop batman kidnapping his daughter or some other inane shit.As for origin stories - well, the origin story is a prologue, and when stretched to fill an hour, it becomes rather tedious. After all, it's pretty formulaic: guy endures hardship, guy puts on a silly costume, guy beats up evildoers. In the past decade, we've seen more than a handful of these plots. Hell, just last month, we watched Uncle Ben get shot and Peter Parker go from sopping pussy to avenging angel to Greatly Responsible Superhero yet again. In this age of swift reboots, these origin stories are quickly growing tiresome, thanks to Hollywood's baffling refusal to continue a franchise with new actors - a remarkable reversal from the golden days of Tarzan, Allan Quatermain, Zorro, Superman, James Bond and Becky Conner.

I blame Batman Begins, made less than a decade after Joel Schumacher's abysmal Batman & Robin, for kickstarting this trend. The conventional justification goes something like this: "B-b-but Christopher Nolan was crafting a trilogy, charting a character's trajectory from damaged orphan to Christ figure."

OK, but that does little to explain why Batman Begins is so incongruous with the remaining two films. In its desire to bury Batman & Robin beneath the soil of canon, Warner Bros., Christopher Nolan and David S. Goyer crafted a supremely boring film that's not a piece of its whole. An hour into Batman Begins, we're still watching not-yet-Batman wrestle with an ultimatum put to him by a shape-shifting immortal being backed by a legion of ninjas who apparently aren't good enough to be heroes in the Justice L.E.A.G.U.E. of Hero-Villains or whatever. Yeah, the narrative hoops Nolan and Goyer require Bruce Wayne to jump through to develop depth are ridiculous and exhausting.

An hour later, Batman's wrestling Ra's al Ghul on a never-again-seen monorail to save a never-again-seen Katie Holmes. Nolan may have been growing his sea legs as an action director - bear in mind, he was hired on the strength of three atmospheric character-driven thrillers - but he and Goyer were way too eager to make Batman Begins look comic-booky, crafting a ridiculously overwrought, entirely unnecessary origin story in the process. While I appreciate comic books, film is an entirely separate medium; Batman Begins and the whole crop of Marvel movies fall victim to the misconception that what looks good and reads well in picture books plays well on the silver screen.

Thank God Nolan learned that lesson before making The Dark Knight, which largely eschews the primary colors and terse melodrama of comic books, while trading Katie Holmes for Maggie Gyllenhaal and David S. Goyer for Jonathan Nolan, in search of something deeper. Unlike Batman Begins, The Dark Knight features no supernatural elements, nothing outside of the Applied Sciences laboratories that qualifies as fantastic and no super-powered villains. The Dark Knight barely feels like a superhero movie at all; rather, it's a gritty crime epic that explores the gulf between Batman's no-kill rule and The Joker's everything-burns ethos through a series of escalating moral dilemmas.

Much has been made of Heath Ledger's turn as The Joker, besting all of the Jokers who came before in a performance that's equal parts amusing and terrifying. A self-described "agent of chaos," his complete lack of a fixed origin story (do you see where I'm going with this?) renders him far more interesting than Batman. Christian Bale, with his ridiculous growl, plays last fiddle in The Dark Knight, with Heath Ledger, Aaron Eckhart as Harvey Dent and Gary Oldman as Lieutenant Gordon sharing most of the screen time and stealing their scenes in the process.

Fresh from directing The Prestige, Nolan uses the tenets of magic and theatrical trickery to define The Dark Knight. From the opening bank heist to the infamous pencil trick to the very end, Nolan is obsessed with deceiving his audience, and the results are electric: warts and all, The Dark Knight is the finest blockbuster of the 21st century.

If The Dark Knight Rises isn't quite as good as The Dark Knight ... well, so what? No sequel could possibly live up to such an unqualified masterpiece, and Tom Hardy deserves a good-sport award. While he essays the best possible version of Bane, it's unfair to any actor to ask him to walk in Ledger's shadow. The Dark Knight Rises lacks the commitment to visual and narrative reversals of expectation, and it retreads some of the worst aspects of Batman Begins, but it also incorporates the strengths of Inception: Wow 'em in the final act, and maybe they won't care about the flaws in the first.

Well, I care - The Dark Knight Rises (or, as my friend Jake likes to call it, The Passion of Batman) spends too much time on boardroom melodrama, retcons, ideas of justice played out through exhausting levels of allegory that redefine "stretching it," etc. - but I'll be damned if that last act isn't a terrific spectacle, convoluted though it may be.

Nolan's take on Batman is among the most inconsistent trilogies of all time and it's rather unique, in that very few trilogies improve upon such a mediocre first entry. But I'm pleased Nolan stuck with Batman: The Dark Knight and, for the most part, The Dark Knight Rises make superheroes compelling for even a curmudgeon like me.