What to Expect When You're Expecting

EXPECTATIONS: Think Like a Man put me on the self-help-book-adaptation beat, I suppose, which is still better than talking animal movies. I must balance the amusing trailer with lessons learned from Think Like a Man and approach this movie with caution: I have no idea what to expect from What to Expect When You're Expecting. (Bet you didn't see that one coming!)

REALITY: Once every two weeks or so, Hollywood delivers an establishment film that exists solely to pipe propaganda from the hegemony directly into our fucking brains. What to Expect When You're Expecting is one of those films. There, I said it. If you want to take the "but an aggressively normative comedy-drama can still be FUNNY" stance (see: The Blind Side, The Help, Think Like a Man), we will agree to disagree and part ways here.

What to Expect When You're Expecting differentiates itself, only slightly, from Think Like a Man by loosening the connections between characters just enough, until it seems like Short Cuts for retards. Some of the characters will see other characters on TV, other characters will turn out to be distant cousins, and so on. Otherwise, it's structured exactly the same: Through the magic of shoddy screenwriting, five couples will illustrate a different chapter of a self-help book. Four weeks ago, it was thrice-married Steve Harvey's guide to playing mind games with predatory men in the grand pursuit of gettin' hitched. This time, the source material - a pregnancy guide first published in 1984, now in its fourth edition - is a little more solid.

Films like these defy plot summaries, so here's a handy diagram: 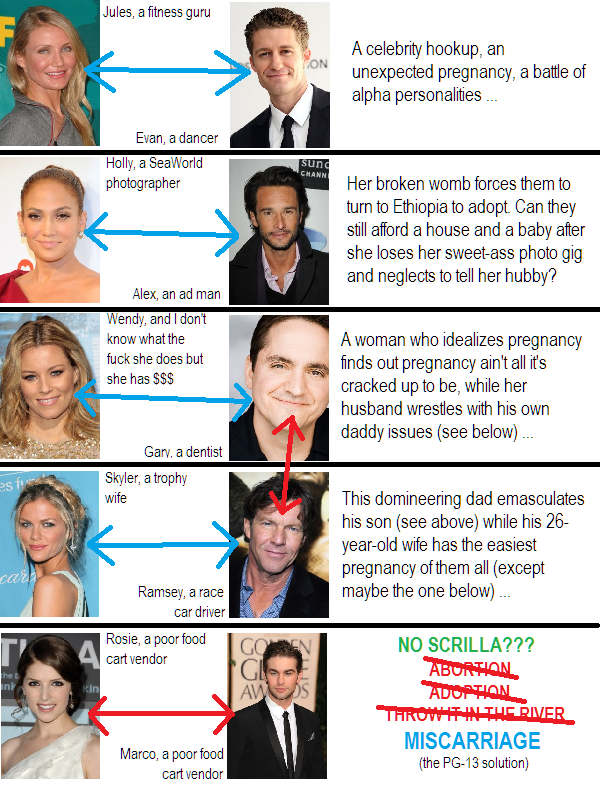 Hopefully, those job descriptions make the economic caste of each character pretty damn clear: Aside from Rosie and Marco, the principal characters range from upper-middle-class to incredibly wealthy. Wendy is either trying to become a children's book writer or a pregnancy specialist (it's never clear which), an ambiguous endeavor subsidized by Gary's patients, one of whom is apparently Lil Wayne.

What to Expect When You're Expecting presents human gestation as stressful for couples absent financial woes, but the screenwriters reveal their sheer laziness when the only couple that's not financially ready for a child gets a second-term blessing in the form of a miscarriage (because no PG-13 Hollywood film would seriously touch abortive solutions with Cameron Diaz's dick if Matthew Morrison were pushing). Unfortunately, the whole scenario is so incredibly implausible, the plot would ring false even if they did carry that fucker to term: Marco and Rosie are acquaintances, Marco and Rosie have sex one time, Rosie gets pregnant, Marco entertains the notion of marrying Rosie - no, wait, this is EXACTLY what happened to 20 percent of my high school class. The screenwriters abort (heh heh) an entirely plausible narrative thread because they're afraid this adaptation of a self-help book about a pretty serious topic might stray too far from the light and fluffy film they envisioned in which the rich and famous have to look mildly uncomfortable as they deal with a completely natural biological process.

The hegemonic skull-fucking doesn't stop there.

Every birthing mother in What to Expect When You're Expecting rejects an epidural, incorrectly believing it would "poison" their babies - save for one unlucky mother, for whom the epidural acts as a gateway drug. She rejects the epidural, experiences incredible pain, begs for an epidural and gets the epidural after her husband bribes the anesthesiologist with a wad of his father's cash (money can't buy you happiness, but it can buy you an injection that makes you feel nothing at all). Of course, the film implies, also incorrectly, the epidural adversely affects a baby's heart rate, and she becomes the only character to undergo a C-section, which proves life-threatening. Even if you're financially secure, hormonal insanity leads to weakness, which leads to epidurals, which lead to C-sections, which carry you to the brink of life or death; this is the kind of message What to Expect When You're Expecting serves up on a silver platter every 10 to 15 minutes.

But is it funny? 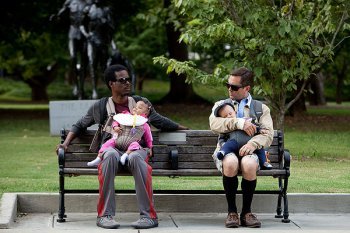 Hey Chris, how about those Madagascar movies?No, not really. The running joke about a gangstalicious group of new dads headed by Chris Rock, which made the trailer somewhat appetizing, falls flat in its full incarnation. The gross negligence on display in these brief and scattered scenes feels entirely out of place, which leaves Wendy, Gary and one or two bit players to pick up the slack. Tellingly, Wendy and Gary are also the only characters to generate real pathos, proving that Elizabeth Banks and Ben Falcone are maybe the only actors here who know what the fuck they're doing with the material. Even Anna Kendrick, who shone in 50/50, is left by the wayside as she struggles against the limitations of her narrative arc.

Successful ensemble comedy-drama requires a sure touch the filmmakers lack. If we're to identify with multiple protagonists, as we're asked to do here, they must be unique, vibrant and likable. But this suffocating absence of laughs and emotion - this pervasive dullness and inhumanity - is what, so help me God, keeps What to Expect When You're Expecting of rising to the level of even Think Like a Man.

(Side note: What to Expect When You're Expecting instilled in me an incurable desire to watch Inside, which is a way better film about parenting ... and way less horrific. I'd rather watch French ultraviolence than spend another minute scrutinizing Diaz's surgically altered face, which is getting more grotesque with each successive movie.)

MINORITY REPORT: My only frame of reference here is the time I saw He's Just Not That Into You on a plane trip to Los Angeles. Even on a three-inch screen, I could tell that the self-help/rom-com gulf is too wide a genre gap to cross in two hours. These things are sitcoms begging to be made, and yet they keep making them into films that only 30 people will ever see. It's baffling. - Joseph "Jay Dub" Wade