EXPECTATIONS: I can't say I'm expecting much from a film whose sole selling point is exploiting Chloë Grace Moretz more than her last five films combined. The only reason it's on my radar in the first place is because of the stink everyone I know made last year when they shot the movie not far from my house. Of course, my state doesn't have the most sterling track record when it comes to movies, so I'm going into this Hick thing pretty apprehensive...

REALITY: There's poor taste, there's bad taste, and then there's crap like Hick. What might have been an interesting movie about the sorts of people who make it easy to make fun of backwoods living (a long shot, I know) instead falls victim to a number of pitfalls that all but render it unwatchable. Too many scenes ramble for far too long only to achieve absolutely nothing, and the film's main character probably seemed like a much better idea on paper than she actually is on-screen. Between the constant drug use, perpetual leering at a 13-year-old girl and multiple rape attempts, Hick seems like a film with nothing more to say than "Gee, rural America sure is a toilet, isn't it?"

As Hick opens, we meet Luli (Chloë Grace Moretz), the 13-year-old poster girl for Trashy Farmgirl Weekly. Both her parents run out on her for no discernible reason, and after drawing a cartoonishly loopy route on a roadmap of America, Luli sets out to find fame and fortune under the bright lights of Las Vegas. Along the way she meets a limping cowboy named Eddie (Eddie Redmayne), a 20-something criminal burnout (Blake Lively) and Alec Baldwin, all of whom have more disturbing connections with one another than one might expect.

The hardest part of this film to figure out is the tone it's trying to strike. When it's not thoroughly creeping out its audience with rape-crazy rednecks, it's telling cutesy stories about Luli's stillborn baby brother, complete with crayon drawings of the fantasy world inside Luli's head. Is this cutesy, though? No; it, too, is fucking creepy. The moments in which we see the world through Luli's art are not only poorly conceived bits of melodrama, but also they're utterly pointless to the story at hand. Why is it telling us about the dead baby brother we'll never get to meet right after a rape attempt that ends in murder? I'm convinced it's because the film wants to periodically remind us that Luli is a child, just in case we ever got it into our head that she isn't, in fact, jailbait. Hick is built upon passages that exist only to make viewers hate themselves for watching. Imagine if instead of over-the-top torture porn, Saw VIII turned out to be a melodrama about cowboys raping teenagers. That's how off-putting this is. 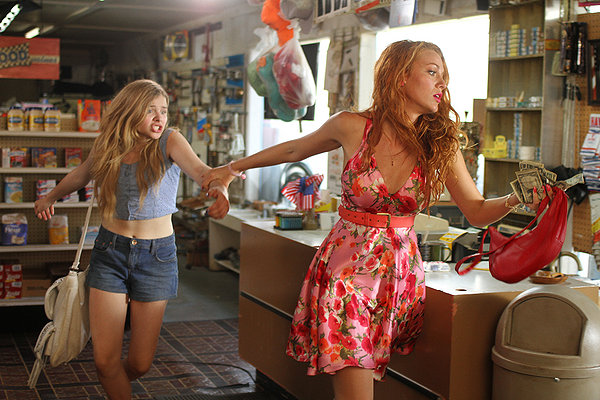 Come on, we've gotta get you ready for a career in radio where you can never be leered at again...


If the point of this film is to exploit a precocious young girl by forcing her into dangerous, adult situations, it fails by a country mile. Luli is stuck in this place from day one, and she learns nothing except how to game the situation to her advantage. Her only chance to escape the lifestyle she's found herself in comes in the form of a chance meeting with Alec Baldwin's character (which goes down the way I imagine most Baldwin encounters do). Hick isn't even the best Chloë Moretz film about forcing a kid into a dangerous place. For all its slapsticky nonsense, Kick-Ass mines many of the same themes to much more engaging effect. It also doesn't make my skin crawl the way Hick does, which actually makes me like Kick-Ass even more in retrospect.

For how seemingly unaware Hick is of its terribly uncomfortable central conceit, it's a film that acknowledges pop culture in some strange ways. Set sometime in the mid-'80s, it lets Luli rattle off lines of dialogue from Sunset Boulevard all the way to Star Wars. She's a girl who has watched too much TV in her days at the farmhouse, and that's clearly where she learned to put up a tough veneer. Quoting Dirty Harry while pointing a gun in the mirror like Travis Bickle is not only Luli's first display of toughness, but also it's a weird visual malapropism that I hope was intentional. One could argue that Luli doesn't really understand the tough guys in the movies she watches, but the movie sails right over this as if to say "Oh, you know how kids are..."

Elswehere in the film, the Eddie character plays out like a bargain basement version of Ryan Gosling's character in Drive. Whereas the Driver was stoic to the point of seeming abnormal, Eddie is certainly abnormal, but his drive to protect/deflower Luli is so powerful as to appear cartoonish. Every moment he's onscreen, Eddie seems utterly amused at the girl's antics, until some undefinable switch gets flipped in his brain, and suddenly he's on the hunt.


Late in the film, it's suggested that Eddie's entire motive is to kidnap young girls and sell them to the wealthy buffoon with the most money. It's there, I didn't imagine it out of boredom. Why isn't this threat hinted at more in the first or second acts? Why doesn't Eddie show any hints of his brand of crazy sooner? I guess this is just one of those cinematic mysteries that will never be answered. Hick is surely doomed to the On Demand graveyard, where I'm willing to bet five people will ever see it, and then promptly discover that their names have just been registered on several government watch lists.

Speaking of 'doomed', Luli seems doomed to be trapped in this hick lifestyle forever. In a moment of on-the-nose clarity, her mother even says this straight to her face. Of course, there's no indication that she ever really plans to leave it. Vegas sleaze, Nebraska sleaze, it's all the same really. After 30 minutes or so, a sense of hopelessness invades the film, as we realize that we're just like Luli. We may not be in danger of getting molested by limping cowboys, but we're trapped in this vicious cycle of exploiting young people for our amusement. If there is anything positive to say about Hick, it's that for every one of these films that winds up getting dumped onto cable and forgotten forever, perhaps there are ten productions that see that failure and think twice about putting young teens through hell.

MINORITY REPORT: Your honor, I'd like to move that my client, Mr. Wade, be removed from the Chloë Moretz Stalker Watch List, submitting this review as evidence that he did not, in fact, willingly choose to watch the movie Hick, and that he certainly didn't enjoy it. - Something Awful Attorney-at-Law, Leonard J. Crabs