EXPECTATIONS: Gary Oldman has to find a mole at the head of British intelligence. Even that simple summary has stirred your excitement, admit it. The trailer has everybody falling over themselves in anticipation, even though (or maybe because) it doesn't give a lot away. Personally, this will be my first encounter with the story, having neither read the book nor seen the Alec Guinness-starring mini-series, so I'm pretty excited to see if all the fuss is justified.

REALITY: Tinker Tailor Soldier Spy is an incredibly gripping thriller that never patronises its audience. While it may be described as deliberately paced, it is in fact a perpetual bombardment of intriguing developments to make you raise your eyebrows, stroke your chin and generally get involved. It is, at its heart, a whodunnit that wants its audience to play along. 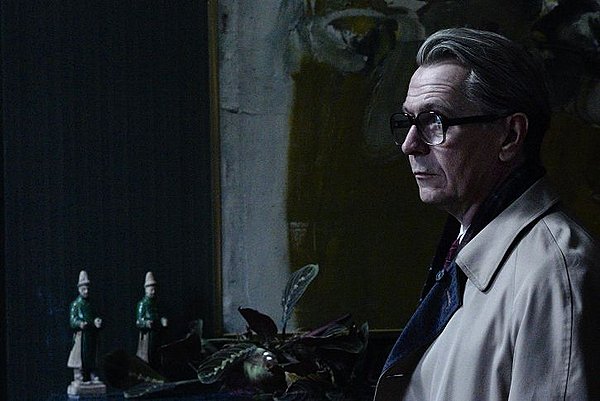 Those are some tacky ornaments, Gary.

The intrigue begins when George Smiley (Gary Oldman) takes a forced retirement from his high-ranking position in the Circus (the codename for British Intelligence). Minister Oliver Lacon (Simon McBurney) approaches him with a proposition: Lacon has received word from returning spy Ricky Tarr (Tom Hardy) that there is a mole in a top position within the Circus, and Smiley is charged with the task of rooting him out. After teaming up with inside man Peter Guillam (Benedict Cumberbatch), George's first step is to uncover the truth behind the grim disappearance of field agent Jim Prideaux (Mark Strong). 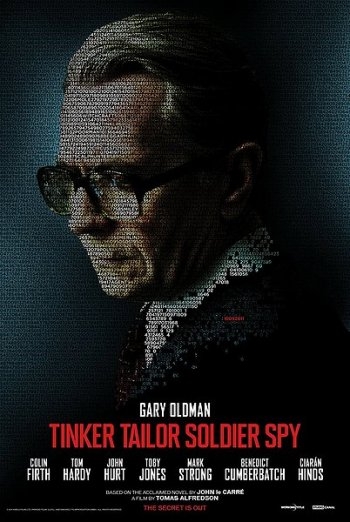 How's that for a classy poster?At the top of all of this is a theory developed by the late Control (John Hurt) that the mole is one of five suspects, defined by jovial codenames: Tinker, Sir Percy Alleline (Toby Jones); Tailor, Bill Haydon (Colin Firth); Soldier, Roy Bland (Ciarán Hinds); Poor Man, Toby Esterhase (David Dencik) and Spy, Smiley himself. This is where you come in. I don't mean in the Clue sense where it literally asks you to solve the mystery, but it is very clear that they want you to try and figure it out along with the protagonists.

The film gives you all the evidence you need, along with a lot of character development so that when the final reveal is made, you care about it a lot more than you might have. Smiley is an incredibly sympathetic lead, played with aplomb by Oldman, but it is Peter Guillam onto whom the focus of the film shifts. The audience is placed in his position, as the character least emotionally invested in the investigation from the start. It is through him that we learn of Smiley's past and of developments in the case, and it is through him that the truth is revealed.

This is a good, old-fashioned whodunnit in the traditional sense, which is not something that we've seen in cinemas for a very long time. I hope this heralds a resurgence in the genre. Audience participation is something of a lost art, at least in a cinematic form, and it is very refreshing to see a film that promotes participation without pandering to I Don't Know How She Does It fans. While that film assumes you can't follow a basic plot for more than five minutes, Tinker Tailor Soldier Spy rarely repeats itself or assumes that its viewers aren't paying attention. As Smiley says to Guillam, "You're on your own."

The only real gripe I have about this film is that once the truth is revealed, it feels like there's more to do that doesn't get done. I know we're all waiting to find out who dun it, but I would have liked a little more of a chance toward the end to reconcile with the suspects who didn't dun it. I also wonder just how effective the whole thing would be if one were to enter into it already fully aware of who the mole is, but the jury is still out on that, as I will most certainly be watching it again anyway.

MINORITY REPORT: Cold War thrillers are pretty scarce these days, what with the Cold War being over and all. And since the next James Bond movie is years away, I can't imagine any better substitute. - Joseph "Jay Dub" Wade