I Don't Know How She Does It

EXPECTATIONS: Oh, look. It's a romantic comedy. A romantic comedy with Sarah Jessica Parker as a working mom. Actually, that could work. In contrast to Sex and the City, we might finally see something that isn't condescending to its audience. A celebration of the working mother encapsulated in a cliche-ridden waste of time. Excellent. 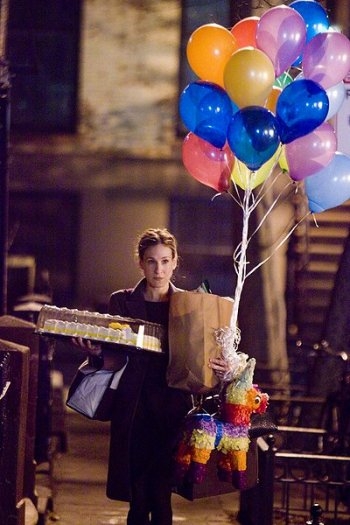 I'd offer you a hand, but I don't want to seem sexist.REALITY: Looks like I spoke too soon. "Condescending to its audience" was exactly the right phrase to use, just not in that context. It baffles and saddens me that what we have here is a film that intends to empower women and then proceeds to treat them like idiots.

Hot-shot banker Kate Reddy (Sarah Jessica Parker) is so busy juggling her career with her family, along with her husband Richard (Greg Kinnear), that she never stops. People often state that they just don't know how she does it, and the answer is invariably "by the skin of her teeth." To her delight, she manages to impress some of the higher-ups at her company with some pension fund that the writers are kind enough not to bore us with the details of. Unfortunately, this means a lot of traveling and cavorting with the roguishly handsome and provocatively named Jack Abelhammer (Pierce Brosnan), which doesn't exactly help her home life.

I Don't Know How She Does It is not without its charm. Sure, you won't be on the edge of your seat in anticipation of what might happen next, and you certainly won't be rolling in the aisles in hysterics, but you probably won't want to drill holes in your eyes either. There are a couple of giggles to be had, and the lead characters are likeable enough to get by, with a decent cast that works well together. What makes this a terrible film is that it is very carefully constructed to appeal only to the stupidest of stupid people.

This is why I describe I Don't Know How She Does It as condescending. In the Sarah Jessica Parker tradition, every scene is overlaid with incessant voice-over that, when it's not stating the obvious, loves to repeat itself. That's not all, though. Often, scenes will freeze-frame and become littered with on-screen annotations to keep things as easy-to-follow as possible. Look, nothing has happened in this film yet. I can pick up the names and relationships of three characters without you explaining them in depth. Yes, I can guess that this woman is your friend, I know how people behave when they are friends. People understand human interactions and can pick things up from context clues, so stop treating them like particularly slow-witted lemmings.

Take this early offending example: Kate and her friend Allison (Christina Hendricks) arrive at a bake sale. Kate's voice-over drones on and on about how they are friends and that Allison is her friend and that they are friends. Then an annotation appears, pointing out Allison's bowl of un-set Jell-o. The annotation reads "Un-set Jell-o!" "That," Kate explains to us, as carefully as possible, "is a bowl of un-set Jell-o!" I am completely lost here. What's in the bowl? Are you two friends or what? 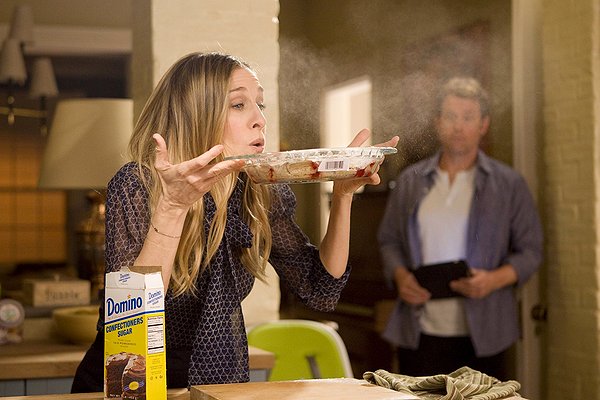 i don't think the secret cocaine habit is helping you here.

But then it gets even worse! Kate takes great pains to introduce us to two characters that she refers to as The Momsters; two working mothers who seem unflappable. Basically, they are people who don't get on with Kate and Allison. We need to know who these characters are because... actually, no. These characters have absolutely nothing to do with anything else that happens in the film. You could have finished this scene four days ago, without any of this time-wasting. Thankfully, this gets less frequent as the film wears on and all the pointless side characters are introduced, but it's a pain getting there.

But then it gets even worse!! Almost every scene, voice-over and all, is followed by bizarre, fourth-wall-breaking interviews with the characters. What is this? Reality TV? Are you making some statement on the self-centred nature of your audience who presumably think the whole world revolves around them and that everybody talks about them when they're not there? Even mundane things like packing for a trip or going for a drink are followed by an interview. It's just more time-wasting filler to keep the dumb-dumbs entertained. It's one step short of flashing "YOU ARE WATCHING I DON'T KNOW HOW SHE DOES IT! STAY TUNED FOR MORE!" across the screen every two minutes.

If you can rise above being treated like an imbecile, then you'll probably find I Don't Know How She Does It to be just about okay enough to not hate. There's certainly enough going for it to warrant staying 'til the end. If, however, if you really want to see a romantic comedy, why not see if Friends with Benefits is still playing? Or rent Morning Glory? If you chose to watch this over those better options, well I just don't know why you'd do that. Yeah, that was a reach.

MINORITY REPORT: Whatever it is, I'm pretty sure women have been doing it for millennia. That said... I am also confused as to how Sarah Jessica Parker manages to do it. - Joseph "Jay Dub" Wade