EXPECTATIONS: If you haven't been following Kevin Smith lately, he's been busy hyping up his 'return' to independent filmmaking for the better part of a year. Since premiering Red State at Sundance and announcing to a roomful of potential distributors that he was selling the film to himself, he's been touring it around the country charging $70 per ticket. That buys you permission to see the movie, and then the chance to watch Smith get up on stage and yammer on about nothing for five hours. Most people (Smith included) will tell you this is an elaborate ruse to keep film critics from seeing and hating on it for free. (I took the less insane route and rented through Video On Demand.) But I'm not here to criticize the man, I'm here to criticize the film. I'm sure I'll get to Smith himself soon enough.

REALITY: You know what? Let's just cut right to the chase.

As the film opens, we meet three teenagers (Michael Angarano, Kyle Gallner, Nicholas Braun) who are lured out to a ranch in the middle of nowhere with the promise of sex and booze. Almost immediately, the three are knocked out and taken hostage by the Five Points Church, led by Reverend Abin Cooper (Michael Parks) and his wife (Melissa Leo). The Church plans to execute the boys for their sins, but wind up tipping off the local sheriff (Stephen Root), who then calls in the ATF to take the church out. The ATF, led by John Goodman and Kevin Pollak of all people, lays siege to the Cooper compound and winds up getting far too many innocent people killed. 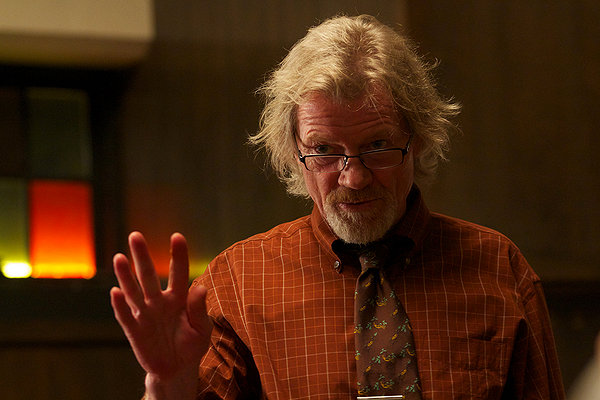 Here's everything that is good about this film. You're welcome.

If there's one thing that can be said for Red State, it's that Smith is certainly not afraid to take chances. Sympathetic characters are dispatched quite readily (and sometimes completely at random); the villain's introduction is a lengthy sermon that culminates in a gruesome murder; and the ending teases a ballsy twist that Smith quickly reneges on after the fact. Brief moments of Red State feel every bit as fresh and engaging as the better moments in his early films, but for the most part this movie is just a scatterbrained mess.

Now, if the reason for all this madness is that it's all the things Smith wanted to put into a movie but was never allowed, then I say he didn't go far enough. When Melissa Leo starts kicking the corpse of one of the dead teenagers (Spoiler Alert: People die in this horror movie) and screaming that she hopes they burn in Hell, I actually thought for a moment Smith would have the insane cojones to cut to the teenager looking down from heaven with a disapproving look on his face. The movie goes to such comical extremes to be violent and edgy that I'm kind of surprised it didn't also go the other route and throw in a bunch of humorous non-sequitur gags just for shits and giggles. It would've definitely made the ending more palatable than the Burn After Reading-esque denouement we wound up with. 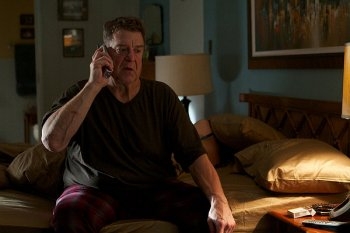 John, you're better than this.One of the film's central problems is that it lacks any kind of narrative fluidity that would allow for a religious slasher film to lead into an action-packed siege picture. These two pieces feel wholly incongruous, and the only reason they work together at all is because of Smith's half-hearted attempt at drawing a parallel to the 1993 Waco Massacre. It definitely feels like Smith started writing his version of a slasher film, and then stumbled across a narrative tangent that seemed more interesting than what he was already doing. Imagine if Friday the 13th switched gears thirty minutes in and started incorporating elements of, say, The Untouchables. That's the level of dissonance Smith is playing with here.

My question, and I'm sure the question on the minds of most viewers, is why bother telling this story now (or even at all)? The Waco Massacre happened almost twenty years ago, and the Westboro Baptist Church is a media footnote at best these days. If there was some kind of message that was supposed to make Red State relevant to Obama's America, I failed to pick up on it. If it's a history lesson Smith is trying to impart, I can't imagine anyone would be willing to slog through it beyond the Smith faithful and batshit crazy conspiracy theorists. Nobody remembers David Koresh, and the ones that do probably spend way too much time on Wikipedia already.

All that said, Michael Parks' performance absolutely deserves mention. His Reverend Cooper is at times both quietly disturbing and utterly charming. Whenever he's on screen, the film slows down considerably to give his character room to breathe. In fact, it's practically the only performance with any kind of subtlety to it, the lion's share of the cast instead deciding that a horror film calls for hysterical screaming and incoherent rambling. Cooper definitely belongs in a better film, one that isn't dead-set on making him out to be pure evil and forcing him to stand around with a bunch of wailing banshees.

If I'm going to be a fair film critic, I have to say that Red State is definitely unlike anything Kevin Smith has ever made. Except the action scenes are even more unintelligible than the ones in Cop Out, the religious overtones are just as hamfisted as they were in Dogma, and it's every bit as ramshackle a production as Clerks was. ...Okay, so it's unlike anything Smith's done before, except for the fact that it's everything he's ever done all rolled into one pot-fueled fever-dream gun show.

MINORITY REPORT: Kevin Smith is trying so hard to keep himself relevant in the wake of the reviews to Cop Out. You know what real filmmakers do when they get bad reviews? They cry like babies and prevent critics from watching their films because they have enough sycophants to see them anyway... oh no wait. That's just you. - Ian "Professor Clumsy" Maddison