EXPECTATIONS: Let's really think about the phrase "Oscar Bait" for a minute. Imagine you were a fish. A fish named Oscar. Or you can use your own name, whatever. Fish's name doesn't matter. Point is, you're a fish. Now, let's say you're swimming around, doing your thing, when right in front of you floats the worst fisherman's lure you've ever seen. These worms don't live around here, these worms aren't normally florescent pink, and you can see the hook, line, and the fisherman standing above you. This is bait. Do you still take a bite?

Yes. Yes, you do, because you're a freaking fish. And that's what I feel like buying my ticket for Conviction: The dumbest fish in the whole damn lake.

REALITY: Conviction is a film that revolves around the idea that if someone is determined enough that they're doing right, they can do anything. Also, Conviction is a film that revolves around an idea that is inherently flawed. Have you ever seen someone at a department store yelling at a clerk because she was sure the store was holding her item in the back room? Or been at a restaurant where the hostess is being harassed by a patron who is positive his reservation got lost? These people are convinced they're in the right, too. They're also the most irritating human beings on the planet, and we don't make movies about them.

Admittedly, these examples are weak in comparison to the story that plagues our heroine Betty Anne Waters (Hilary Swank). Her brother Kenny (Sam Rockwell) has been convicted of murder and is spending life in prison. Betty Anne is attempting to work her way from not even having a GED to becoming a full-fledged lawyer to prove her brother's innocence. This is where the movie starts off, and I personally thank director Tony Goldwyn for not wasting any time and getting right to the heart of the story from the opening scene. It's effective filmmaking: Set the story in motion immediately, then backtrack and fill in what we need as we go along. 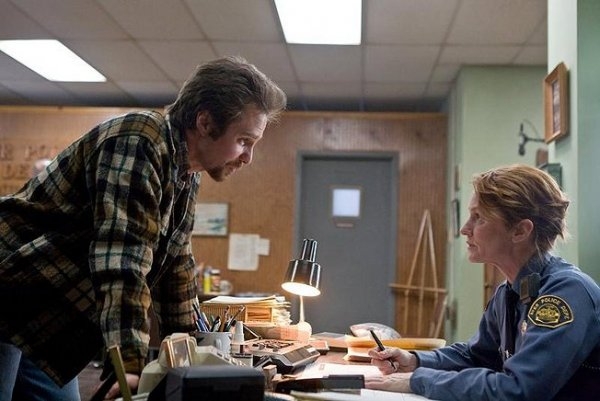 Rockwell needs to take these Oscar-baity roles to make up for the awards he didn't win for Moon.

This is, however, the only one of Goldwyn's risks that pay off. The other obvious and less effective leap of faith that he takes comes in the way he, Rockwell and Swank choose to portray the main characters. Regardless of whether he committed murder or not, there is certainly nothing in the first half of the film that makes Kenny Waters a decent person. He's actually kind of a scumbag, but that's apparently okay in this universe. Early on, we witness Kenny violently headbutt a man in a bar and threaten to cut out his eye with a beer bottle, but then minutes later, all is forgiven because Kenny drunkenly dances and strips naked on stage with the band, and suddenly everyone loves him again. This is actually a thing that happens in the movie. I recall the scene very distinctly in my head, and yet re-reading that sentence, I'm sure I must be making it up, because nothing that jaw-droppingly nonsensical would appear in an Oscar-season movie, right? Of course, this scene occurs after Betty Anne makes friends with the other older woman in her law class, Abra Rice (Minnie Driver), for no other reason than Abra demanded it happen. Right off the bat, we establish that no one in this film reacts or behaves like an average human being, so just go with it.

I have mixed feelings about this route with our main character. On the one hand, I want to give Goldwyn and Rockwell credit for not giving us a sappy, misunderstood wuss of a stereotype. On the other hand, it makes it really hard for the audience to root for him. This wouldn't be so bad, because Rockwell's character grows emotionally through the film. (And physically. Who actually gains weight eating prison food?) Betty Anne, meanwhile, grows more and more unbearable with each passing scene. We're supposed to be on her side, but she throws her non-imprisoned children aside and nearly loses them forever. She acts horribly toward everyone who tries to help her, and by the end of the film, not only has she graduated law school, but also she's graduated from harassing evidence bookkeepers and DNA testers to straight-up stalking teenage girls. You get the feeling that this film is trying so hard to portray Betty Anne as the next Erin Brockovich, but there's a huge difference between "Strong and Sassy" and "Kind of a Total Bitch." Julia Roberts knew this; Hilary Swank doesn't seem to.

Our two main characters have one giant issue in common with the rude people in the department store/restaurant from the first paragraph: A giant entitlement complex, which makes them nearly unrelatable and completely unlikable. Even in prison, Kenny seems to think he deserves some kind of special treatment. Betty Anne uses her story to get people to do stuff for her so often you wonder if the script was written to include recaps for people who come in late. Hell, the movie itself seems to feel entitled to praise. "I'm based on a true story, and I have critically acclaimed actors! Give me awards now!" The film seems to coast by on premise alone, and that premise is so flimsy it doesn't make up for a shoddy script. 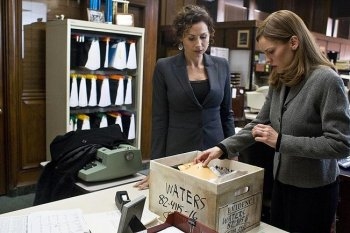 Remember when Minnie Driver was British?In fact, the script is set up so that Betty Anne is only a hero because (I'll guess I'll throw a spoiler alert in here) everything works out. If any one part of her case had gone wrong, this would be the story of a woman whose madness and refusal to accept that some things in life you simply can't control cost her everything she's ever held dear. In short, it would be a more interesting movie. But everything does fall into place, and so we're supposed to cheer her terrible behavior?

Example: A large plot point comes when Betty Anne discovers DNA testing, and is trying to locate the evidence file from her brother's case. The problem is that the case was 16 years ago, and evidence is destroyed every ten years. Asking to double-check is a rational thing to do. In this case, asking for a triple or quadruple check is okay, too. What crosses a line is calling the office daily, under multiple names, telling the office workers they're doing their jobs wrong, then showing up at the courthouse and bullying/guilting an old lady until she wastes her entire day finding a box that's old enough for a driver's license. But that's exactly what Betty Anne does, and wonder of wonder, miracle of miracles, she was right all along. The box was there, it was just under a magical enchantment that can only be broken when you compliment the office head's grandchildren. The entire movie works like this. Betty Anne does terrible things; she is rewarded, the audience cheers because the ends justify the means.

Conviction is a confused film. It can't decide if it wants to subvert tropes or follow them exactly. If Goldwyn wanted to make Betty Anne a tragic figure, he shouldn't have created a world where everything is perfect for her. If he wanted to make a standard triumph-of-the-heart film, then he should have given us someone to root for. You can't have it both ways. The film ends by telling us that there have been 248 overturned convictions so far based on DNA evidence. While that's wonderful, it overlooks the fact that there are also thousands more cases where things don't work out, where it turns out the guy in jail was the right guy. In a similar fashion, the film overlooks the same basic principle: Just because something is real, that doesn't mean you don't have to be realistic.

MINORITY REPORT: I have, on many occasions, been in a similar situation. I once confronted a judge -- I can't recall exactly why I was in the courtroom at the same time as the judge, probably something to do with that whole suicide-bombing fiasco; where was I? Ah yes, the judge had come to some kind of conclusion that I didn't agree with and so I took his gavel and shoved it up his arse, fat end first! Things got hazy after that and the next thing I knew I was walking free, with red stains on my newly acquired police officer's uniform. -Montague "Legally Sane" Smythe