EXPECTATIONS: Chris Morris has always been heralded as a genius of comedy, perhaps best known for courting controversy with the Brass Eye paedophile special. Now he's taking the step into feature films with another hot topic: terrorism. The fact that this is getting an American release at all, however limited, is amazing and I hope that the American public is ready to embrace it.

REALITY: Simply put, Four Lions is quite literally the funniest film of the year, and it will certainly be a hard one to top. Much like last year's In The Loop, Four Lions proves that the best comedy comes from Britain, and that we go to the cinema to learn the answers to important questions like "Is a wookie a bear?"

We follow the exploits of a group of Muslims planning to make a terrorist strike: Omar (Riz Ahmed), Waj (Kayvan Novak), Barry (Nigel Lyndsay) and Faisal (Adeel Akhtar) bumble their way through the making of a jihadi video, claiming responsibility for a strike that they haven't even planned or prepared for yet. When Omar gets the call from his uncle Imran in Pakistan, he and Waj leave for an Al Qaeda training camp, leaving Barry and Faisal behind to fend for themselves. After completely failing their task in Pakistan (thanks to the over-zealous use of a rocket launcher), Omar and Waj return to find that Barry has recruited a young idiot named Hassan (Arsher Ali) and made a plan for the group to bomb a mosque. It now lies to Omar to turn his team of incompetent retards into real martyrs for Islam. 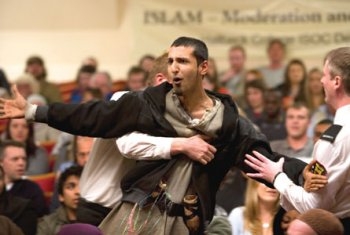 Political correctness gone mad!Is America ready for this film? Initial critical response seems to indicate a resounding "no," with cries of "too soon" being heard in every corner of the land. But, is that really the case? I don't believe so. What we have here is a film about the humanity of young Muslims who are misguided into committing suicide bomb attacks. I can understand why the American public would be somewhat apprehensive, but it justifies its own existence. As hilarious as Four Lions is, it is also an emotionally wrenching experience.

Each of the leads is convinced, for the most part, that he is doing the right thing at every turn, thanks to fearless leader Omar. If it weren't for Riz Ahmed's performance, it would be hard to relate to a character like that. His interactions with the group and with his family cement his character as the emotional centre of the film. The fact that the final act basically revolves around some crisis of conscience for his having led the simple Waj to his death is what makes the film loom over its audience long after the credits have rolled.

If the film could be said to have a villain, Barry certainly fills that space. He is essentially a sociopath who sees his Jihad as an excuse to blow something up to make some kind of obscure statement. He often slips into uncontrollable rage and flies off on ridiculous rants about people playing stringed instruments, dogs contradicting Islam, spark plugs being Jewish and Jaffa oranges buying nukes for Israel. It's impossible to be angry with the rest of the guys when this spanner is in their midst, itching for a chance to take command. 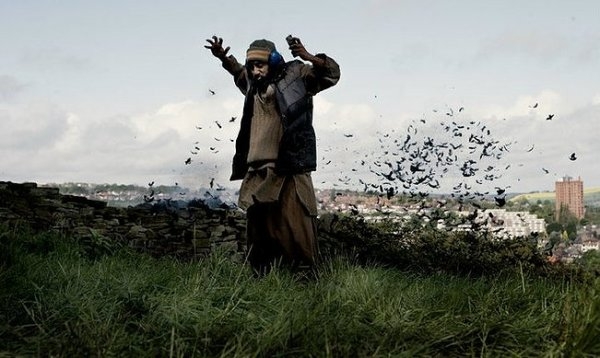 Scenes like this will guarantee this film's place in history.

In the middle of all the comedic mayhem, Morris takes aim with his satirical bazooka at such topical targets as police incompetence and the ineffective nature of surveillance culture. It's a bold statement to make, but one that needs to be made. Put simply, we cannot hope to fight a war on terrorism when the people committing the crimes are not the well-organized groups of carefully selected soldiers we think they are, but are simply small teams of silly buggers doing what they think is right in the spur of the moment.

But let's not dwell on things like messages and emotional depth. I know what you're all wondering. Is Four Lions the funniest film since The Hangover? Well, I've never seen The Hangover, but in the very, very long list of films released between then and now that are funnier than Due Date, Four Lions is so close to the top of that list that it certainly deserves the recognition.