EXPECTATIONS: Harold Gorman, Hollywood Foreman, takes a sip of his scotch and flips through the newest issue of Variety. His assistant Kevin, trembles in the corner.

"Kenny, look at this! Look at these things we got comin'! We got people doing all this sci-fi, and people doing things with 3D cameras, and all of it looks really... original. We gotta do somethin' about this!"

Kevin shrugs. "We could put out five more wedding movies."

Gorman shakes his head. "Nah, we did that last year, and Kate Hudson still won't return my calls. No, Keith, what we need is a BWBP production."

Harold nods. "A successful film... But With Black People!" Kevin flips to his remake folder. "Well, we've got this Craig Robinson thing that was made a few years ago. I mean, it's basically Meet the Parents." 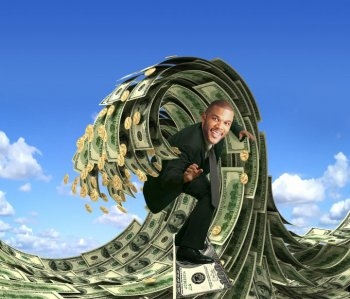 Harold strokes his chin. "Think we can slap Tyler Perry's name on it?"

At that moment, a tidal wave made of $100 bills reaches its crest outside Harold's third-story office. At its peak sits Tyler Perry, riding a surfboard like an X-Treme '90s Scrooge McDuck. Kevin checks his watch. "Well, he should be by in a minute, let's ask him."

"Hey, Tyler!" Harold yells out the window as the wave passes. "You want in on this?"

"Well, that settles that."

REALITY: Look, guys, we've been over this. If you're making a romantic comedy, you should try to make romantic and/or comedic. I should leave the theater feeling amused and a little warm-and-fuzzy. Peeples left me filled with hatred and disgust and disappointment. I'll give it this, though: I've seen a lot of films where the leading couple inspires no enthusiasm or interest whatsoever. But Peeples is the first film I've seen in a long time where 15 minutes in, I was actively rooting for them to break up.

Peeples starts off with children's entertainer Wade Walker (Craig Robinson) wondering why his girlfriend Grace (Kerry Washington), has never introduced him to her family, despite their living together and being in a relationship for more than a year. When Grace joins her family in the Hamptons for a holiday party that's Moby Dick-themed for some reason, Wade decides to surprise her and join them so he can propose. There he learns that not only has she not introduced him, but also the family doesn't even know who he is, or that Grace had a boyfriend.


For some reason, this leads to wacky hijinks in which Wade tries to win the approval of her father Virgil (David Alan Grier), instead of him dumping her ass on the spot. See, that's a pretty big thing to be keeping from your significant other for no real reason. It makes Grace and Wade a pretty terrible couple, and there's no reason to root for them. I enjoy everyone involved in this film in all of their other projects, so it's tempting to say that they deserve better than this. Then the film goes on, and it's clear that no, no they do not. 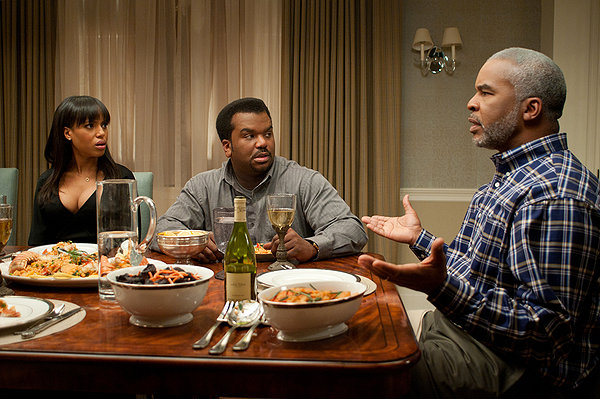 Oh no, everybody is making the "grandpa said something offensive" face.

Let's be direct here: I hated Peeples. It's 95 minutes of shame and disgust. It's also going to be the new favorite film of Men's Rights Activists everywhere, despite (or possibly because of) the fact that it was written and directed by a woman. The female characters in this film are all so positively loathsome, I'm forcing myself to remember that the men are pretty terrible too, so that I don't come out of this totally misogynistic.


See, not only is Grace apparently completely ashamed of Wade, but also she has the audacity to not understand why he's upset by this. At one point, Virgil accuses Wade of stealing, and Grace actually sides with her father, and Wade still doesn't dump her. Wade is a passive-aggressive desperate wimp, and Grace is a self-centered harpy with super-creepy daddy issues. Their entire relationship is based on unneeded lies, including lies about their own appearance. Ladies, I will never tell you what to do with your bodies and your relationships.... except for right now: If your boobs are fake, you should probably tell a dude before he proposes to you.

There's also a subplot involving Grace's sister Gloria (Kali Hawk): She's in a multi-year lesbian relationship with her partner Meg (Kimrie Lewis-Davis), but she refuses to tell her family because she's not sure whether she's "just going through a phase." Instead of dumping her ass on the spot, Meg actually suggests she should try to hook up with a man, Wade's brother Chris (Malcolm Barrett), to prove it to herself. When Gloria tries to, despite the suggestion being something said facetiously during an argument, Meg is not only cool with it, she lets Chris watch them have sex.

It blows my mind, that in 2013, anyone can still think that two women can only have sex if it is for the entertainment of a man. It's both homophobic and fetishistic. Hell, at one point an elderly woman actually says "I don't understand girl/girl things. Where's the pleasure in that?" To which Chris responds "Oh, I'll explain it to you. I'm-a need a couple of pairs of scissors, though, and a wet sponge." This is a thing that happens in Peeples, a movie people made in the 21st century in exchange for money. 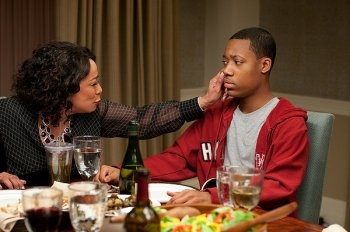 Oh hey, it's a young Chris Rock.Speaking of people watching other people doin' it, let's talk about the creepy daddy-daughter relationship that is the main point of this movie.The film goes on and on about Grace putting Daddy on a pedestal, and how she's Daddy's favorite, and they have a special relationship. I... I honestly believe these two want to fuck more than any other two people in the movie. It's not subtle, really, especially when Wade finds out that all of Grace's past boyfriends were men in their sixties.

At one point, Virgil peeks through the guest-house window to see Wade and Grace role playing. He pretends to be disgusted by it, then looks back to watch some more. Then he makes threatening references to it at the breakfast table the next morning. As a reminder, this film is supposed to be a romantic comedy, not a Cinemax murder movie. Dude, your daughter is an adult, in her thirties, and you are peeking in her windows. There comes a point where the "Oh, my little girl is pure and virginal" crap becomes pretty damn creepy, and when she graduates Law School, that point has pretty well passed.

Tyler Perry may have attached his name to Peeples, but the film feels completely unrelated to the stuff he actually writes and directs. Those all have climaxes, and rising and falling action, and conclusions, and basic narrative structure. The film tries to portray Virgil as an asshole, and then it never gives him any comeuppance. All he really has to do is say "I'm sorry" and everyone forgives that he is destroying his family's lives. Ha ha, Mom has a crippling drug addiction that stems directly from the fact that she misses the '70s, before her controlling husband took away everything she was passionate about! Isn't that hilarious? What a rascal!


Peeples begins and ends with Craig Robinson singing a song about not peeing your pants to a group of children who are all at least eight years old. I'm a little worried that the director felt for some reason that none of these kids were already potty-trained. This leads me to believe that these scenes serve as a metaphor for the whole film: Like Wade's music, it's pandering, unfunny, and pretty disgusting.

MINORITY REPORT: For months, this poster was the only thing I knew about Peeples. Every time I thought about the film (admittedly, not often), I imagined Craig Robinson stepping on a jellyfish and making that face. It's good to know that that's exactly what the poster was trying to convey: 95 minutes of searing pain.. - Joseph "Jay Dub" Wade