EXPECTATIONS: While it was cool at first to hear Public Enemy's "Welcome to the Terrordome" finally pop up in a horror trailer, it was fairly fucking unwelcome when it turned out to be an apparent [Genre] Movie-type shitfest. Granted, the Date/Epic/Disaster Movie team has nothing to do with this one, and Marlon Wayans has at least participated in decent parody films in the past. But on the Wayans spoof spectrum, this one looks less like I'm Gonna Git You Sucka and more like Don't Be A Menace to South Central While Drinking Your Juice in the Hood. Still, it will almost certainly be more entertaining (and frightening!) than the abysmal Paranormal Activity franchise it's mocking.

REALITY: Within the first five minutes of A Haunted House, a dog gets hit by a car and dies. Later, a stepfather beats an eight-year-old girl with a belt. Normally these events wouldn't be funny, and here, they're still not funny. The crowd remained totally silent during both scenes, and these people came to laugh! You should have heard them during the fart scene. 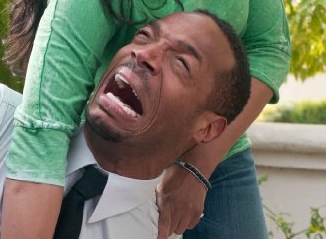 It's funny because his dog died! hahaha ha. ha. ha.Marlon Wayans plays Malcolm, who buys a video camera to document his domestic bliss with newly arrived live-in girlfriend Kisha. There's plenty of room for Kisha's stuff, even though she admits to being a hoarder, because Malcolm owns a mansion so impressive that the racist camera-installers continually scoff that he can't be the real owner. What does he do for a living? Don't ask questions at any point during A Haunted Movie. We can rule out "basketball player," though, because he says he's not one when questioned by a gay-stereotype psychic.

Some might find this lisping, leering gay-psychic character appalling, not to mention the drug-dealing, Spanish-speaking maid and the "Mandingo Party"-throwing swinger neighbors. But A Haunted House puts some progressive twists on horror-movie tropes! For one thing, there's equal opportunity partial-nudity; in fact, I'm pretty sure we see a lot more naked dude than gratuitous boob. And the ghost sexually violates both Kisha and Malcolm, though Kisha enjoys hers. Hmm.

The Paranormal Activity movies draw crude gender lines: the men are stupidly aggressive brutes while the women are whiny, helpless and credulous. By contrast, in A Haunted House Kisha performs a touchdown-dance of a taunt after landing a kick to the "ghost balls," whereas Malcolm flees and shrieks at the first spooky sound while Kisha faces the camera and says "really?" 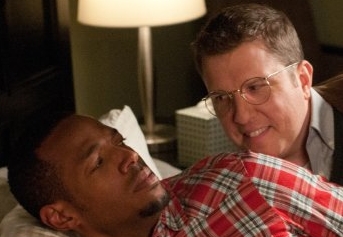 It's funny because the psychic dude is gay! hahaha ha. ha. ha.Malcolm may not strut around shaking his fist at an invisible spirit and basically yelling "come on ghost, you want some of this?" like his Paranormal Activity male-lead counterparts, but he does invite his "thug cousin" Ray-Ray to come in guns blazing. Is the one-sided confrontational banter that follows a direct, knowing jab at Paranormal Activity's idiotic machismo, or just a broad "thug walks into a haunted house" gag? It's immaterial, really. It's intentional humor paralleling unintentional humor, probably unintentionally. When A Haunted House really wants to let you know that it's copying a scene, we get something like its scatological take on the Blair Witch Project's face-the-corner closer.

At one point, someone warns the movie's co-writer Wayans (in the guise of his Malcolm character) "don't get any funny ideas." "I definitely won't," he responds. While it's convenient when an out-of-context quote provides a neat summary of an entire film, it's not entirely fair to say Wayans didn't have any funny ideas. Malcolm makes a dance-video montage out of possessed-Kisha's antics. Malcolm and Kisha ridicule the "illiterate bitch-ass ghost" for spelling out "G-O-S-T" on the Ouija board. And Malcolm displays a "Saints Row The Third" poster in nearly every room in his house; spotting them all provided a welcome distraction from what the characters were doing and saying.

The Paranormal Activity movies offered lame gimmicks galore, and A Haunted House takes a crack at them. After rigging a camera to a rotary fan as seen in Paranormal Activity 3, Malcolm quips "call me Nigguyver!" As racially charged portmanteaus go, this ranks below Cedric The Entertainer's Black Rambo "Blambo" from Code Name: The Cleaner, but Cedric doesn't show up until the final act, so they might as well kill time with bad imitations of his old routines until he finally arrives. 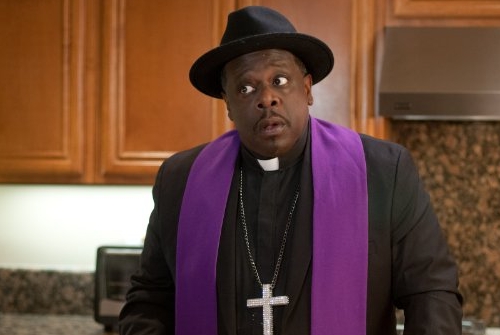 You want me to say what now?

Cedric's makeshift exorcist Father Doug greets the deranged, ashen Kisha with "how you doin,' crazy bitch?" Before long he's quoting Snakes on a Plane and flashing a butterfly tramp-stamp tattoo, because this is how Wayans, co-writer Rick Alvarez and director Michael Teddes think to use him. He's also casually amusing when riffing (probably) off-script, but the filmmakers clearly weren't sure how to handle this. When Malcolm asks him if he wants some water, he scowls and responds "I don't drink that bullshit." It's a weird, funny exchange; it's also buried in the credits bloopers.

The first preview before A Haunted House was Scary Movie 5, and the main punchline there was that Charlie Sheen and Lindsay Lohan appeared as Charlie Sheen and Lindsay Lohan. The contrast flatters A Haunted House; rather than taking the Referencing That A Thing Exists Counts As Parody approach, Wayans and Tiddes tried skits that involved actual ideas. These skits seldom worked, but in the creatively bankrupt broad-parody/found-footage/broad-parody-of-found-footage genres, anything approaching originality or even competence puts you near the top of the pile.

MINORITY REPORT: A remake of Paranormal Activity that replaces scares with farts would be almost identical, really. Considering the whole film is just a story about a failing relationship, having the reason be rampant flatulence isn't a departure from an invisible demon that one person in the relationship is outraged by and the other barely notices. - Ian "Professor Clumsy" Maddison