REALITY: I'm going to have to tread lightly here, because reviewing Any Day Now at all feels like polishing a landmine. This is a film that's in turns uplifting (in the Hallmark Channel sense of the word) and deeply depressing. The fact that it's based on a true story, and that its message hasn't already sunk in with so many, is enough to make a person lose faith in humanity. Then again, the film's two leads go a long way in restoring, and even bolstering, that faith.

Set in 1979, the film stars Alan Cumming as Rudy, a drag performer in a West Hollywood disco bar. One night he comes home to find that his junkie neighbor has disappeared, leaving her teenage son Marco (Isaac Leyva), who has Down Syndrome, all alone. Rudy takes Marco to see Paul (Garret Dillahunt), an attorney Rudy had just met at the bar the night before. Rudy and Paul soon strike up a relationship, and decide it's in everyone's best interest to try and build a nurturing environment for Marco. Their ensuing custody battle against the state of California, spearheaded by a classically slimy lawyer (Gregg Henry), hinges around whether their same-sex relationship can be deemed appropriate for a boy in Marco's situation. 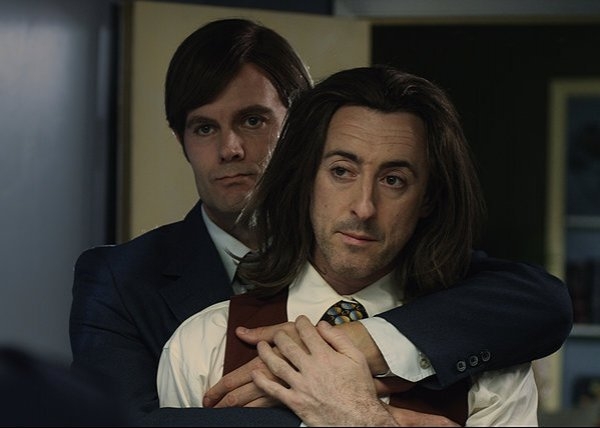 How do two men with such ridiculous hair ever fall for each other?

That's not to short-change the rest of the cast. Garret Dillahunt brings a quiet sort of cool to his performance as Paul, a closeted gay man terrified that Rudy is going to cost him his job at the District Attorney's office. He's the steady, fatherly influence that Rudy seems to be looking for, not just for Marco but also perhaps for himself. He seems utterly unaware that he's wearing a Justin Bieber wig, but for the most part he works as the film's moral center. Isaac Leyva, too, is good in a largely thankless role as the film's emotional punching bag. They could have easily turned to Leyva for visual shorthand as to the emotion of a given scene, but it's to his credit as a performer (and Travis Fine's as a director) that the film doesn't need to. Leyva's scenes with Cumming and Dillahunt offer a depth of range that many of the film's other scenes simply can't match. 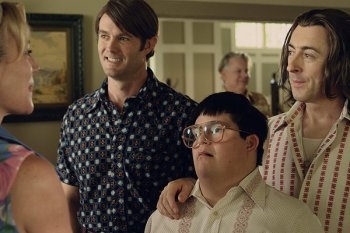 But what will this do to America!?The lion's share of the story involves Rudy and Paul kindling their relationship through Marco, and offering him the home life he never had. The film coasts along down the path toward happiness for a while, and everything seems fine. We're quickly reminded, though, that this is the 1970s, and gay tolerance has a long, long way to go. That's when the film starts hitting us with a number of roadblocks. Marco's mother is out of jail; she's filed a restraining order against Rudy and Paul; the DA's office frowns upon Rudy wearing a dress for Halloween; the list goes on and on, but most of the roadblocks involve Rudy and Paul being lovers and the fact that their relationship "could be assumed by Marco to be normal," as one judge puts it. It's a scene written specifically to make any decent human being's blood boil.

It's at this point that the film very nearly Blind Sides itself. During a heated interrogation, Rudy is asked why he cares so deeply for Marco. Is he really looking out for the boy's best interest, or is there some ulterior motive involved? Thankfully, the film never fully pursues this line of inquiry. Where The Blind Side asked itself the question and then let Sandra Bullock hem and haw her way to an Oscar, Any Day Now takes offense at the mere suggestion. Love doesn't need an ulterior motive*, which Rudy all but spells out as he sings the title of the movie over the end credits.

My joke bag is empty on this one. Any Day Now, while at times getting too caught up in its own melodrama, is well worth seeking out. It's the human touch that really saves this film. The strength of its performers is more than enough to carry it through its occasional dips into maudlin wailing. The Academy may have ignored this one, but I'm sure it'll find a proper audience once it hits DVD.

*That one's free, Hollywood. Go on, take it.

MINORITY REPORT: Of course the Academy ignored this one, it wasn't generating buzz months before it was released. That's the unwritten rule of the Oscars: if Academy voters haven't decided on it before they've seen it, it's not getting a nomination. - Ian "Professor Clumsy" Maddison