EXPECTATIONS: In the spectrum of artistic treatments of 9/11, Zero Dark Thirty will probably rest comfortably between World Trade Center and tribute.wmv. And, yes, tribute.wmv is on the high end.

REALITY: Man, it must have been difficult for director Kathryn Bigelow and writer Mark Boal to resist the urge to fashion a reasonably entertaining action-thriller from the hunt for Osama bin Laden. While Zero Dark Thirty has its own set of problems, chief of which are its necessary-evil attitudes toward torture and the advice of self-help author Tony Robbins, I'll give Bigelow and Boal this much: They've made an honorable film that bravely endeavors to portray the world's greatest manhunt as a goddamn boring bureaucratic nightmare. After all, if you're tasked with paring ten years of spy games down to fewer than three hours and your dominant inclination is to alienate the audience -- well, that's artistic integrity. Take that, Mr. Bond. 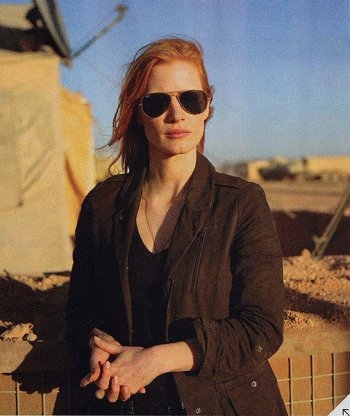 Nobody takes you seriously in a warzone until you get a cool pair of shades.A year after bin Laden's death, something like America Unchained apparently wouldn't suffice. So, while Boal fudges a little history to get it down to feature-length, it's important that Zero Dark Thirty begins on a black screen with audio clips from 9/11 and cold-cuts to a CIA black site at which interrogator Dan (Jason Clarke) is busy getting his torture on. When fellow agent Maya (Jessica Chastain), fresh off the plane, walks into Dan's dusty abode, Zero Dark Thirty launches into the longest montage in Hollywood history, 40 minutes of seemingly disconnected episodes adapted from seven years of history that plays like a "previously on..." for real life.

At this point, Dan slips into the supporting players while Maya -- impossibly white, amidst a cast of characters ranging from tan to brown, for those who are paying attention -- asserts herself as our protagonist, reiterating the popular post-9/11 narrative established by Homeland: Our last hope in the so-called war on terror will forever be a pint-sized porcelain doll with an obsessive edge and an unwavering certainty, the dark-world manic pixie dream girl who sees what well-dressed white men in windowless rooms cannot. Interesting, what this narrative says about our amorphous cultural value system in the decade after 9/11, that only outsiders (white women in traditionally male-dominated occupations) can catch outsiders (violent radicals who twist the Muslim faith to meet their own perspectives) -- essentially, "it takes one to know one." Hmmm.

Anyway, this middle hour is the closest Zero Dark Thirty ever gets to becoming a spy thriller, as CIA agents try to guess who's living in a compound on the outskirts of Abbottabad. Real exciting stuff, that. I mean, you'll never guess who lives there! And Zero Dark Thirty gets even less exciting when it's time for the Navy SEALs to raid the compound, a sequence that plays out almost in real time as we struggle to see what the SEALs see between bursts from their muted submachine guns. We, the audience, share the frustrations of anyone who opposes the SEALs, who come off like the geeky Adderall-boosted 13-year-olds who exist only to gank people in Call of Duty. By the time we figure out what they're doing, their targets are already dead.

So, yeah, while I respect Zero Dark Thirty's narrative and aesthetic commitments to verisimilitude -- that's more than I can say for The Hurt Locker, anyway -- I'm bewildered by its purpose and point. If it's to faithfully document the exhaustive work that went into catching bin Laden, it's too short at 157 minutes, 40 of which are spent recapping the first season of The Dukes of Abottabad. Maybe it's a formal experiment in tossing The Hurt Locker's low-ish budget and pseudodocumentary feel at a story that's certainly truer than The Hurt Locker's high fantasy. (Fun fact: One for the Money and A Thousand Words were each made with $40 million budgets -- twice as much as Zero Dark Thirty.)

This film is shot through with so many provocative, maybe backward-thinking statements regarding torture, race and gender that it's either a product of or a criticism of our culture, depending on how you look at it, but it never commits to being either. Zero Dark Thirty simply is. It's a film that exists, just as 9/11 was something that happened, and while artists scurry about trying to milk meaning from tragedy, clamoring to be the artist who decoded the great truth of 9/11 (Jonathan Safran Foer, I'm looking at you), films like Zero Dark Thirty and United 93 basically observe and leave the meaning-finding for later. After all, America Unchained is still one hundred years off.

MINORITY REPORT: The commercials for ZDT that they show during football games don't say anything about a Jessica Whatsherface. There must be some other more awesome ZDT out there with some sweet kills and some bitchin' tunes. ...Right? - Joe "Sixpack" America