I Spit on Your Grave 2

EXPECTATIONS: I have to tread carefully here. I don't want to say director Steven R. Monroe's 2010 remake of I Spit on Your Grave is good per se, but it's the best possible version of a rotten narrative, one that, as the late Roger Ebert wrote in his 1980 review of the original, "is nothing more or less than a series of attacks on the girl and then her attacks on the men, interrupted only by an unbelievably grotesque and inappropriate scene in which she enters a church and asks forgiveness for the murders she plans to commit." Basically, the remake was "better" because it offered increased production values and a reduced rape-to-revenge ratio (less rape, more revenge). Ugh, I can't believe I just wrote that.


Anyway, Monroe has apparently chosen to keep wallowing in the filth with the direct-to-VOD I Spit on Your Grave 2. Ian won't let anyone near his precious Insidious: Chapter 2, so I'm stuck with this. Down and out at the Current Releases Office.

REALITY: It's really easy to get offended by a movie. It's also really easy to do some soapbox moralizing when a film includes multiple rapes and its carefully cultivated reputation attracts armchair sadists. Hell, that Ebert quote above comes from a review in which he does both and, frankly, sounds a little ridiculous, like a street-corner preacher singing Armageddon.

I don't know if Ebert ever changed his mind about I Spit on Your Grave, which was originally known as Day of the Woman, but I do know that in the decades since, some have championed it as a feminist film that does nothing to glorify rape. In fact, its director eventually said he was inspired to make the film after he observed how a real rape victim is treated by the system, questioned by police before receiving medical attention and such. 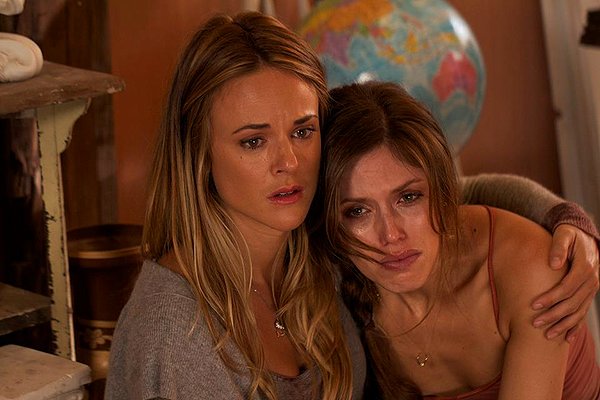 My God, it was horrible! They spat on my grave!


So, depending on who you ask, that no-budget 1978 film is either a repulsive act of exploitation or the first piece of rape-victim wish-fulfillment. I tend to think it's both; also, it's muddled, misunderstood, problematic and poorly made. Any time a film includes, like, an hour of rape, it's got a lot to make up for in other departments or critics will start to wonder exactly who the film is made for. Day of the Woman had little else going for it, whereas its remake shortened the rape to the point where it almost feels like maybe it could be seen as "non-exploitative."


Enter I Spit on Your Grave 2. The act of watching this film became what could best be described as meta-watching. Hyperawareness of the dubious rape-revenge mechanics underlying the film prevented me from ever losing myself in the plot, caring about the characters or gaining even the slightest catharsis from the victim's final-act rampage.

For example, early in the film, aspiring model Katie (Jemma Dallender), a farm girl new to NYC, attends a free photo shoot in a loft apparently operated by Taken extras -- y'know, Eastern European tracksuit types, Bulgarian to be exact. They pressure her to model nude, she resists. I've steeled myself to endure the ensuing rape scene. It doesn't happen. She goes home and helps her apartment superintendent set a rat trap. The guy seems too nice. Steeling myself again. No rape scene.


Later that night, Georgy (Yavor Baharov), the only Bulgarian who'd been nice to her, sneaks into her apartment and takes photos of her while she sleeps. She wakes up. He rapes her. Maybe this will be the only rape scene? Then he calls his brother over. Now I'm expecting a gang rape. But, nope, Georgy's brother berates him for being a sick bastard/rapist and tries to administer a Ketamine overdose, presumably to kill her. But maybe it won't kill her and she'll wake up and begin plotting her revenge? Wrong again, Sean.

Katie regains consciousness on a blood-stained mattress in some concrete basement, having been sold into sexual slavery. Dehydrated, she begs for water. "You're thirsty?" one man asks before pissing on her. "Drink that, bitch." To punish her after an escape attempt, another man puts a cattle prod everywhere a cattle prod shouldn't go. Later, she finds out they managed to transport her all the way to actual-Bulgaria while she was in the K-hole.

On some dim-witted level, I guess you could argue I Spit on Your Grave 2 is, like Taken, a stab at raising awareness of the horrors of international sex trafficking. But why argue about I Spit on Your Grave 2 at all? This is a film stripped of subtext and meaning. I cannot conceive of an intellectual argument that could support its existence. Even the most interesting subtext of these films, that well-educated middle- to upper-class victims are secretly more creatively sadistic than their savage antagonists once they get around to concocting revenge, is lost because, as we're reminded time and time again, Katie is just a simple salt-of-the-earth farm girl way over her head in the Big Apple.


Her revenge, when it finally arrives far too late in the film, isn't all that elaborate, but it sure is ugly. I don't know why screenwriters Neil Elman and Thomas Fenton have sacrificed the subtext that drove the previous I Spit on Your Grave movies, Straw Dogs, The Last House on the Left, etc., but there you have it: The rapists here are the creative sadists, and their crimes are filmed in fragmented closeups with lots of nudity, one of the hallmarks of male-oriented exploitation films.

This is the first I Spit on Your Grave film that lacks any ambiguity when it comes to declaring intended viewers to be sexual sadists. This is a film more about a wide, creative spectrum of sexual humiliation, degradation, rape and atrocity than it is about the revenge. This is a film that asks the viewer to celebrate the filmmakers' creativity when it comes to expanding the parameters of cinematic rape. I doubt there's a rape victim in the world that will seek out I Spit on Your Grave 2 and find any catharsis in the rapists' inevitable comeuppance because there's just so much goddamn rape and rape-like activities preceding it.


Here's where I start spoiling things: Katie's revenge amounts to smearing rat shit on one man's open wounds and letting him die slowly of infection in the Bulgarian sewers; drowning another man in a shit-filled nightclub toilet; electrocuting Mr. Cattle Prod; and squeezing a fourth man's balls in a vise until they pop while his mother watches. I might be missing a couple, but the point is, none of it is as unfortunately memorable or belabored as the horrible, horrible acts visited upon Katie.

This is a Saw film without the lovably convoluted plotting; A Serbian Film without the political metaphor; The Hills Have Eyes '06 without the satire. Yes, it's offensive. Yes, it's repulsive. But there are films that justify their capacity to offend and repulse by offering some measure of artistic value. Blue Velvet comes to mind. So does Irreversible. I Spit on Your Grave 2 is a film with little, if anything, to say, offer or do besides exploiting an unknown actress' willingness to do anything, however degrading, to appear in a film with a built-in audience. The sad fucking irony is, like Camille Keaton and Sarah Butler before her, Dallender's career is most likely DOA because she'll forever be branded as "that actress who was in an I Spit on Your Grave movie." Ask yourself this: How many rape-revenge films feature a known actress as the victim? The answer is very fucking few. And there's a damn good reason for that.

MINORITY REPORT: Are we all gonna gloss over the fact that during this series of otherwise excellent points, Sean attempted to justify the existence of A Serbian Film? No one's gonna say anything about that? Okay, that's cool. - Martin R. "Vargo" Schneider