EXPECTATIONS: On the one hand, Wong Kar-wai is a director whose name should be enough to sell any film, and the prospect of him applying his style to a kung fu picture is a fascinating one indeed. On the other hand, the version of The Grandmaster screening Stateside is missing more than 20 minutes of footage, a trimming mandated by Harvey Weinstein, who seems to have a pretty good idea of how many foreign things American audiences will tolerate before walking out in a huff. Color me conflicted.

REALITY: As we've probably said a dozen times around here, the hardest part about any biopic is whittling a person's life down to its key elements and molding them into a cohesive, compelling narrative. While Wong Kar-wai revels in his film's kung fu trappings, offering some of 2013's most stunning action sequences, The Grandmaster's story abruptly changes course, seemingly on a whim. As a result, the whole film feels like we're watching the director channel-surf on a Sunday afternoon, lazily searching for something compelling enough to stick. 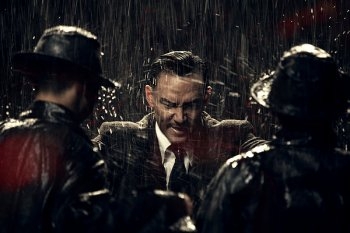 Nothing prettier than punching people in the rain.The Grandmaster recounts the oft-told story of kung fu master Ip Man (Tony Leung), who trained Bruce Lee in a later part of his life this film doesn't depict. I'm including this piece of information, though, because it's clearly vital to our understanding of the film. Every poster, trailer, and review this side of the Pacific mentions the fact, because it's apparently the only selling point anyone can come up with. The film even ends with a title card explaining that Bruce Lee was Ip Man's most famous student, a last-ditch effort to make us connect with the movie we just watched.

The film opens in 1936, as Ip Man is chosen by the Southern masters to represent them against Northern master Gong Yutian. After defeating him in a match of wits, Ip Man is confronted by Gong Er (Ziyi Zhang), the master's daughter. She defeats him in a sparring contest, prompting him to ask for a rematch when he travels to the North. Before Ip Man can make the journey, however, the Japanese invade, forcing him into poverty. After losing his family during the occupation, Ip Man travels to Hong Kong to establish a martial arts school. He makes a name for himself among the other schools, but longs to reconnect with Gong Er.

Wong Kar-wai doesn't seem particularly concerned with the details of Ip Man's life, opting instead to couch the broad strokes of a biography in a number of fight sequences, allowing these fights to dictate the flow of the story. In fact, calling The Grandmaster a biopic in the traditional sense might be a misnomer entirely. The film is broken up into a few distinct chapters, each punctuated by the main characters posing for a photograph. This may be the most elegant visual metaphor for the passage of time I've ever seen in a film.

The film's fight scenes are beautifully photographed, and no two look the same. It opens with a brawl in the middle of a torrential downpour, continues to a quiet fistfight on the stairs of a brothel, and concludes with a snowy confrontation at a train station. These fights do just as much to inform us of Ip Man's journey as the title cards that explicitly state what's going on.

The way Wong shoots these fights is equally unique. Rather than filming everything in a single wide shot to present the full ballet of fisticuffs, he gets his camera in close and slows things down. This way, we see every step and turn involved; every thrown punch feels significant, and every fall crashes like thunder. With famed fight choreographer Yuen Woo Ping calling the shots, The Grandmaster features some wonderful wire-fu action. 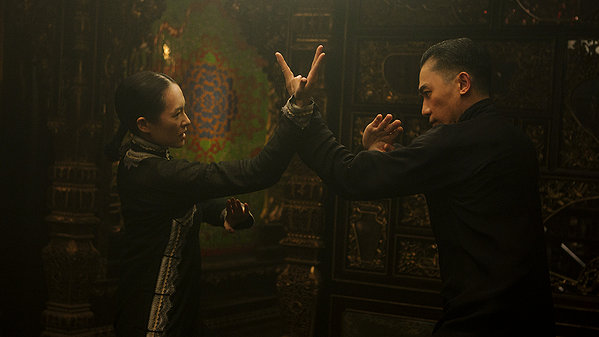 It's a punchy-kick film, you know?


But as captivating as the punches and kicks may be, they aren't quite enough to make up for a story so flimsy it seems to twist in the wind. At a certain point, we leave Ip Man in favor of a lengthy passage during which Gong Er seeks vengeance for the death of her father. While this portion of the film is every bit as engaging and potent as the rest, it leaves The Grandmaster feeling like a series of vignettes rather than a cohesive whole. Perhaps I'm looking for a structure that isn't there. I'd like to believe this film's disjointedness is a result of missing footage, and not the failure of the film to connect.

The title cards aren't much help either. While they do guide us through the segments that have clearly been truncated, the name cards are wholly unnecessary. In at least two instances, the film will identify a new character mere seconds before someone calls them by name. I know Harvey Weinstein thinks I'm a rock-headed neanderthal, but this feels a little excessive. I would ask to see the longer, original cut of this film, but I feel like I'd somehow end up seeing an even shorter film in which every kung fu master wears nametags and talks almost exclusively about Ip Man's most famous student, Bruce Lee.

MINORITY REPORT: I don't believe any of this is true. Dragon: The Bruce Lee Story didn't mention anything about any Ip men. - Ian "Professor Clumsy" Maddison