EXPECTATIONS: I'm not exactly sure why people still care about Luc Besson's name being attached to stuff, or even if they do. The man hasn't made a good movie since 1997. He has, admittedly, created a few popular action franchises, but it doesn't take a whole lot of mental gymnastics to write a script consisting of "Liam Neeson/Jason Statham punches a bunch of people." In addition, Robert De Niro only cares about what he's doing about 20% of the time anymore, and that's being generous. This is the second time this year I've been subjected to him as the patriarch of a wacky dysfunctional family, so I beg you: When does the madness stop?

REALITY: Halfway through this film, Witness Protection Agent Robert Stansfield (Tommy Lee Jones) is reading the memoirs of his charge, former mob boss Giovanni Manzoni (De Niro). He delivers the supposedly ominous-sounding line "I can't wait to see how it ends," but by that point I was completely with him. Except I didn't care how it ended, I only cared that it ended... soon, instead of dragging me along for another hour like it did. 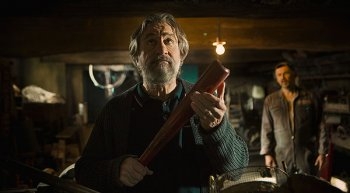 Imagine if anyone still cared about Robert De Niro.

The Family in question is Giovanni's, the "Blake" family, who has been in Witness Protection for the past six years after Giovanni snitched on crime boss Don Luchese (Stan Carp). Unable to restrain their sadistic urges for more than a few months at a time, the Blakes find themselves on the move quite often, this time landing in a small town in Normandy. No one has cell phones, and kids still listen to music on Discmans, so I'm assuming Besson is just wistfully imagining he's still in 1990s France. Anyway, while not really trying to blend in, the Blake family beats people up and breaks their stuff. ...And really, that's about it. That's like, 90% of the movie.

No, I'm serious, that's all that happens in this movie. A plumber is late and tries to rip Giovanni off, so he breaks the plumber's legs with a baseball bat. Some people at a store are rude to family matriarch Maggie (Michelle Pfeiffer), so she blows up the store. The youngest child, Warren (John D'Leo), is bullied at school, so he puts together an elaborate scheme of bribery and baseball-card forging so he can convince a rugby team to attack the bullies. A creepy, leering boy tries to get handsy with teenage daughter Belle (Dianna Agron), so she breaks his nose with a tennis racket. While that last one is at least entertaining, the fact remains that this is pretty much all that happens for most of the movie. There are tenuous threads of continuity like Belle's seduction of a student teacher and Giovanni's attempts at being a writer, but mainly it's just a tedious series of overreactions involving violent acts.

When it's not being boring, The Family abruptly shifts its tone to absolutely, ridiculously, eye-rollingly stupid. For example, the Blakes' location is eventually found out because Warren turns a joke that he overheard at a mob barbecue as a child into school-paper writing fodder. Through a series of increasingly sillier random events, the school paper finds its way into the hands of Luchese in Riker's penitentiary, all the way on the other side of the world, where he recognizes the incredibly common pun that he made seven years ago. Apparently halfway through the script, Besson realized that something had to happen in this movie sooner or later, and he decided to pick the dumbest possible catalyst for it.


This is just the tip of the stupidity iceberg. At one point, Giovanni is asked to speak in front of a film society, with Stansfield in tow to make sure he doesn't say anything stupid. Coincidentally, the film society is sent the wrong movie, and so Robert DeNiro, in character as a mob boss, attends a screening and discussion of the film Goodfellas, which he himself is in. At first I thought Besson was going to use DeNiro to dissect Scorsese, because that would at least be interesting, but no such luck. This is kind of like that scene in Ocean's 12 where Julia Roberts' character pretends to be Julia Roberts, but it's actually worse. At least the purpose of that was to make something happen.

There are a handful of parts in this movie that feel like they should work. De Niro and Jones exchange some amusingly cranky banter; Pfeiffer and Agron's performances are both great; and there's about five minutes of interesting action. All of this is lost in an incoherent mess, for which I'll blame Besson.


When your film has no sense of tone or structure, and you try to head into darker territory, no one knows how to take that. In one scene, Maggie is cornered by a mob henchman who explains to her "I'd like to just make this a quick kill, but you know the rules. After what your husband did, I gotta do this. If you don't struggle, it'll take less time." Then he begins taking his pants off. ...Wait, what the hell? Does Luc Besson think the mob has a rule where if someone rats on you, you are required to rape his wife? Not just allowed, but forced to? What kind of Code-of-Hammurabi, Old-Testament-ass law is this? You could possibly argue that he just planned to hit her with the belt, but that's not that much better. What is the point of including that? What the hell is the point of any of this?

Being Flynn and Silver Linings Playbook both proved that De Niro is still capable of putting in a great performance, so I don't understand why he isn't more choosy with his roles. He's earned the right to say "No" to things by now, so I can only assume he genuinely likes being made into a talking animal in a Dreamworks film. No, I'm not talking about that time he literally was a talking animal in a Dreamworks film; I mean that most of his performances for the past decade have revolved around this concept of "Hey, look, I'm Robert De Niro. I'm well-known for having "X" characteristic, but now I'm behaving in a way that is contradictory to what you previously believed based on that characteristic. Isn't that funny? It's funny. I'm funny."

It's not funny, Robert! We pretty much expect it of you by now! Five minutes into this movie, you actually look into a camera and shrug. Stop doing this to me, Robert! If you don't care, just stop! Just let me go, Robert. ...Just let me go.

MINORITY REPORT: Did it ever occur to you that Robert De Niro doesn't want the grandchildren I assume he has to ever have to work a day in their lives? Think of little Timmy and Kenny De Niro, with their missing teeth, big soulful eyes and ruffled blonde hair, looking up expectantly at their barely cognisant granddad. How can he refuse them? You're taking yachts out of babies' hands, Vargo! - Ian "Professor Clumsy" Maddison