EXPECTATIONS: Lately, some of my non-film-critic friends have been curious about my excitement for War Horse. When they ask what it's about, I tell them "It's about a horse who goes into war, and then has to make his way back home!" Then they raise an eyebrow and ask why I'm so excited to watch an equestrian version of Homeward Bound. At this, I can only shrug and answer "...Spielberg?" To which they nod understandingly and declare "Spielberg."

REALITY: It's debatable whether Steven Spielberg is the greatest director ever. Everyone will put him top five, sure, but many will argue for Hitchcock, Kurasawa, John Ford, Scorsese, or, in the case of massive man-babies, Christopher Nolan. That's all well and good, but there's a point to be made here: None of them (maybe Ford) have ever gotten genuine empathy and actual emotional expressions from the face of a horse. 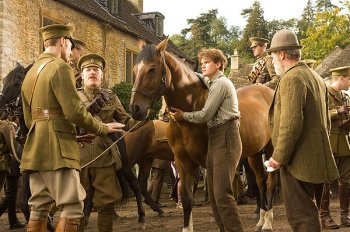 The iconic scene in which wars and horses collide.Yes, War Horse is literally that. In the months preceding World War I, Ted Narracott (Peter Mullan), a farmer and Boer War veteran, buys the neighbor's horse at auction because he feels like it. Ted's son Albert (Jeremy Irvine) forms a special bond with the animal, whom he names Joey, and he uses it to temporarily save the family farm by teaching Joey to plow. One of this film's many accomplishments is that it manages to make plowing a field seem interesting and entertaining.

However, this moment does not last forever, and in order to fulfill Spielberg's requirement that all his films need to contain some form of Daddy Issues, Ted sells Joey to be used for the Cavalry in the British Army. From here, the story wanders all over Europe and throughout the war. Joey has many different owners, on both sides of the conflict; some treat him well, some don't. The fact is, Joey may be the titular character, but the human characters and their stories are equally important. Joey and his partner/friend Topthorn are humanized to the point where the horses are actors and characters at the same level as Tom Hiddleston and David Thewlis. It's a fascinating study in what is essentially a war epic-ensemble film that revolves around one character. That character just happens to be a horse.

It's easy to be cynical about War Horse, because it's rather silly in concept. As someone on Twitter puts it, "War Horse is about a horse who witnesses the horrors of war and doesn't know what's going on because it is a friggin' horse." However, that's part of the charm of the movie. The audience really does feel that Joey understands everything perfectly, and it shows. There's actual emotion when Joey puts himself in danger to defend his fellow horse friend. That sounds cheesy, but trust me, it's not. Sappy, yes, but not cheesy. Your enjoyment of the film will depend entirely upon how much you enjoy Spielbergian Schmaltz (I say we make this the new "Capra Corn"). It's definitely present here, but not overly so. The world that Spielberg creates around Joey is so fascinating that the schmaltz works. Yes, War Horse is about a friggin horse, but the point of the movie, what makes it interesting is that it's a friggin' horse 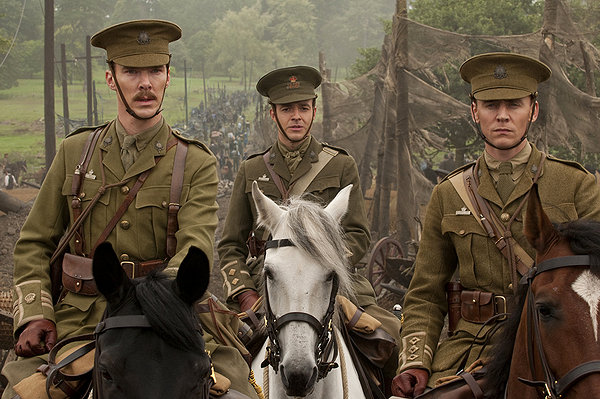 Men of war. Riding horses. Horses of war. War Horses, if you will.

Don't be fooled, though, this is definitely a Spielberg war film. Even with the PG-13 rating, the battle sequences and the depiction of No Man's Land are intense and gritty. Even with the sappiness embedded in the film, it's much closer to Saving Private Ryan than it is to Always. In fact, what's remarkable about War Horse is that it's just as much about the War as it is the Horse. Soldiers on both sides are depicted with varying levels of nobility. Civilians experience the impact of war. Deserters are recognized but not condemned, mainly because Joey is himself a deserter. Joey's story depends entirely on us recognizing that the horse is a soldier: This is a soldier's story. He's taken from the farm he grew up, deserts after battle, and becomes a POW used for labor. He forms bonds with his brothers-in-hooves, and he winds up in between the two trenches, being rescued and cared for by army doctors. It's one of those odd parts of movies that's handled so well, you don't realize while you're in the film, but it resonates with you afterward.

I've been making jokes about how literal War Horse's title is (though it's not as literal as We Bought A Zoo), but that's the point, really. It's a war movie that has a horse. It has all the details we expect from both of those ideas, but they're strung together quite well. A scene in the middle of the film between Joey and two opposing soldiers is one of the best moments in cinema this year. Between the music, the brilliant cinematography, and the father-son issues, this is everything we expect from "Steven Speilberg's movie about War and Horses." That is to say, it's pretty great.

MINORITY REPORT: The horse in this film reminds me of my old horse, Blinky. He had three eyes and barbed teeth, but his singing voice could make even the stiffest zombie weep. Poor little guy... - Donovan Laird, Wasteland Chronicle