The Girl with the Dragon Tattoo

EXPECTATIONS: The trailer for The Girl with the Dragon Tattoo ranks among my favorites of 2011, a wordless montage of images set to a brilliant cover of "Immigrant Song," with the final 30 seconds proclaiming it THE FEEL BAD MOVIE OF CHRISTMAS. Hyphen neglect aside, the trailer itself promises an improvement over the Swedish hit, a leaner, more ferocious take on a recent phenomenon that's manifested itself in three incarnations since 2008. Given David Fincher's prior successes within the thriller genre (Zodiac is a textbook example of how to fashion a true-crime thriller), an adaptation by Oscar-winning screenwriter Steven Zaillian, and a release date that is generally reserved for prestige films, I'm hoping for the best possible version of a story with which I'm all too familiar after three viewings of its Swedish predecessor.

REALITY: The Girl with the Dragon Tattoo is an odd blend of ecstatic highs and gnawing lows. At times, it's so good I almost feel guilty for noticing its flaws, which are generally minor but numerous and greater than their sum. 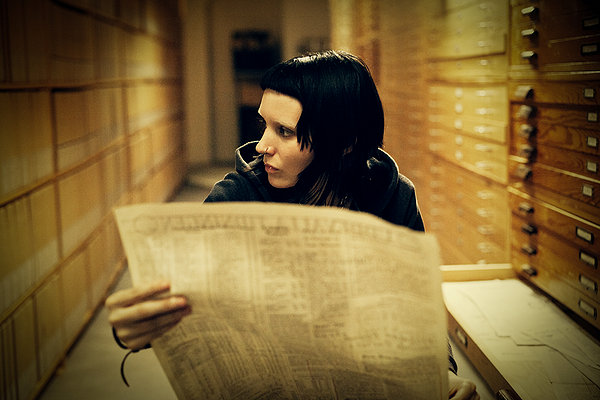 The Girl with the Dragon Tattoo follows Mikael Blomkvist (Daniel Craig), a journalist whose career is in tatters after a libel suit, as he ventures north into the colder reaches of Sweden to solve a mystery with the help of antisocial, chain-smoking hacker Lisbeth Salander (Rooney Mara). Considering the great lengths to which publicists went to emphasize that this American version is a re-adaptation of Stieg Larsson's novel rather than a remake of the previous film, those familiar with the earlier film won't find any surprises here as the filmmakers reduce the difference between re-adaptation and remake to a trivial one. Despite only running five minutes longer than the earlier film, Zaillian does an incredible job of giving the story room to breathe; in that five minutes, the filmmakers have somehow crammed an impressive amount of detail, including the reinsertion of a previously excised character who resolves a minor narrative flaw present in the 2009 film.

Unfortunately, the pacing's all fucked up. Sandwiched between the slow-building first act, which spends far too much time just getting characters to where they need to be, and the anticlimactic epilogue(s), for which Fincher appropriates elements of a light-hearted heist film, is a genuinely good movie that's gripping and literate. Unfortunately, it's hard to politely disregard 60 minutes of scenes -- even in a film as long as this one (158 minutes). 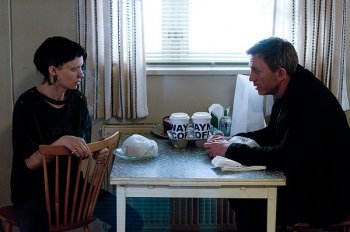 Don't be fooled, scenes like this take up less than ninety percent of the entire film.That's The Girl with the Dragon Tattoo in a nutshell; an hour of moderate tedium bookending 90 minutes of brilliance, and the latter outweighs the former, so you should probably see this movie if you're a fan of David Fincher, thrillers, Nine Inch Nails, books, boobs or snow. That being written, if you're unfamiliar with The Girl with the Dragon Tattoo, stop reading now. Any further discussion of the film's strengths and flaws requires spoilers.

Rule of thumb: If I could completely describe the plot of a popcorn thriller in a paragraph, it has no business being longer than two hours, especially when it dotes on plot elements that could easily be discarded. Film adaptations and their source novels are built for two different mediums, and I get itchy when a film is so wed to its source it neglects the demands of a filmgoing audience.

Brace yourself: In my fantasy adaptation of The Girl with the Dragon Tattoo, the libel subplot is excised. Ya hear that? EXCISED. I don't care how integral you think it is to the plot; you're wrong. It's a means to getting Mikael out to the goddamned island when he really doesn't need that much motivation to go to the goddamned island (journalists are nothing if not naturally curious) ... and it's goddamned TEDIOUS. Whether it's crucial to the films that will follow I can't say, having neither read the books nor seen the Swedish sequels, but I require any film that doesn't already have its sequels in the can to stand on its own two legs. The Girl with the Dragon Tattoo stands on three of them, and Zaillian neglects a golden opportunity to saw off that deformed, mutant leg in pursuit of a tighter thriller to actually expand on this ill-advised subplot. 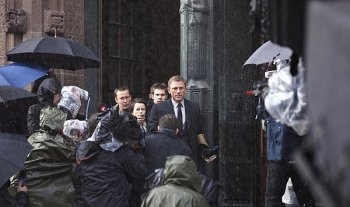 Mr. Craig, Mr. Craig! Tell us about the new James Bond film!Pacing issues aside, the libel suit presents a strange narrative counterbalance to the intensely personal, messy mystery at the film's core. Status-quo manifestations of corporate corruption seem pretty minimal against a story dealing in fratricide, incest, anti-Semitism, mutilation and serial murder, so Wennerström loses most of his villainy when contrasted with the vile Vanger clan. Furthermore, Lisbeth's appeal is her ability, even with the deck stacked against her, to make the most of finite resources; her rapid tranformation to Carmen Sandiego so she can restore Mikael's good name and wrap up the libel business violates her character and the qualities we admire in her.

Then again, just about everyone involved in the making of The Girl with the Dragon Tattoo loses sight of Lisbeth's traits about halfway in. In Americanizing the novel, Zaillian goos things up with a great big helping of sentimentality; rather than using Mikael for sex and internalizing any romantic feelings she might have for him, Lisbeth -- the hardened punk who set her own daddy on fire and rapes a dude back to even the score -- develops an acknowledged affection. They have two or three charming love scenes, the last of which resembles the midpoint of any PG-13 Hollywood romcom starring Jennifer Lopez. Not only is this a betrayal of character, but also the filmmakers retroactively cast light on flaws in the film's previous incarnation: Is it reasonable for the audience to assume that a victim of oral and anal rape would be DTF before the end of the month? I doubt it, and by kicking up the savagery of the rape itself and the emotions shared by Mikael and Lisbeth, Fincher & Co. stretch the suspension of disbelief near to its breaking point while displaying a shocking insensitivity towards victims of sexual violence.

All that said, how can I recommend The Girl with the Dragon Tattoo? Because, for that aforementioned stretch of time, it's simply a damn good film. It's gorgeously photographed, literate in ways that few mysteries dare nowadays, possessed of one wholly menacing villain, obsessed with its snow-thrashed Swedish landscapes and -- regardless of whether publicists want it compared to its Swedish predecessor -- a modest improvement, warts and all. Considering that most of the flaws I've touched on are rooted in an imperfect book, The Girl with the Dragon Tattoo is the best possible faithful adaptation of Larsson's novel; a better one still would have the balls to diverge from its source, wildly.

MINORITY REPORT: You know who else had a dragon tattoo? Francis Dollarhyde, aka: The Red Dragon, aka: The Tooth Fairy. We all know how his story ends and I can only assume this is some pseudo-sequel about his daughter. You inherit tattoos, right? - Ian "Professor Clumsy" Maddison