We Bought a Zoo

EXPECTATIONS: This film's title has become something of a joke around the Current Releases office. It's the perfect icebreaker for those awkward lulls in a conversation. Just bust out a spirited "We bought a zoo!" and watch the delighted confusion unfold! It's also the rare title that manages to explain the entire film in just a few short words. Most wouldn't dare put We Bought a Zoo in the same company as Snakes on a Plane, but then that's the kind of review work you good people have come to expect from our little operation. In all seriousness, though, We Bought a Zoo looks every bit as falsely heartwarming as Snakes was soul-crushing. God bless us, every one.

REALITY: Cameron Crowe is a filmmaker who made his name tugging at our collective heartstrings; the tender warming of hearts at the plight of misfits is this man's bread and butter. So the fact that this is his first feature in six years might be enough to explain why We Bought a Zoo feels utterly contrived at every turn, taking what was already a stirring true story and breaking it down to scraps for Crowe's latest feel-good machine.

Benjamin Mee (Matt Damon) is at a crossroad. His wife has been dead for six months, his son Dylan (Colin Ford) has been expelled from school, and he's just quit his newspaper job because the editor wants to move him to an online column. He quickly decides to purchase a farmhouse way outside town when his realtor explains that it is actually a zoo in desperate need of repair. With the help of the resident zookeepers (among them Scarlett Johansson and Elle Fanning), the Mees learn some very important lessons about letting go, moving on, believing in yourself, and not yelling at wild animals. For more information on upbeat-movie clichés, please turn to chapter six: "The Science of Flashbacks." 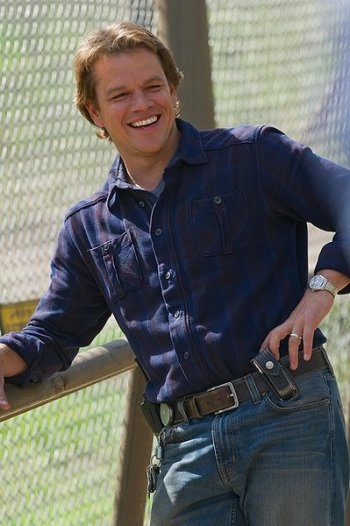 ha! It's hilarious how we bought a zoo.We Bought a Zoo's most glaring problem is that it's never quite sure what it wants to be. It holds back on its more depressing undertones in favor of some lighthearted comedy and the drama inherent in suddenly deciding to buy a zoo. When Crowe has spun his wheels long enough with scenes of zoo maintenance and finance and all that fun stuff, he switches gears in an instant to the maudlin story of the Mee family trying their best to move on from a devastating loss. This leads into Benjamin reminiscing about his wife in oddly emotionless scenes during which Matt Damon stares at poorly taken photographs. This leads directly -- and jarringly -- into the next mildly amusing vignette of people messing with some animals.

There's a disjointed flow to the story that ends up damaging how well the film's emotions resonate. The relatively intense drama of Benjamin and Dylan at each other's throats doesn't mix very well with the lighthearted romp of Benjamin trying to run a zoo. As mentioned earlier, this is based on a true story, so I won't begrudge the film its general trajectory; the path the film takes to get there is where things fly off the rails.

One of the driving conflicts of the whole film is that between Benjamin and his son. Dylan is still having issues following the loss of his mother, and he lashes out by stealing money, drawing disturbingly articulate scenes of violence, and generally yelling at his dad that he hates living in a zoo. Every time Benjamin tries to respond, Dylan lashes out even harder and becomes more of a petulant little dick. There's obviously drama to be wrung out of this relationship, but after a while it becomes obvious that Crowe wants us to tune this stuff out, because it hits the same notes over and over again. The conflict between father and son is only resolved because it's the only way to wrap up the zoo story (and because the film can't exactly get rid of Dylan).

Crowe's film is so peppered with grunge-rock staples and vague Generation X-type angst (not surprising) that I can't help but position this film as a sort of anti-Young Adult. You've got a single writer with lots of emotional baggage who decides to head for the sticks and do something drastic, then the writer meets some colorful characters along the way that teach him/her the value of other points of view, and suddenly comes the tipping point where everything might come tumbling down... But then everything turns out great for everyone! Try to imagine all of the themes at work in Young Adult -- the angst of getting older, the fear of letting go, the realities of being a self-absorbed waste of life -- now ask yourself "How can I turn this into a heartwarming tale for the whole family?" Congratulations, you've just written We Bought a Zoo! 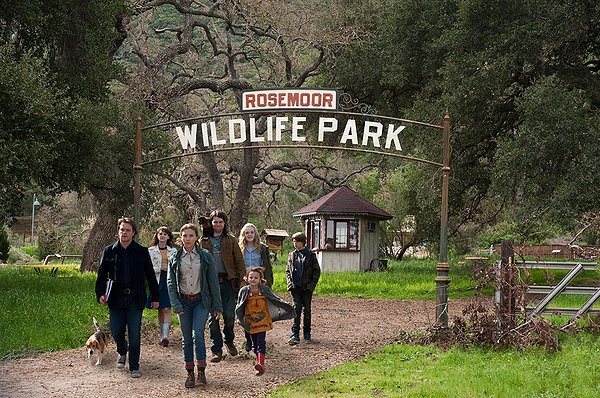 Here's the zoo we bought. Did I mention we bought a zoo?

The best description for a film like this is 'agreeable nonsense.' We Bought a Zoo has barely a clue when it comes to imparting some wisdom about the human condition, but it knows it wants us to leave the theater with a smile on our face and a warm feeling in the cockles of our hearts, and winds up doing so in spite of itself. The story doesn't earn some of the victories it grants its characters, but by cleverly disguising the holes and cracks with Sigur Ros tunes and cute exotic animals, I doubt most people will ever even notice.

MINORITY REPORT: Hey, Ian, I wanted you to look over these changes I made to the 2012 Current Releases budget. See, I figure if Matt Damon can buy a Zoo, then we can buy an old folks' home. It'd be like the heartwarming tale of a group of geriatrics who learn about the power of love and friendship while making VARGO RULES T-shirts. Ian? Ian? ...Hello? - Martin R. "Vargo" Schneider