EXPECTATIONS: This film looks like a remake of Skyline, and if there are two odd things we like around here, they'd be remakes and Skyline. It's actually amazing how much the two films have in common. Both are about aliens attacking Earth with pretty light shows, both are fairly reviled by critics and audiences, and both were directed by people who are usually on the art-direction side of filmmaking. This means that on some metaphoric level, The Darkest Hour is probably about visual effects and their impact on Russian films or something. I don't know, I'll figure it out. All I know is that the more controversial an opinion is, the more readers we get, and maybe it's my turn to have a highly controversial opinion, dammit!

REALITY: Few films are as daring and creative as The Darkest Hour, a provocative look at American-Russian relations through the use of the descending aliens to represent the influence of western society tearing apart the desolate land of Communist Moscow... Okay, I can't do this. I desperately wanted there to be something interesting happening under the surface of this movie, but the problem is that nothing is happening here, on any layer. 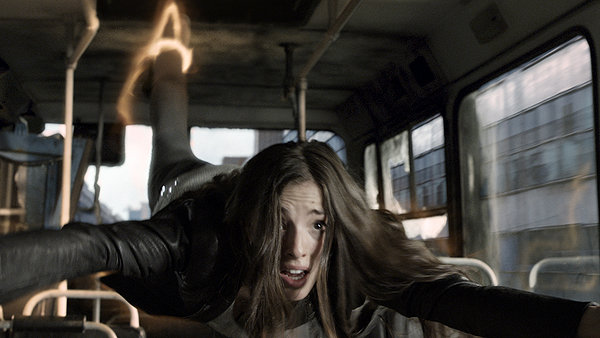 Help, yellow lightning has somehow got me.

The Darkest Hour starts off with software designers Sean (Emile Hirsch) and Ben (Max Minghella) arriving in Moscow to sell their product to a group of investors, only to discover that their idea has been usurped by the Sleazy Guy In Every Horror Movie (Joel Kinnaman). Distraught, they find themselves at a nightclub with Natalie and Anne (Olivia Thirlby and Rachael Taylor), two attractive women who also happen to be not Russian. For a film that makes its Russian setting a selling point, you sure don't see any Russian people for the first forty minutes.

When glowing golden fairy-jellyfish descend from the sky and start disintegrating people, these four, along with Sleazy Guy, survive the attack by hiding in a kitchen for several days, and then it becomes the horror movie cycle. Pick an arbitrary point. Go there. Run from creature. Pick other arbitrary point. Character death every twenty minutes or so. This is a zombie movie minus the zombies. Hell, this is an alien movie minus the aliens. See, the aliens have these cloaking shields that only give them away when they're around electricity. Why? Because it's a lot cheaper to film a light bulb than to show an alien creature. Now, the bit about electricity? Well, that's dangerously wandering close to "interesting" territory. We better tack on some ridiculous psuedo-science that the characters all seem to know instantly for no reason, just in case someone starts to think we're making a point or something.

When I said I thought this would be a rehash of Skyline, I didn't realize that every piece of it was a rehash of something better. The plot and the aliens themselves are a rehash of Skyline. The sweeping, empty, mostly green-screen set pieces are a rehash of I Am Legend. Emile Hirsch is a rehash of Leonardo DiCaprio. The "invisible alien" thing worked in Predator, because when we actually saw the monster, it was at least interesting to look at. (This may have been because its face was a screaming toxic vagina, but still.) If you're not going to show us the monster in your monster movie until the last act, you had better have one hell of a reveal. Instead we get a black creature so nondescript and bland that it looks like a rejected design for a "dark" Pokemon. This film contains everything you've seen in similar survival-horror movies, right down to lines that have been delivered better in romantic comedies of all places. (For some reason, "Why can't I use the phone on the plane?" has become this generation's "what's the deal with airline food?") 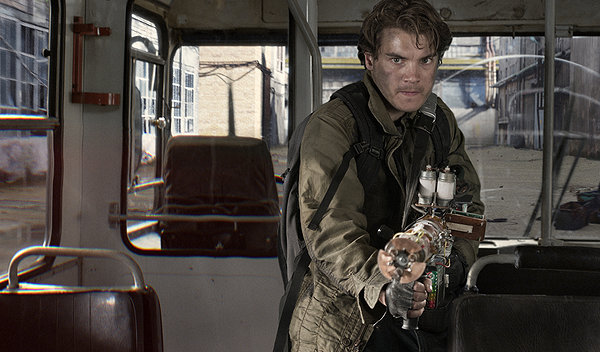 Oh, I'm sorry. You appear to have just wandered onto the set of the new Ghostbusters movie.

Films are a team effort; bad films usually even more so. However in this case I have no problem pointing a finger. If we're going to assign blame, it can go to art-director-turned-rookie-filmmaker Chris Gorak. From the very beginning, it's clear Gorak has no idea what he's doing. Any scene transition, any passing of time, is welcomed with a fade to black, as if Gorak just discovered that button on Windows Movie Maker. It works at first, signifying the passage of days as the group hides in the kitchen. Following that, however, it begins to lose all meaning. Characters are at the bottom of the stairs, FADE TO BLACK, they are at the top of the stairs. It's like the false endings in Lord of the Rings, but throughout the whole movie. This is nitpicky, sure, but it messes with the pacing of an already directionless film.

Within an hour, we've gotten our characters to a climax, but there's still film left, so we add more ridiculous complications. Two characters fall off a boat at the same time. One of them resurfaces thirty feet downriver, the other one turns up three miles away. Inland. There is literally no explanation for this other than "the script said so," which seems to be the justification for everything. How can Sean, previously shown to be an idiot slacker, suddenly become the world's foremost expert on alien biology? The script says so. Why are we supposed to have any emotional response to the death of characters we don't care about? Because someone in the script is having one. And speaking of the script, I wasn't completely lying earlier when I said the movie was trying to say something about American-Russian relations. It is; it's just not sure what. It also might be trying to comment on society's dependency on technology. It also may be about special effects. Apparently someone told Chris Gorak halfway through filming that most of the time movies are actually about something. He tried, God bless him, but the movie's not even interesting at face value, so it's not worth digging for subtext.

Releasing a film like The Darkest Hour over Christmas weekend is a huge risk, and I can't imagine why Summit Entertainment is risking their hard-earned Twilight cash on what is essentially a SyFy original movie. Apart from maybe Emile Hirsch and producer Timur Bekmambetov, there are no big names attached to this film, and nothing to justify releasing it outside the first quarter of the year, where movies go to die. No, you know what? Scratch Bekmambetov. I need to remember that "Nerds know his name" is not the same as "is actually famous." Anyway, the film commits the same sin that so many alien movies this year have: It's just incredibly bland. Hell, the aliens in this have the same boring motivation as the ones in Cowboys and Aliens, but this film at least has the decency to explain it away with a throwaway line. So, not only do I not get my controversial opinion, but I also had to sit through The Darkest Hour. This was the worst Christmas ever.

MINORITY REPORT: The only thing this has in common with Skyline, then, is that everyone is going to hate it? I really wish I could convince the world to give that another go; it's much more worthwhile than this. - Ian "Professor Clumsy" Maddison