EXPECTATIONS: Most of the buzz surrounding The Hunt focuses on lead actor Mads Mikkelsen. With Mikkelsen madness sweeping the States right now thanks to his hit television show Hannibal, it only makes sense that this acclaimed Danish drama in which he stars should get a release there. Whether the American public will take this tale of a nursery teacher accused of paedophilia into their hearts remains to be seen.

REALITY: The Hunt is a seriously good kitchen-sink drama about alienation and public witch hunts. We live in an era where we're discovering that everyone who worked for the BBC in the '70s is apparently part of some Red Riding-style paedophile cover-up conspiracy ring, with a leering Jimmy Saville at the head of it all. New allegations of sexual abuse arise on a fairly regular basis, and we all react as a public. We are outraged immediately and there seems no room left for rational thought. In this light, it is very easy to imagine the situation presented in The Hunt becoming a startlingly mundane reality. 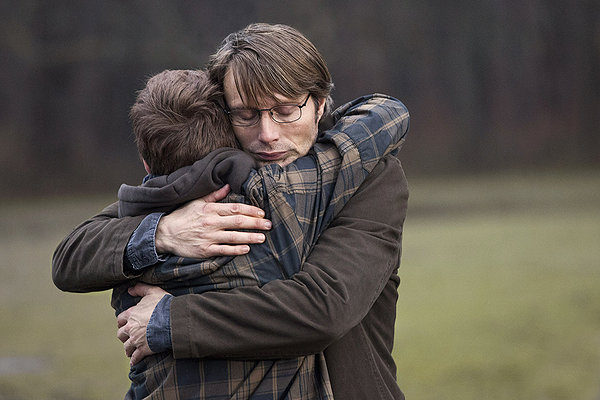 Look! See? He totally is!


Divorced nursery teacher Lucas (Mikkelsen) is a trusted member of his small community, in good standing with the local hunting club and even building a romantic relationship with colleague and Swedish immigrant Nadja (Alexandra Rapaport). Things are going well for him until he starts to notice that his best friend Theo (Thomas Bo Larsen) is a bit of a disinterested father, which leads Theo's daughter to latch onto Lucas. After he scolds her for her overbearing attentions, she makes up lies about Lucas showing her his penis and making her do things and gets the other children to follow suit. In spite of an official investigation turning up nothing and Lucas getting acquitted, the townspeople continue to demonise and ostracise the man, pushing him to the absolute limit.

What makes the film frightening is just how identifiably human every character is. Lucas is the kind of quiet, lonely man you'd almost expect to be a paedophile, and the responses of the townspeople to the allegations are, if not rational, definitely understandable given their assumptions. If Lucas were guilty, and in their eyes he certainly is, their actions could almost be considered heroic.

Mikkelsen's performance is every bit as good as you might have heard. He instills Lucas with a great sense of tragedy while never giving much away. With his appearance as a somewhat reclusive outsider, even before the allegations are leveled against him, the supposedly impartial observers in the cinema audience are never entirely sure. There are scenes wherein we look at Lucas and think to ourselves "maybe he is one of those..."


This ambiguity is important because it tests our prejudices and our responses to those prejudices. We hear the findings of the investigations, but the film never gives us definitive alibis or answers. It asks only that we trust, the same thing Lucas asks of his friends and neighbours, and something that they are apparently incapable of. "There's no smoke without fire," they might say. But, if we do purport to live in a just society, should we not prescribe to the societal mantra of "innocent until proven guilty?" 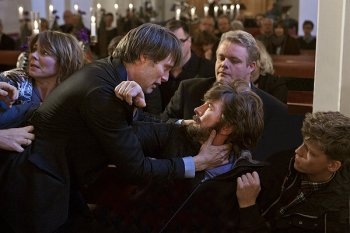 He's the devil! Tearing up the church! An evil man!By telling this story through the eyes of an (we assume) innocent man, The Hunt asks its most interesting question: Even if he were guilty, would the extreme reaction of the community be in any way acceptable? The film's climactic moments suggest that Lucas has been ultimately robbed of his humanity because of the attitudes of the people around him. Throwing bricks through the window of an actual sex offender hardly benefits anyone, really. Does robbing a man of his humanity help the rest of us? Does this violent overreaction for the sake of protecting our children really protect our children after the fact?

In the third act, Lucas' teenage son comes to live with him full time, and he has to deal with everything hanging over them. With his introduction to this small community shrouded in his father's shadow, the young man is given some tough decisions that I don't really want to spoil. In the end, we have to question just where he stands on the matter. Would he side against his father, or would he give him the trust he ultimately needs? This is not a choice he wants to make, either, but one that is thrust upon him.

The Hunt has a lot to say on the topic at hand, but in the end it makes a simple statement: In the absence of all the facts, we can never really know. The truth is somewhere beyond the facts, and it often requires faith. If you truly believe you know someone and rumours spread about them, you'd think you could look them in the eyes and know. The Hunt suggests that no, you would not know, and even by looking you have judged them already.

MINORITY REPORT: This is the kind of monster those jaegers were built to destroy. Grab the pitchforks, villagers! - Sean "Keanu Grieves" Hanson