EXPECTATIONS: I can't understand why one of these things exists, let alone two. I wonder how many people are really that nostalgic for late-'80s SNL, and why those people have yet to realize that the world where Adam Sandler and David Spade were funny is no longer the world we live in. Perhaps it never was. However, the first Grown Ups made almost $300 million. If we figure that the average price of a movie ticket is about $12, then I am forced to conclude that this movie exists solely for the 25 million people in the world who are complete idiots.

REALITY: So often, people who analyze films are told that we'd be happier if we would just "turn off your brain, man." I don't know how to do that. My brain does many important things, and I think I want it to stay on for as long as possible. See, I used the word "think" in that sentence. That means it's working.


However, during Grown Ups 2, I experienced this "turn off your brain" phenomenon against my will. My brain was forcibly turned off, absolutely refusing to process the stupidity of what was happening before me. My ocular nerves attempted to transmit information, and my neural waves responded, "Nope, nuh-uh. We don't want any." Being rendered essentially brain dead, I actually laughed at times, but it was the confused, desperate laugh of a man who falls asleep on a train and wakes up realizing he has no idea where he is or what has happened. 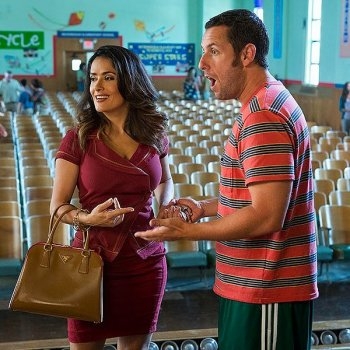 My need for publicity shots depicting over-the-top reactions to outrageous offscreen events cannot be sated.After the non-events of Grown Ups, ultra-rich, cool, successful, beloved guy-with-a-smoking-hot wife Lenny Feder (Adam Sandler, in another masturbatory fantasy) moves back to his small New England town to raise his kids. All his buddies are there, too, for some reason: Eric (Kevin James) is worried about his idiot son and spends too much time with his mother; Kurt (Chris Rock) is working for the cable company and skipping his only appointment; Higgins (David Spade) is forced to spend the summer with the delinquent son he never knew he had, making him the only character with anything resembling a story. On the first day of summer, everyone spends the day mostly goofing off. Kurt convinces Lenny to have a party at his house, and a bunch of frat boys led by Taylor Lautner fight the old dudes and their families over ... well, I want to write "over control of a swimming hole," but that's never really established, so it's basically for no reason. All the while, they enjoy refreshing Pepsi-Cola Brand Beverages purchased at unbeatable K-Mart prices.

Look guys, you're a bunch of professional comedians plus Kevin James. When Taylor friggin' Lautner is the funniest thing in your movie, you're doing something wrong. (Side note: Lautner always seemed unintentionally hilarious to me. Like he was the one guy in the Twilight franchise that wasn't fully in on the joke, and now he's trying to pull a Channing Tatum and going about it in the worst way possible.)


You know how sometimes high-school girls in teen movies will surround themselves with less attractive friends, reasoning that this will make them look better by comparison? I think that's why Adam Sandler has kept all of his horrible friends employed for so long. And it doesn't even work when you've got the infinitely more talented and still-kinda-respected Chris Rock in the mix. With Rob Schneider gone, he added the always-bad Nick Swardson, making me do something I thought I never would: wish Rob Schneider were here.

Sandler's not even trying to hide the fact that this is a movie made so he can party with his buddies and make someone else pay for it. The last act of the movie consists solely of the elaborate party Grown Ups ticket-buyers funded. Hell, the J. Geils Band even shows up for no other reason than they realize Adam Sandler is the only man on earth who still cares about the J. Geils Band. Sandler party invites also went out to sportscasters, wrestlers and sports stars. We didn't even bother changing the names this time. Peter Dante plays Officer Dante, Milo Ventimiglia plays Frat Boy Milo. (Editor's note: Shaquille O'Neal does get the fairly fucking awesome character name "Officer Fluzoo.")

There's a difference between being self-aware and being obnoxious. Five minutes into the film, Sandler looks directly at the camera and says "there's no way I should be married to a woman this beautiful. It's like something out of a Hollywood movie." That's borderline. When Salma Hayek sinks a shot while playing quarters, she says "it's as easy as making a free throw," and the camera cuts right to Shaq, looking vaguely insulted. This is obnoxious, because it doesn't even make sense. Shaq is the only guy in this movie NOT playing himself. It's a good gag that ruins itself by being TOO self-aware. 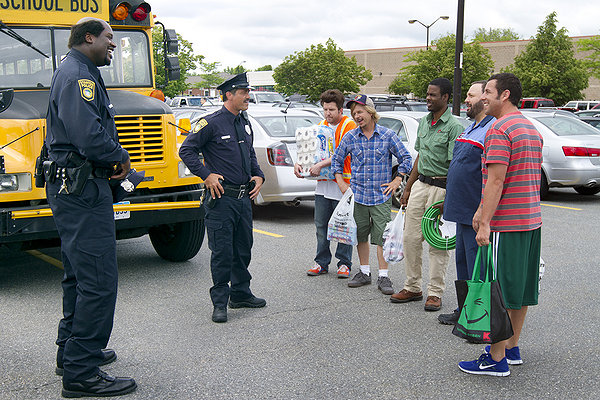 It's great that you guys are all enjoying yourselves, but don't you have an audience to entertain?


The irony of Grown Ups becoming a franchise is that it's entirely based upon men acting like teenage boys, a convention I despise. Hey, did you know that women have breasts? Grown Ups doesn't think you do, so it has to remind you a bunch of times. Women have breasts, and men will do anything, literally anything, to see them. Jon Lovitz poses as an aerobics instructor so he can get a group of women to spank themselves in front of him. The joke is supposed to be that Lovitz is a lecherous pervert, but that doesn't work when the rest of the male characters basically act the exact same way. Men are hormone-crazed sex beasts, after all, completely incapable of any sort of dignity.


When the film brings up man-bodies, it's always as a gross icky joke. I'm not saying I'm expecting progressive gender politics from Happy Madison productions, I'm saying it feels like we're all too old to find this crap funny. Men and women have different bodies, and that's not a big deal. I don't think we're getting anywhere as a culture until people learn this. The fact is, this is a movie where a woman having muscles is treated as a giant joke, and where Maria Bello has to scream "I am a person!" into a group of frat boys.

Let's compare Grown Ups 2 to the similarly-themed-but-actually-good American Reunion. American Reunion allows its characters to grow and accept their responsibilities while reassuring them that they are no less manly or fun for it. The Grown Ups series is dedicated to saying that even though you are grown and have children, you can still act like a teenage douchebag and it is awesome and everyone will love you for it.


There are a handful of funny gags in Grown Ups 2, like dressing Kevin James as Meat Loaf, but I'm tired of watching Adam Sandler's self-esteem-boosters that he makes in lieu of getting therapy. It's not flat-out offensive and disgusting like That's My Boy, but it's still just another excuse for this man to refuse to grow as an actor, or as an entertainer, or as a human being. And we should not be encouraging it.

MINORITY REPORTS: As a former movie theater usher, I can tell you that helping you turn your brain back on is not part of an usher's job description. So good luck with that! - Joseph "Jay Dub" Wade

As a connoisseur of anti-humor, I can tell you that turning your brain off isn't required to enjoy That's My Boy, but turning off your conscience is. What I'm saying is that only serial killers, or people with latent murderous tendencies, can enjoy recent Adam Sandler films. They don't even have to be morons. They just have to be willing to wear a fake cast, toss random women in the backs of their vans and fasten skin diamonds to make a woman suit. - Sean "Keanu Grieves" Hanson