EXPECTATIONS: It's time to dip back into the well of indie cinema, where expectations run low and surprises lurk around every corner. Based on an 1893 novel by Harold Frederic (that Wikipedia defines as having "no evidence of notability") and directed by Ronald F. Maxwell (Gettysburg, Gods and Generals), Copperhead promises all of the Civil War drama I can stand, while being mercifully shorter than either of Maxwell's previous epics.

REALITY: When an indie film turns out to be great, we have no problem singing its praises from every mountain top and clogging our social-media pages with links in the hopes that someone will see it. When an indie film turns out to be bad, in this case abysmally so, it's a struggle to even discuss it, because who cares about a bad movie nobody's ever heard of? That is the case with Copperhead, a Civil War-era "war at home" drama so sluggish that it makes Lincoln look like a Michael Bay film. 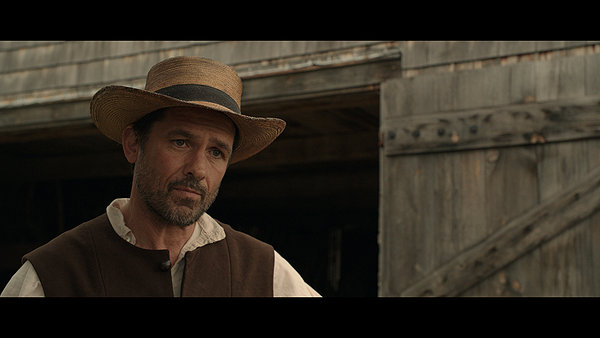 Nice hat, dickhead. What, are you in some kind of low-budget period drama or something?


The year is 1862, and the American Civil War is in full swing. In upstate New York, dairy farmer Abner Beech (The Rocketeer himself, Billy Campbell) opposes the war, calling Lincoln's decisions unconstitutional. His opinion gets him labeled a 'copperhead' and makes his family social pariahs, leading to an especially heated feud with religious nut Jee Hagadorn (Angus Macfadyen), whose daughter Esther (Lucy Boynton) is smitten with Abner's son Jeff (Casey Thomas Brown). When Jeff decides to join the Union army with the rest of the boys in town, Abner quietly disowns him.

Jeff joining the army is about as close as this film gets to propelling the plot forward. His decision leads to an excruciatingly boring second act in which characters spout scripture and politics at one another in the name of generating conflict. In place of meticulously choreographed battle sequences and clearly defined actions and choices, things just sort of happen. A tragic case of arson plays out as one long mistake rather than the defining moment of the story. The writing seems to be the product of someone copying passages from the novel verbatim instead of adapting the work to fit a two-hour film.

To the filmmakers' credit, the look and feel is spot-on. Shot in a Canadian historical village, Copperhead nails the look of a sleepy New England town insulated by the horrors of war. However, the photography, music and general tone make Copperhead feel more like a story about the hobbits Frodo left behind in the Shire. It's all very cozy and laid back, but at the same time it's unbearably precious. This film is too quaint even for the Hallmark Channel. 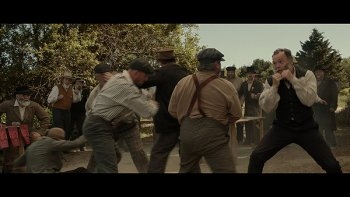 I don't think this is exactly how the Civil War played out. If it did, I'm not sure they'd bother re-enacting it at all.For being one of the film's protagonists (if it can even be said to have any), Billy Campbell's Abner is a black hole of charisma. The character is peaceful and stoic, but Campbell works so hard at stifling any emotion that he barely registers a presence in the film at all. On the opposite end of the spectrum is Angus Macfadyen, who plays Jee Hagadorn so furiously that he appears to be inducing migraines through sheer force of will. It's a shame that these two don't have more scenes together, because the ones they do share have a strange sort of tension to them, something this film desperately needs.

Copperhead fails to follow that age-old axiom of storytelling: "Show, don't tell." So much of the plot is conveyed thorough artless expository lines like "tell Pa I'm gonna go do this..." or "you tell that Hagadorn I said such-and-such..." Characters return home from the front lines telling horror stories about what they saw in battle and explaining how badly their wounds hurt, but we don't see any of it. The film tries to distance us from the actual war, but utterly fails to illustrate the brutality when it eventually comes marching home. One character returns without his right arm, but thanks to the movie magic of close-up shots and cleverly staged cast members, we only know he's missing an arm because he tells us so.

One character who exists solely to tell us things is Avery the blacksmith, played by Peter Fonda. This marks the second film in a month to feature Fonda basically doing nothing. Here, he reads a newspaper and can't be bothered to stand up for his one scene of dialogue, in which he talks about how slavery and the war to end it are both terrible things. I hope this becomes a trend. I look forward to seeing Peter Fonda show up in a few YouTube videos or, hell, even a Flash Tub to talk about the stock market or Vietnam before the year is out.

If you take nothing else from this review, let it be this: Copperhead is a remarkably effective cure-all for insomnia, sleep apnea, and having even a passing interest in American history or the works of Harold Frederic. This film is a two-hour snoozefest with no ability to generate relatable characters or any sort of interesting tension. It's the kind of film that makes me beg for obnoxious spectacle, because at least then I know my movie dollars aren't paying for a nap.