EXPECTATIONS: I have to admit, I'm kind of in the dark on this one. All I know is that it's some sort of indie dramedy starring Will Ferrell as a mopey 40-something jerkbag with life problems that he has to solve in order to get himself back on track. That seems like par for the course in the indie film world. If it's even half as good as Stranger Than Fiction, then I'll probably enjoy it. If it's anything like Ferrell's more popular output, I just might stab something, likely myself. Will Ferrell, you're on notice: If a stabbing takes place here tonight, it's your fault.

REALITY: It's always a gamble when comedy actors try to branch out into dramatic roles. For folks like Jim Carrey (The Majestic notwithstanding) and Bill Murray, it's worked relatively well. Will Ferrell tried out a role like that in Stranger Than Fiction, and surprisingly he turned in a very good performance. As it turns out, Will Ferrell alone is not enough to support a film. There also has to be a interesting story to tell, and that story has to eventually go somewhere. These are things that writer/director Dan Rush forgot about when he came up with Everything Must Go. 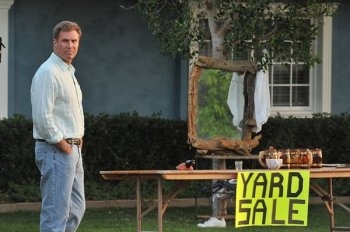 Hilarious, no?Everything Must Go stars Will Ferrell as Nick Halsey, a seemingly average 40-something who just lost his job as the sales VP of a paint company. At least, I think he is. The closest he ever comes to outright telling us what he sells is when he says "I sell people colors." Anyway, Nick arrives home to discover that his wife has left him, but not before throwing all his stuff out on the front lawn and then changing the locks. After presumably a week or so of living on his front lawn, Nick's AA sponsor and local detective (Michael Peña) grants him a 3-day license to hold a yard sale. In that time, Nick begins mentoring a fat kid with an inexplicable talent for selling things, and strikes up a friendship with a new neighbor, a pregnant art teacher (Rebecca Hall) who may or may not have as many problems as Nick.

That is the setup. That is the film. The first act sets up Nick's conflict, the second act continues the conflict, the third act tries to resolve the conflict. Rush's script gives us the minimum amount of effort in telling a story, but without any of the narrative hooks that make us want to see what happens next. In the beginning, we feel for Nick and his situation, but over the course of 100 minutes we learn that not only is he an alcoholic with some serious marital issues, but also he has a troubled relationship with his father. Nick becomes such a pathetic, detestable character that we don't want to see redeem himself, and yet the film soldiers onward anyway, hoping that if we just spend enough time with him Will Ferrell's performance will eventually win us back over. We come around on Nick only because we're told to. Laura Dern appears for one scene, wherein she explains to Nick why he's a good person, after which they hug and he walks away, now knowing that he's a good person. Hooray, everything is fine now. Except not, because he's still an alcoholic with daddy issues.

So much of the writing in this film is pedestrian. It's bush league, even for indie film standards. It's full of the kind of mistakes that first-year creative writing students make all the time. There's no rhyme or reason as to why Nick agrees to live on his front lawn. He does it because otherwise there's no story. We meet some of Nick's other neighbors, but only long enough to establish that they're cardboard cutouts meant to represent a certain theme. The first rule about writing anything creative is "Show, don't tell." Everything Must Go tells us absolutely everything. 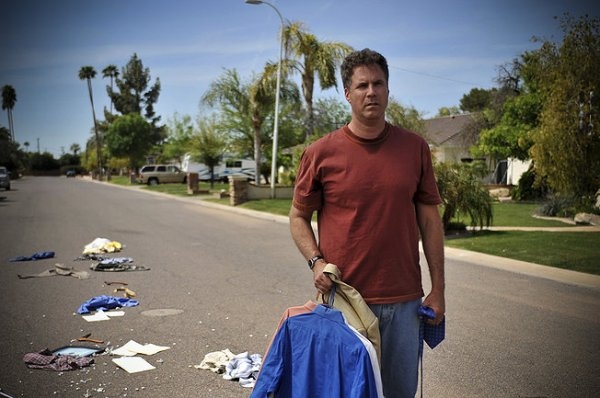 The film is based on a Raymond Carver story called "Why Don't You Dance." Calling that story the basis for what happens in Everything Must Go is kind of like saying Up is based on the time someone at Pixar accidentally let go of a balloon. It's tenuous at best, a complete lie at worst. Actually, this movie does kind of resemble Up, except the house doesn't go anywhere and nothing interesting happens.

This was the single most uncomfortable film screening I have ever attended. It was clear that everyone was expecting a Will Ferrell comedy. The ushers tried to warn everyone going in that that wasn't what they were getting, but nobody (myself included) heeded the warning. I wanted to laugh at how awkwardly constructed the film was on numerous occasions. I wanted to make fun of any number of plot holes or narrative inconsistencies in the film, but I couldn't. I wanted to joke about how even though Nick is constantly chugging Pabst Blue Ribbon and is painted as an alcoholic, he never actually appears to be drunk. So much of Everything Must Go is worthy of mocking and snide comments, but there's an air about the film that makes me feel bad for wanting to do so.

Don't misunderstand, Everything Must Go isn't a bad movie because I didn't think it was funny. I had an inkling that this wasn't going to be another movie where Will Ferrell runs around screaming in his underpants. Everything Must Go is a bad movie because it is poorly written. Will Ferrell is definitely the best thing about it, and he brings a certain subtlety to Nick's depression that most other actors would completely oversell. At the same time, however, I never really bought him as the alcoholic with daddy issues that we're told he is.

This weekend, a lot of critics have been flogging the new Pirates of the Caribbean movie for being a dull, creatively inert exercise in money-making. However, if this is the best that arthouse cinema can come up with in response, I'm sorry, but I'm gonna have to go with the film that has explosions and swordfights. At least then I can pretend I'm watching a film with a pulse.