EXPECTATIONS: Having first seen the trailers for Despicable Me almost exactly one year ago, and then, in recent weeks, once every twelve minutes, I can safely say that I've seen this film in its entirety probably five times at this point. Now, however, they're asking me to pay cash to see it a sixth time. And I'd be looking forward to it if it didn't look so thrown together. "Asshole adopts orphans" and "Super-villain steals the moon" are far too dissimilar for someone to have conceived them together on purpose. I expect to see the strong arm of a focus group or executive butcher sneaking around in this flick, duct-taping two different versions of Despicable Me into one Frankenstein's monster that makes absolutely no sense. That should be fun. 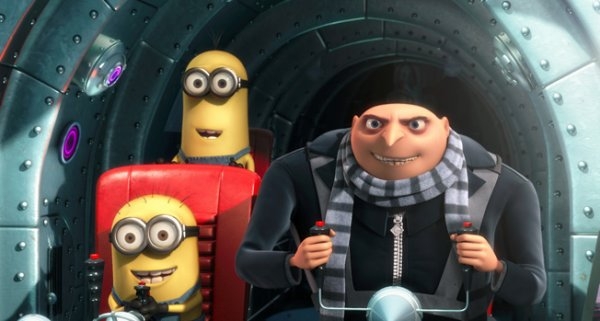 Let's just copy and paste the same facial expression onto every character.

REALITY: More than anything, I came away from Despicable Me feeling kinda bad for the movie. It's bad enough that the thing has to come out just a scant few weeks after Toy Story 3, but it also has to contend with How to Train Your Dragon from back in the spring, as well as Disney's upcoming Rapunzel movie and Dreamworks' own "Wacky super-villain as a main character" movie. It kinda sucks to be Despicable Me this year, which is a shame because it's actually not that bad.

Gru (Steve Carell) is just your typical underachieving super-villain living in suburbia with his mad scientist sidekick (Russell Brand) and a goofy band of little yellow Simpson farts otherwise known as Gru's minions. He's the kind of villain that you don't usually see in comic books because, despite having a badass secret lair and all kinds of crazy shit at his disposal, Gru's really not that good at his job. We don't actually see this, mind you. We're just told that Gru's a shitty villain after the Bank of Evil denies him a loan for his dastardly plan to steal the moon. The loan instead goes to a young upstart villain named Vector (Jason Segel), and a rivalry is born.

That sounds like a fairly solid premise for a cartoon, doesn't it? Dueling super-villains? Yeah, I thought so too. But then the movie introduces three orphan girls that Gru decides to adopt and use in his battle against Vector. This development practically hijacks the entire plot and steers it toward the whims of some Universal executive so that both boys and girls can enjoy the movie, because a cartoon about dueling super-villains apparently cannot stand on its own.

The parts that don't involve Gru slowly becoming the world's greatest dad are funny enough, drawing on old Wile E. Coyote cartoons as well as Spy-vs-Spy comics for wacky, destructive antics. The outlandish one-upmanship between Gru and Vector is great fun to watch, as is watching Gru just generally act like a royal douche to passersby on the street. It's obvious that they didn't have a full movie there, though. Enough material for a couple short cartoons, maybe, but the "Gru vs Vector" story ends up not working for a couple reasons.

First off, Vector is easily the worst character in the whole movie. Being an irritating nerd in a tracksuit isn't generally what you'd hang your antagonist-hat on, especially when you're up against an Eastern European weirdo with a crippling inferiority complex. Second, there's no motivation. Granted, most super-villains don't have much motivation to take over the world other than "I just wanna," but Vector doesn't even seem that interested in being villainous. He simply is. Let this be a lesson: When both your main character and your antagonist are super-villains, how do you make the antagonist unlikable to the audience? Just under-develop him! 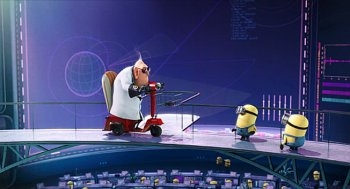 Scooter repairs are the mainstay for any evil scientist's laboratory.The same can't be said of the three orphans; Margot, Agnes and Edith, whose names must've been picked out of a retirement home directory. These kids are developed to death. Each one has her own little quirks and distinct personality and character tics, just in case we couldn't tell any of them apart. Now, my initial fears about them taking over the movie are basically true. Once they show up, we're pretty much stuck with them. Against my better critical instincts, though, I will admit there were moments where I got caught up in their attempts to melt Gru's icy, underachieving heart. More often than not, these scenes work, but every time a big "awwwww" moment comes along, I'm reminded that my desire for a movie about dueling super-villains is going largely unfulfilled. Instead, we get a story about parenthood and Spongebob rejects shouting "Poop!"

Which brings me to the minions. Now, animated movies aren't necessarily for kids, but they're almost always made with them in mind. That means there must be at least one character who is engineered to be insufferably adorable for marketing purposes. In How to Train Your Dragon it was Toothless, who looked like a cross between a turtle and a flying panther. In Toy Story 3 it was literally everybody. Despicable Me's version of this was to take yellow car-washing sponges, add overalls and some goggles, make them speak in gibberish or Swahili or something and then plaster them all the fuck over your TV until you give in and buy one of your own.

Oftentimes, these movies will operate under two guiding principles:

1) The least intelligible character is automatically the funniest.

2) The funniest character is afforded the least screen time so as not to drive mom and dad goddamn crazy when their kids inevitably mimic everything the character does.

Despicable Me takes rule #2 and drops it straight into the nearest garbage can. The minions are all over the fucking place in this movie, even bogarting the end credits to so some silly 3D effects (which are pointless in 2D, but then they're pointless either way if you ask me). Whole scenes are dedicated to the minions acting squishy and stupid, almost as though the studio had a third version of the movie starring nothing BUT minions, and loved it far too much to simply junk the whole thing. Roughly a dozen minions are actually given names, but it's pointless to call any of them anything but the tall/thin one, the regular-looking one or the short/fat one. It's the NES Ice Hockey game all over again, only this time the fights they get into are hilarious.

If the movie somehow manages to become a hit in between Vampire Dance Party 3 and Chris Nolan's I Don't Care If You Want Another Batman, I expect we'll be seeing a lot more minions in our future. Pixar did it with Larry the Cable Truck and Dreamworks spun the Madagascar penguins off into their own series, so the minions could be infecting out TVs for quite a long time. They could be hosting the 2016 Oscars or doing play-by-play commentary at the Super Bowl. Then again, that's a pretty big 'if'.'

MINORITY REPORT: Orphans exist solely for exploitation in court cases, so that the lawyers of people caught in freak fires can find a justifiable way to convince other people that I am to blame. They are a problem to be solved, and any form of media that seeks to romanticise them will be facing a boycott from the Smythe estate. -Montague "Legally Sane" Smythe

LOWTAX REPORT: Both of your opinions are wrong; this movie was great!