EXPECTATIONS: Aside from The Passion of the Christ, I've never seen a film produced and marketed explicitly for Christians, a fact that probably explains the dearth of lawsuits with me as the defendant. Two prime reasons explain this gap in my movie-going experience: one) I'm not a Christian and B) the reputation such films have for being rancid treacle. Mainly reason B. Few have used terms like "jaw-droppingly good" to describe Fireproof, Left Behind, Suing the Devil, et al. (All of which begs the question: If a good number of America's wealthy are Christian and presumably evangelistic, why can't they scrounge up enough scrilla to make a decent fucking movie?)

Consider Courageous, a film this column neglected in its release week despite our dedicated coverage of Christian cinema. With its "PG-13 for some violence and drug content," its sterling cast of up-and-comers (including director Alex Kendrick, Ben Davies, Kevin Downes and Rusty Martin Jr.), and a better-than-average IMDb rating, this just might be the big step forward for Christian cinema and the film that turns me away from my life of hedonism onto the path of the righteous...

I arrived at the theater in a Vicodin haze, exhausted from a lack of sleep, the socket my wisdom tooth used to occupy throbbing. Thankfully, these circumstances worked to the benefit of Courageous. I found my senses dulled just enough to set aside my objections to some of its sketchier lines of thinking and enjoy it for what it truly is: a hammy, 130-minute PSA for God and better fathering. I was surprised to discover that Courageous wasn't nearly as shitty as it could've been. If all of that seems like damning with faint praise...well, it is. Despite its higher-than-expected entertainment value, Courageous stands as a failed bid for credibility when judged against its secular counterparts -- and the Hollywood issue drama by which screenwriters inadvertently reveal prejudices while trying to address injustice or immorality (think Crash) is already my least-favorite genre. 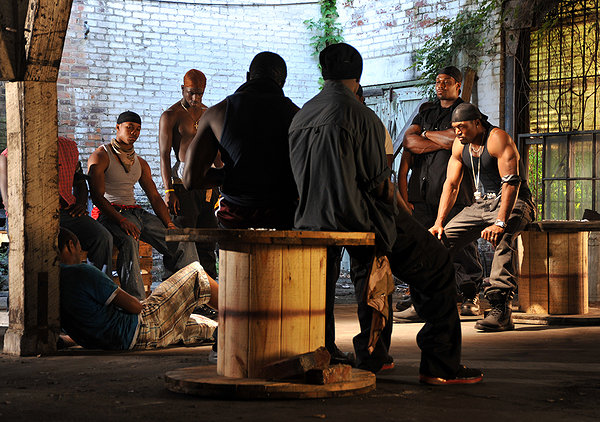 A good Christian knows that when black people congregate, it's bad news!

Courageous satisfies all the requirements inherent to that genre while bringing a whole new set of flaws into the mix, but being rough around the edges is part of its charm. For instance, its four central characters, sheriff's deputies who recover a surprising amount of drugs for such a seemingly small town, look and act, in one key scene, like a Special Olympics version of Vic Mackey's Strike Team. We have the fat leader, who spends most of the movie in abject fear of running five kilometers while breathing through his mouth; the stand-in for Shane Vendrell, only a decade older and subtly scarred by plastic surgery; a Lem-alike, young, vaguely handsome and wooden; and the token black dude, who, in this incarnation, is always squinting. This Strike Team gets a fifth member, though, in the form of Javier, a Hispanic handyman they "adopt" 30 minutes in.

The film takes a good hour to really get cooking. After a relatively decent first act depicting police action that's only slightly scarier than what one would find on ABC Family, Fat Vic Mackey's daughter dies unexpectedly on the way home from a concert he was "too busy" to attend, so the guilt sets in. He decides he needs to be a better father to his remaining son, who says he's sneaking out for five-mile runs but is probably snorting his little-shit body weight in coke like everyone else in Anytown U.S.A., and cajoles his friends into signing pledges to also be better fathers because middle-aged white guys can't do anything alone. Commence a second hour of friends sitting around and lecturing each other about their faults, with a shootout and the occasional (admittedly funny, if inorganic) joke thrown in for good measure. It ain't on par with the gunplay in Heat, but let's give credit where credit's due. Director/star Alex Kendricks knows what Middle America wants: Shootouts, broad farce and an hour of instruction, the kind of content we can ABSORB, open-mouthed and drooling, rather than analyze. 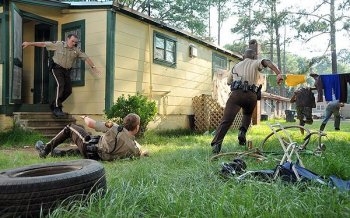 What's the matter? Never taken a shortcut before?The disparity in acting ability among the thespians is another source of amusement, particularly in scenes where a decent actor is forced to interact with one who makes my ninth-grade turn as Young Siward in Macbeth look downright award-worthy. Javier and Token Black Dude at least deserve guest spots on CSI with their work here, but Lem-alike and Javier's wife are so painfully off-key, I had to check my ticket to make sure I wasn't watching a montage of mid-'80s D.A.R.E. commercials, replete with implications that black people are cause and victim of all of society's ills. While great care is taken by Token Black Dude to explain that most of the black kids in the neighborhood are drug dealers because their fathers abandoned them, it's a source of discomfort when a film largely about white cops in a white-bread town casts all villains as black (to be fair, the greatest source of racial discomfort is when Fat Vic Mackey, after hiring Javier to build a shed in his backyard, immediately asks to see his permit). An unfortunate byproduct of featuring such shoddy acting in such a serious movie: very few characters actually shed tears when they cry, which is the weirdest fucking thing.

The most uproarious, surprising moments in Courageous come when two of the fathers interact with their daughters...and unconsciously hint at ongoing sexual abuse. When Fat Vic Mackey's 9-year-old daughter (whose bed lies beneath a purple-and-silver placard that reads MY PRINCE DID COME, HIS NAME IS DADDY) asks him to slow-dance with her in public, a proposition he uncomfortably rejects shortly before she describes the act of slow-dancing while the camera pans up her body--well, let's just say I had to stifle an uproar to avoid an altercation with the gratingly loud family seated before me. And when Token Black Dude, concerned by the attention boys are paying to his budding daughter, takes her out on a date, asks her to give him her heart until he's ready to give her away, and seals the deal with a diamond-heart promise ring which she receives with gracious oohs and ahhs even though she should be calling a hotline, I no longer felt like laughing; I felt like I needed a shower.

All in all, Courageous is what it is, a bare skeleton on which the writers have hung screeds imploring fathers to be better fathers. (Had my own father seen it before he kicked the bucket, I might not have spent my childhood waiting in a filthy corner for beatings and meals consisting entirely of Cheetos while Hanna-Barbera repeats flickered on the Zenith.) In doing so, they reveal the occasional racist or sexist sentiment, the most obvious of which comes when the dutiful wives smile vacantly while their husbands sign a pledge to, among other things, reign as the "spiritual head of his household." Is it worse than Crash? Slightly, and the fact that it features another optimistic, deeply spiritual Hispanic handyman who counters white characters' prejudices while still aspiring to assimilate into white working-class culture does nothing to deter the comparison. Is it better than it has any right to be? Absolutely; its 130 minutes passed rather quickly, and amateur sociologists will find a lot of subtext to chew on. Then again, that could be the Vicodin talking.

MINORITY REPORT: The trailers make Courageous look like a sequel to Stand By Me where River Phoenix never died and everyone became police officers. This film sold out three screens at once last week while 50/50 failed to find an audience, so I guess they're doing something right. - Joseph "Jay Dub" Wade