The Ides of March

EXPECTATIONS: I love the beginning of Oscar season. There's a quick rush through September and October to get a bunch of serious dramas with big names out the door, as if to signal to movie theaters that Blockbuster Season is over, and they won't be be making as much money. Of course, the movies with real awards potential won't be released for a few more weeks, so this is kind of like watching a bunch of old ladies fight to be the first through the doors of the local supermarket. You can push your way through, ladies, but that's yesterday's milk you're getting.

REALITY: Every once in awhile, something happens in real life that's timed so well with a movie release, it's almost like viral marketing. I understand the ideas and motives behind the Occupy Wall Street movement, I do. What I don't understand are the side-protests being held in town squares all across the country in the belief that the protesters are showing "Solidarity" with their brothers and sisters in New York. Hey, there directors of the "Occupy Duluth, Iowa" movement, it's not showing solidarity when the guys in New York are getting arrested and pepper sprayed. You are going to Outback Steakhouse when you're done. This is why it felt a little awkward to me watching a movie about the inherent corruption in the political system in a theater literally blocks from a halfhearted protest of corruption in the political system. 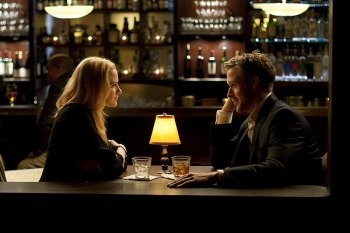 It's nice to have a quiet drink, just the two of us. No George.The Ides of March follows annoyingly idealistic campaign staffer Steven Myers (Ryan Gosling) as he tries desperately to get his candidate, Governor Mike Morris (George Clooney), through the Democratic Primary Elections and into the White House. When he is contacted by opposing campaign manager Tom Duffy (Paul Giamatti) about switching teams, several events occur that make Steven privy to a nation-changing scandal. Following him are New York Times reporter Ida Horowicz (Marisa Tomei) and even more annoyingly idealistic intern Molly Stearns (Evan Rachel Wood). If you're curious what this scandal might be, just realize that this is a movie about politicians and there is an intern involved. That's right. What we have here is "George Clooney Says Stuff About Politics: The Movie," and one of the things he has to say is a Lewinsky comment.

This is a character-driven drama about someone who isn't necessarily a good character. It's supposed to be a commentary showing how easy it is for someone to switch from doing what's right to doing what's right for them, but Steven's idealism is completely false the whole time. The instant things stop running smoothly, there's not even a conflict, he just immediately goes into sleaze-mode, and he's not even as good at it as everyone else around him. (Granted, no one is as good at sleaze-mode as Paul Giamatti, but still.) I realize that's the point of the movie, but the transition is so instantaneous it feels odd. It seems like there's a scene missing somewhere with a crucial piece of development that Clooney cut out so we could include more shots of Ryan Gosling staring intently at things. 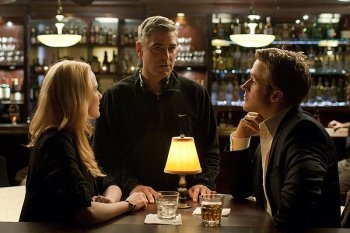 Hey, guys! What ya doooin'?Of course, Ryan Gosling is very good at staring intently at things, so why not let him? In my Moneyball review, I talked about how Brad Pitt's facial expressions make his performance. Gosling is the opposite end of the spectrum. He has the remarkable ability to nail a performance by showing absolutely no emotion on his face. It's a trait he shares with Clooney, so we have a conflict here that's basically a young good-looking guy and an older good-looking guy looking at each other blankly, and somehow there's actual tension. Not just of the sexual variety, either. (Although there is a scene where Steven starts watching Mike on TV while he's in the middle of having sex with a woman. He doesn't stop, he keeps going while watching TV. This has been Brief Moments of Subtext with Martin R. Schneider.)

However, none of this helps the movie reach the incredibly high goals it sets for itself. It feels like this political thriller should be enthralling, but it never reaches past the point of "pretty interesting." There's a completely solid cast here giving the strong performances that we expect from them, and that essentially carries the movie. Everyone does what they do best: Giamatti grins like a scumbag; Phillip Seymour Hoffman monologues passionately; Clooney is charismatic with a dark side. These are all things that we know these people can do. They make this a good movie, but it feels like an opportunity squandered. (I should add that as a testament to Clooney's directing capabilities, he did manage to bring some emotion to a scene that is literally just a shot of a truck sitting in an alley for thirty seconds. It's not much, but it's impressive.)

You keep waiting for the film to do more than just say "Power sure does corrupt, right guys?" but it never does. In fact, the last shot of the film essentially summarizes the preceding 100 minutes. It focuses on Ryan Gosling's blank stare as he gets ready to start a new, more powerful position. The entire time, ominous Imperial March music plays loudly in the background. I thought it was clever at first, but as it went on, it bordered on ridiculous. Then, as it went on even longer, I started to like it again. This is pretty much true of the entire film.

MINORITY REPORT: Never give your movie a title with a built-in catchphrase. Regardless of how good it is, Ides of March will inevitably inspire somebody to say "Beware the Ides of March." I expected better from you, Wall Street Journal. - Joseph "Jay Dub" Wade