EXPECTATIONS: I can't remember when I first heard about You're Next, but I'm assuming it was way back in 2011, when it premiered at Fantastic Fest and critics called it "the Scream of home invasion films" or something like that. I'm not the biggest fan of director Adam Wingard, who never met an excessive stylistic flourish he didn't like, but I've waited almost two years to see You're Next, which boasts an incredible trailer, a bunch of V/H/S alumni and Barbara Fucking Crampton. I love Barbara Crampton. 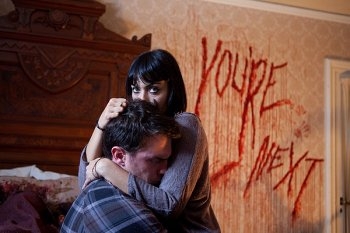 So that's why it's called that.

REALITY: There's a running joke down here at the Current Releases office (or maybe only in my head) that when I call dibs on the films I've been longing to see, they usually disappoint. You're Next is that rare exception. It's easy to review bad films, challenging to review the mediocre ones and harder still to review the greats without coming off like a gushing fanboy, but here it is: I loved You're Next, which is certainly the Scream of home invasion movies but also, surprisingly, the Scream of dysfunctional dinner-party dramedies, Adam Wingard films and the Dwight Twilley Band's "Looking for the Magic."

You're Next even begins with a nod to Scream, delivered as a violent set-piece prologue before it slows down for introductions to the Davisons, gathering at their secluded vacation home for a family reunion. There's the father, Paul (Rob Moran); the mother, Aubrey (Barbara Crampton); their children, Crispian (AJ Bowen), Drake (Joe Swanberg), Felix (Nicholas Tucci) and Aimee (Amy Seimetz); and their children's lovers and spouses, Erin (Sharni Vinson), Kelly (Margaret Laney), Zee (Wendy Glenn) and Tariq (Ti West). We learn quickly that Aubrey's on painkillers for some unexplained reason, there's an ominous pall over the reunion, and Drake and Crispian are perpetuating a decades-old sibling rivalry built on Drake's penchant for passive aggression.

That's a pretty familiar premise for many plays and movies looking to explore family dynamics through the frugal use of a single location. Hell, this type of dramedy is almost a genre unto its own. But You're Next puts a clever spin on this, as their house is beset upon by three crossbow-brandishing masked killers (L.C. Holt, Simon Barrett and Lane Hughes), and the Davisons must put aside their differences if they want to survive the night. That's easier on paper, however. In one of the film's funniest moments, Drake and Crispian argue over who's the faster runner, nevermind the fact that Drake has an arrow lodged in his back, Crispian's decidedly on the chubby side and the killers are firing a barrage of sharp bolts into their majestic mahogany-walled dining room. 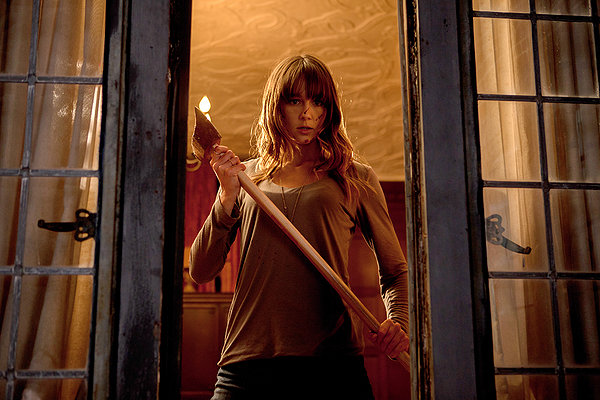 
This is a film that operates like a steam locomotive -- clunky beginning, gathering momentum, blazing speed -- built on a surprisingly adept engine for tension and laughs. Barrett, who also wrote the screenplay, deserves most of the credit here, writing a defining moment for each character in a sizable cast. But Wingard gets the improvement award. In You're Next, he appears to have shed his excesses, opting instead to deliver a lean ninety minutes that balances tense chase sequences, gross-but-not-too-graphic violence, reversals of expectations, plot twists and awfully morbid humor. This is the kind of movie in which you're supposed to laugh when one character bleats, "We're all gonna fucking die in here!" Or when, fresh from a kill, a maniac in an animal mask sits on a couch next to a corpse and enjoys a little music. Yeah. It's that kind of movie.

Wingard's quantum leap in directorial ability, I think, stems at least partly from the cast, which includes six directors (Barrett, Laney, Seimetz, Swanberg, West, with Calvin Reeder and Larry Fessenden, in uncredited cameos) and Crampton, the wife of fan-favorite horror director Stuart Gordon and a veteran of The Re-Animator and From Beyond, two of the best horror films of the 1980s. I don't want to rob Wingard of the credit he deserves, but by surrounding himself with that much independent talent, it's difficult not to learn a thing or two about directing effective horror-comedy on a budget.

And boy is You're Next effective ... and subversive. While it relies too heavily on the aesthetic pleasures of tits to be classified as progressive, its characters behave intelligently. Without spoiling anything, one, in particular, emerges as the smartest horror hero in a long, long time. In each situation, she behaves how we'd hope to behave, whether she's escaping the onslaught of bolts, triaging wounded Davisons, fighting off the killers, etc. There's a wonderful scene where she flips the "failed to make sure the killer's actually dead" trope on its head. She makes mistakes, yes, but they're the miscalculations of adrenal thinking, not the kind of bullshit errors that serve only to advance the plot (see: Evil Dead). Hardly the typical final girl, she's neither virginal, maternal nor weepy -- and she's no fighting fucktoy either.

Because of its chief flaw, some wooden acting and questionable shooting choices in the first reel, You're Next proves that assigning numerical scores to films is inadequate and limiting. We're supposed to rate movies as the sums of their parts, even when some parts are so fucking good we can overlook the bad ones. You're Next isn't perfect. Neither was The Cabin in the Woods. Or Resolution. Or the best segments of V/H/S. Or Scream. Or The Return of the Living Dead. But these films, all self-aware crowd-pleasers who ask their audiences to reconsider their predecessors as they reinvent the old, are vital to the evolution of horror. You're Next proves that with the right touch, a loose collective of indie filmmakers, led by Wingard and Barrett, can breathe new life into a flagging genre and make the home invasion film fresh again.

MINORITY REPORT: So, is this like a smart version of The Purge? Instead of trying to introduce a ridiculous high concept to the home invasion movie, they've realised that in order to subvert a genre, you need interesting characters and ideas. - Ian "Professor Clumsy" Maddison