EXPECTATIONS: I have been quite intrigued by this film for a while now. Miles Teller is a fantastic actor and I will probably promote anything he's in. Further, this comes from director James Ponsoldt, who gave us last year's great Smashed. And the film is coming to us from A24, a brand-new distributer that already brought out two of the best films of the year. But what intrigues me the most is that this comes to us from writers Scott Nuestadter and Michael H. Weber, who were the masterminds behind 500 Days of Summer. I like that film a lot, because it's actually an incredibly dark story of a creepy, obsessive man that's hidden in the disguise of a typical rom-com. Since this also appears like a typical boy-meets-girl story, but has this much talent behind it, I'm positive there has to be a lot of deeper levels to this film than first appearances let on.

REALITY: I wonder what's happened in James Ponsoldt's life where he's now made three films in a row about alcoholism, two of which are about young alcoholics, and yet has managed not to come off as preachy in any of them. It's a very strange calling card, but he wears it well, because his other trademark is an intense amount of heart.

That's so sweet... he doesn't know where his next drink is coming from.


After being dumped by his girlfriend Cassidy (Brie Larson), high-school party favorite Sutter Keely (Miles Teller) sneaks into a bar and gets trashed, eventually blacking out on someone's front lawn. There he's found by Aimee Finickey (Shailene Woodley), an insecure shy girl who has trouble fitting in with the other students. The two of them form a bond, which leads to a romance. However, their relationship is plagued by Sutter's self-loathing and alcoholism, which he passes off as living in the now.

I have to praise this film for not conforming to ridiculous teen stereotypes. Sutter doesn't have to hide their relationship because he's popular and she reads manga, Aimee is fully aware that Sutter still has feelings for Cassidy, Cassidy's new boyfriend reveals his insecurities to Sutter at one point. These are fully-realized capable characters. I kept waiting for a ridiculous misunderstanding to happen and drive the characters apart, and it never did. The closest we get is when Sutter has an overreaction to a justifiably-upsetting incident, and the fight is cut short by a quick moment which caused audible gasps in my theater. (I won't reveal it, but it very well could have been called out as a cheap way to get a reaction if Ponsoldt hadn't brilliantly built the tension immediately beforehand.) 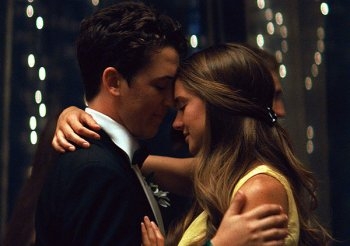 Take him home, love. He's had one too many.Similarly, there are layers of complexity behind each of these people, even though Neustadter and Weber decided to drop any pretense and hit you in the face with how dark their leading male is this time. Sutter is a good person at heart, but he's also impulsive and self-centered. Aimee is not the "nice girl" who comes to teach Sutter the error of his ways and save him through love, though it certainly seems that way at first. No, Aimee has unrealistic expectations and is willing to let herself be compromised because someone is taking an interest in her. Their relationship is believable and realistic, as they take many of the good and bad parts of each other. Sutter encourages Aimee to stand up for herself, but he also gets her on the path to drinking as much as he does. Similarly, Aimee is the reason Sutter starts thinking of his future, but she's also an enabler for his self-destructive behavior. Somewhere in the middle of this is Cassidy, who clearly cares deeply for Sutter, but had to get away from him because his influence was detrimental to her future. It's almost as if relationships and emotions have different layers and responses. That's not what movies have taught me until now!

Most of this connection is made possible by the incredible chemistry between Woodley and Teller. Both of them have this natural way to work dialogue that makes it seem effortless. The strength of their performances, and the fact you can tell they're two people who genuinely like working together, really are the driving force behind the film. It also helps that the two of them both look and sound like actual high-school students. The supporting cast pulls their own weight as well, including Kyle Chandler playing the anti-Coach Taylor as Sutter's estranged father, and Bob Odenkirk, who only has two scenes, but delivers a perfect setup for Miles Teller to break our hearts. The only threads that seem really unresolved are Sutter's relationship with his mother (Jennifer Jason Leigh) and his sister (Mary Elizabeth Winstead), but Leigh's one triumphant scene makes up for it.

The Spectacular Now takes its title from Sutter's claim that he prefers to live in the now, which prevents him from ever considering consequences or outcomes. But the film starts and ends with him staring at a college admissions essay, wondering what the future is. This is a film I can understand and empathize with, because the future is a terrifying thing, especially when as far as you can tell, you don't have one. Especially when they're young, people are told "You've got your whole life ahead of you, there's more than this!" but that is impossible to see sometimes. Living in the now is the easiest way to handle this, sure, but sometimes we delude ourselves into thinking "The Now" is better than it actually is. Or worse than it is. Sometimes the now means we force ourselves to wallow in our own misery, even while surrounded by people who want to see us succeed. This is a real feeling everyone has, which is why most of all, I'm grateful that the film ends on a note of hope. Genuine hope, not that pretentious crap they pulled in 500 Days where Joseph Gordon Levitt meets a girl named "Autumn."