The Mortal Instruments: City of Bones

EXPECTATIONS: The woman who wrote these books goes by the name Cassandra Clare. The main character's name is Clary. I really feel like I should be able to stop there, but that's not even the base camp of the Cassandra Clare mountain. Essentially, Clare got her start on the internet as a famous fan-fiction writer, because we somehow live in a world where that is something it is possible to be. Years ago, she wrote this three-book long Harry Potter fanfic called The Draco Trilogy that a lot of people really enjoyed, mainly because it stole liberally from a bunch of fantasy authors that a lot more people enjoyed, and I'm not just talking about J.K. Rowling. Two weeks after posting the final pages of her ONE MILLION WORD epic, Clare took the stories off the internet because of her professional writing career. When the first Mortal Instruments book came out, all the people who spend way too much time on the internet went out and bought it... only to discover it was basically the same thing they had already read for free, with the names changed to avoid legal consequences.

That's right, folks. I am literally watching the film version of an obsessive fangirl's magnum opus that was written to justify her love of a prissy fictional character. This is what is happening, and I hate everyone and everything right now. 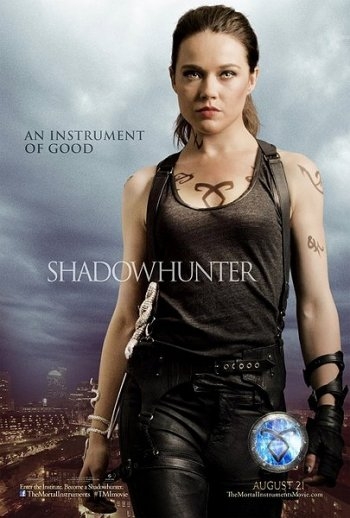 A beautiful and unique snowflake.

REALITY: I don't like badmouthing Twilight anymore. It's hacky, it's easy, it's outdated, and those movies actually somehow stumbled their way to being accidentally amazing. What I will bemoan, however, is the lasting effects it seems to have had on young adult literature and film, and especially the problems it has caused with classic horror characters and monsters. No, I'm not saying "Waaaahhhvampiresdon'tSPARKLE ahbloobloobloo." I'm saying that somehow in the past ten years, vampires, werewolves, demons, and the like have all just become incredibly... boring.

The Mortal Instruments: City of Bones, which barely bothers to explain what either of those things are, follows Clary Fray (Lily Collins), an incredibly normal girl who learns that she's actually super-special because of course she is. After she starts seeing things no one else can and drawing symbols in her sleep, Marble Hornets-style, Clary and her super-clingy best friend Simon (Robert Sheehan) are thrust into a secret underground world of supernatural beings, led by a pair of cheekbones in a blonde wig named Jace (Jamie Campbell Bower). It turns out that Clary's mother (Lena Headey) was actually a super-powerful demon hunter who stole a magic cup from a rebellious hunter named Valentine (Jonathan Rhys-Meyers). Clary also learns that her entire life has been a lie and her memories have been tampered with since she was a child. She takes this news surprisingly well, because to get upset would require her to have a personality.

There are other characters in this film as well that are Clary and Jace's allies, but I'm not going to introduce them because the film doesn't bother to either. We're just expected to know who these people are and their connections to each other, and we're expected to care about them because... they exist? There are entire characters, entire plotlines that could be excised with no change to the story, as weak as it is. One male character, Alec (Kevin Zegers), is there just so that he can be accused of, and be shamed for, having a gay crush on Jace. This announcement comes with absolutely nothing to preface it, except that he spends the entire movie acting like he hates Jace with a passion. 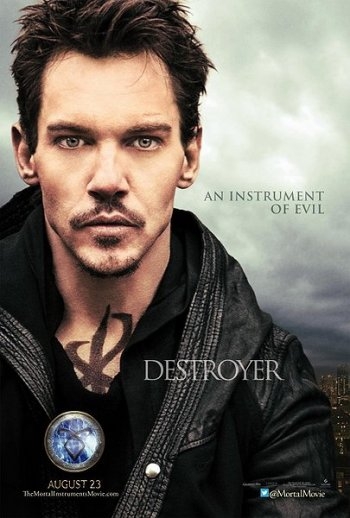 A misunderstood ragamuffin.The "You're in love with Jace" outburst is just one of 1000 examples of terrible dialogue littering the film. Everyone keeps talking in pithy quotes and long speeches, none of which explain the convoluted mythology, or garner any goodwill towards these characters. It's all so very absurd. At one point I burst out laughing in the theater, because the fact that the letter "W" is the letter "M" upside down is played as a major plot point, and we're supposed to take this completely seriously. My personal favorite is a moment where Clary yells something to the effect of "I don't remember having my memory tampered with!" and the camera holds, silently, for about five seconds afterward. This is almost a joke, but for it to read as one, someone should probably react. That means changing your facial expression, Jamie Bower.

City of Bones follows a recent disturbing trend in fiction, particularly fiction aimed at girls, where the oh-so-perfect main character is placed in a love triangle with two angsty pretty boys. This movie takes it one step weirder by pitting the boy she loves like a brother against the boy who may or may not actually be her brother. I'm not sure why anyone thought this twist was a good idea, other than this being soap-opera schtick where two people can't just be together because they like each other and have chemistry, there must always be a reason their love is forbidden. A creepy, incestuous, reason. Remember that the initial audience for these stories were people who got off to Sam and Dean Winchester making out.

Just once I'd like to see one of these where the heroine doesn't have this issue. It never comes up. Maybe the dudes she's with aren't into her. Maybe they each have love interests of their own. Maybe they're not dudes at all. Maybe she's gay. Maybe they're gay. Maybe she's a little bit more concerned over the demons that are trying to kill her family than who she's going to have needy, self-loathing, missionary sex with.

I bring this up because there's this really weird moment in City of Bones where Clary needs to talk to Magnus Bane (Godfrey Gao), a powerful warlock, and Jace decides she needs to be sexier in order to get near him. She borrows some leather boots and a skimpier outfit, and she is also immediately mocked for wearing them. This becomes her uniform for the rest of the film, because somehow the less practical of an outfit you wear, the more of a badass you are? What's worse, though, is that somehow the more revealing, more sexual clothing, is implied to be crucial to the success of their mission. Clary's importance to the team is wrapped up in how much she's going to show off her ass. She is told that her worth is solely based on her appearance, and then she is still called a whore for said appearance. I would say this is clever commentary, but nothing about it seems to be played in any way other than in total seriousness. Then, it turns out Clary's appearance didn't matter anyway. Magnus knows who she is already, and he is gay.

You could presumably make the argument that Clary needed to change her clothes so that she could get into the nightclub where the Magus is, but that just begs another question: Why the hell are vampires and warlocks always hanging out in clubs and raves anyway? Does becoming a member of the undead legions give you a thirst for trance music as well as blood? Is it an excuse to put people in leather? In this case, literally, yes. The whole film is basically like these nightclubs anyway: A loud, self-obsessed spectacle completely devoid of meaning where pretty people sway around thinking of nothing but how miserable they are.

MINORITY REPORT: Wait, I'm confused. Is this Draco Malfoy fanfiction that someone dropped in a vat of Twilight pages, or did she literally rewrite a Blade movie by deciding Wesley Snipes wasn't enough of a Mary Sue character? Young adult fiction is weird. - Joseph "Jay Dub" Wade