Rise of the Guardians

EXPECTATIONS: I would love for this to be the year that people stop pointing at Dreamworks and saying "Nyah, nyah, you're not Pixar." Given that Pixar's been good-not-great lately and Dreamworks has been on a winning streak, it feels like it's time to put this completely fictional rivalry behind us. Dreamworks seems to be running two to three animation squads at a time, which is why it produces so much more than Team Bouncy Lamp. Squad "A" produces labors of love and value, like How to Train Your Dragon and the Kung Fu Panda films. Squad "B," who we shall refer to as "The Shrecktacles," produces the cash grabs, and even those have been better than normal lately. Rise of the Guardians looks like it's coming from Team "A," especially since Guillermo del Toro has attached his name to it. Though, on second thought, that's hardly a signal of quality anymore.

REALITY: I've often said that we are all-too-willing to let films slide based on the fact that they are aimed at children, as though that somehow gives them license to be, well, crap. After much deliberation, I've come to the conclusion that this is because children's films are made by people that hate children. Or, at the very least, never spend any time around them. Case in point: Any holiday movie aimed at kids in the past 20 years does this annoying thing where they need to make Santa Claus "Kickin' Rad" and "Hip to the max!" and "A Bunch of Other Things Kids Never Actually Say!" For some reason, producer think kids will like Santa more if the elves wear Sam Fisher night-vision goggles and use GPS locators. For this, as for most things, I blame Tim Allen. News flash: Kids like Santa Claus because he gives them free stuff. You don't really need to get more intricate than that. Fortunately, Rise of the Guardians was made by people who seem to understand children, and moreover, actually kinda want them to be happy. 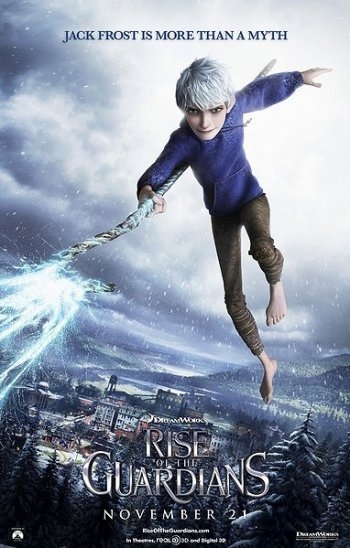 Can Jack Frost even be described a myth?The main character in the film is actually not Santa, but Jack Frost (Chris Pine), the youngest of the mythical beings at 300 years old. The film paints the four symbolic figures as The Guardians of Childhood, a sort of superhero team, which is why the Easter Bunny is literally Wolverine (Hugh Jackman). Each of the Guardians protects a certain sector of childhood, called the center. Santa (Alec Baldwin) is the Guardian of Wonder, Bunny the Guardian of Hope, Tooth Fairy (Isla Fischer) the Guardian of Memories, and Sandman the Guardian of Neil Gaiman books. While attempting to find his center, Jack helps the Guardians fight Pitch Black (Jude Law). This is all a lot more creative than it seems at first.

It's easy to tell when a film actually cares about its audience, and it primarily has to do with the amount of work people are willing to put into it. Let's take a look at the character of Santa Claus. As previously mentioned, the film doesn't make any attempt to modernize Santa, in fact, it does precisely the opposite. Here, Santa (simply called "North" by his friends) is apparently the most bad-ass dude in Imperialist Russia, right down to his sabers and his use of a nesting doll to explain Centers to Jack. (By the way, at that point Santa explains that the reason he does this is because he's inspired by a little baby. It's a good example of slipping in a religious message without it detracting from the film.)

Santa is voiced by Alec Baldwin, but that doesn't matter because Baldwin is doing actual voice acting, and so it sounds nothing like Alec Baldwin. This is called effort. Dreamworks and first-time director Peter Ramsey care about this film so much that they got Roger "Freakin" Deakins to advise on the Cinematography to make sure everything looks good. It pays off, because Guardians is an extremely pretty movie, with numerous rich and diverse settings. The home bases of the Guardians vary in tone to reflect the characters, and all of them look equally great. I will note, however, that nothing in the film is particularly worth spending the extra money for 3D.

Unfortunately, not as much effort is put into the storytelling. Ideas are introduced that are never fully explained, except through the power of "Because." Jack's freezing power is strong against Pitch's Nightmare power because... they're opposing Pokemon? It's hinted at that Sandman, with the power of dreams, is the most powerful Guardian, which would be an interesting point if it were ever explored. Both Sandman and Pitch have power over dreams, do something with that. (Okay, you created awesome-looking nightmare horses, now do something else!)

As you may have predicted, much of this film revolves around the power of children's beliefs. The "I do believe in fairies, I do, I do!" trope always presents problems because there's never any real set rules once you introduce belief powers. Anything happens because of belief powers. Apparently six kids in the Midwest believing hard enough can stop an invading force that's taken over the entire world, and suddenly I'm writing a review for Red Dawn.

I point out these issues mainly because I hold children's films to a higher standard, and I won't apologize for that. First and foremost, this is a film that knows what kids want. Sure, I may want more backstory on Jack's superpowers, but a ten-year-old wants a scene where the Guardians fight each other for ten minutes to see who can collect the most teeth in one night. And honestly, so do I. That scene was hilarious.

There's a scene where Jack makes fun of the other Guardians for never actually spending time around kids, and I feel like the movie understands that point well. It's a children's film that is unashamed of the fact that it is for children, and we need more of those in the world.

MINORITY REPORT: This is like The Expendables for childhood fantasies, right? Like how we all remember '80s action stars, this is for younger audiences whose ultimate bad-ass characters are Santa Claus and Pee Wee Herman. I can get behind this. - Ian "Professor Clumsy" Maddison