EXPECTATIONS: Spike Lee is one of those directors where even his absolute worst films turn out to be interesting failures. The highest of highs and the lowest of lows, as they say. Red Hook Summer is supposedly going to feature the return of Mookie, Lee's character from Do the Right Thing. Knowing that, I hope Spike Lee will resist the urge to retread familiar territory. The last thing anybody needs is Do the Right Thing One More Time.

REALITY: It would be dishonest to call Red Hook Summer a return to form for Spike Lee. This film finds Lee doing much of what he's always done, and this time around it works more often than it doesn't. He calls back to his most iconic film in ways that are both interesting and aggravating, but by and large Red Hook Summer is Spike Lee's attempt to move past that film's legacy and address more relevant concerns that affect his hometown here in the 21st century. 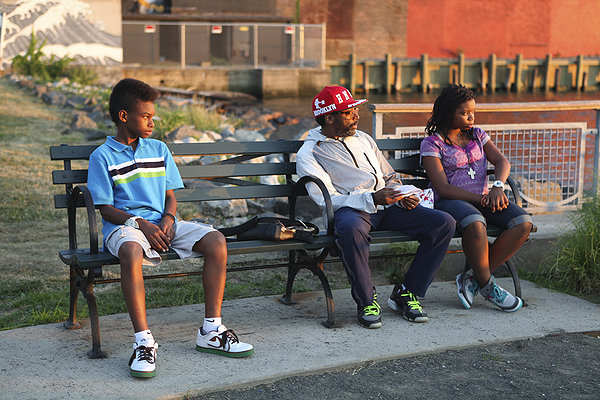 Go on, say it. Go on. Tell those kids to do the the right thing. Go on!

It's the start of summer, and Flik Royale (Jules Brown), a middle-class kid from Atlanta, has been sent to Brooklyn to spend three months with his grandfather, Baptist preacher Bishop Enoch Rouse (Clarke Peters). Over the summer, Flik learns what it's like to live in the Red Hook projects. His grandfather's church is on the verge of going broke, the local gang of Bloods hangs around just waiting to stir up trouble, and Flik makes friends with an asthmatic firecracker named Chazz (Toni Lysaith), whose mother warns her about overusing her expensive inhaler.

This is a film with a lot on its mind as Bishop Rouse fights the good fight against the changing times. Young people (like Flik's mother) are either leaving Red Hook for bigger and better things, or sticking around in the hopes that the NBA or the music industry will come calling; meanwhile, the borough is slowly giving in to gentrification, as wealthier folks start moving into Brooklyn's homes and businesses. At one point, the Bishop decries the city's pollution for killing so many kids with asthma attacks. He even calls out the Queen Mary II, docked nearby and billowing smoke. "We live in a world of Should Not Be," he exclaims.

Flik's arrival in the Hook is the perfect image of everything the locals are afraid of. He's a godless kid from a well-off family who finds it hard to identify with his grandfather's style of worship, and sees little of himself in the community's people. In fact, it's so hard for him to see the world with his own eyes that he has to rely on his iPad 2 to capture it for him. Flik tells people he's making a documentary about his summer vacation, but what he's really doing is hiding behind his middle-class toy. 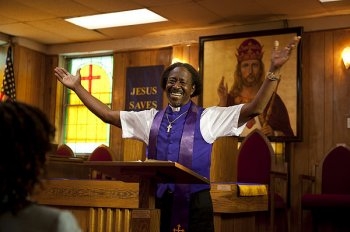 Looking good in purple.Much of the film itself is made up of footage shot from Flik's perspective. As Red Hook transitions between scenes, we see little bits and pieces of the neighborhood shot on iPad cameras, 8mm film stock and other low-resolution means. We see Brooklyn the way Flik sees it, and it's a clever method for Spike Lee to experiment with his shoestring budget. It gives the film a warm, homespun aesthetic, and yet at the same time it's wholly different from the neighborhoods Lee showed us in films like Do the Right Thing or Crooklyn. As Flik records various dead animals, crematoriums and vacant buildings, the notion that Red Hook is a dying neighborhood becomes one of the overriding themes of the film.

At times, Spike Lee seems to be intentionally evoking Do the Right Thing. Lee makes a brief appearance as Mookie, the neighborhood's stalwart pizza deliveryman, but beyond a quick "Hello," he has no bearing on the film. The phrase 'do the right thing' pops up in conversation a handful of times, and Lee makes sure you hear everyone say it. Bishop Rouse's past comes back to haunt him during the film's finale, and the ensuing frenzy recalls the explosive riot at Sal's Pizzeria. The difference here is that the riot in Do the Right Thing is the culmination of a film's worth of racist jabs and heated arguments, while Red Hook's finale feels like such an abrupt left turn that it couldn't possibly be a result of poor scripting.

Why would Spike Lee lean so hard on his past success only to pull the rug out from under us? Perhaps it's because he's trying to tell his audience the time for that film has passed. Do the Right Thing was released twenty-three years ago. There is a new culture emerging, with new problems for the neighborhood to face. Race may still be an issue, but it takes a backseat to questions of faith, class and morality. As Mookie fades into the background, Flik Royale becomes Spike Lee's new disenfranchised lead. I would not be surprised to see Jules Brown headline Lee's next picture. This may be his first acting gig, but it certainly won't be his last.

The dynamic between newcomer Brown and seasoned veteran Clarke Peters is a large part of what makes Red Hook such a joy to watch. The two build a genuine rapport, and Peters especially gives his character the kind of warmth and conviction that rubs off on the actors surrounding him. Just as Bishop Rouse enriches the community, Peters enriches the film. Without his performance, the final act wouldn't feel so deeply conflicted. At just over two hours, Red Hook Summer is a meandering slice of life that's as funny and heartfelt as it is audacious and cynical.

MINORITY REPORT: Trying to recreate the power of Do the Right Thing is like trying to capture lightning in a bottle twice. Everything just came together perfectly for that film and that's not something you can just throw together a second time. It sounds like Spike Lee is right and that we all need to move on. - Ian "Professor Clumsy" Maddison