EXPECTATIONS: This film has been in Development Hell for so long, it's almost amazing to see it actually appear in cinemas. In spite of it having a screenplay by the Coen bros. and having had Colin Firth attached as the lead for a very long time, it still managed to hit every possible hurdle along the way. To give you some idea of just how long, I'll just say that Robert Altman was once attached as director. Now, finally, this remake of the 1966 Michael Caine vehicle of the same name is out there in UK cinemas. Was it really worth the wait?

REALITY: It's been said countless times by countless people that the Coens have two storytelling modes: madcap and sensible. Gambit fits neatly into the former camp; your feelings on it will pretty much reflect your overall feelings of the Coen canon as separated into these two camps. Personally, I found it to be a slight yet all-around entertaining experience. It's no worse than The Ladykillers, but no better than Burn After Reading. Take that however you like. 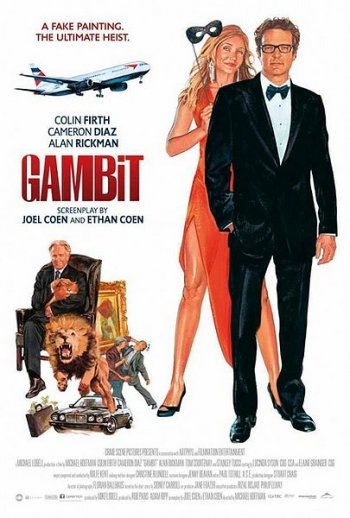 Hey, look at this great poster that's more interesting than the actual film.When art curator Harry Deane (Firth) decides to con his obnoxious boss Lionel Shahbandar (Alan Rickman) out of eleven million pounds, he must recruit Texas cowgirl P.J. Puznowski (Cameron Diaz) to convince him that the work of art forger Major Wingate (Tom Courtenay) is the genuine Monet original he's has had his eye on for some time. Unfortunately, Shahbandar is planning on firing Deane and replacing him with German art expert Martin Zaidenweber (Stanley Tucci).

In a weaker year, Gambit might seem like a great comedy. I can imagine this blowing away the cobwebs of a mediocre summer or providing a refreshing change from stagnant blockbusters. But this year, we've been spoiled. Even our blockbusters weren't particularly stagnant, The Avengers aside. In a year like 2012, Gambit is just another slightly above-average, lighthearted romp.

It's a very funny film, mixing overt gags with slapstick and clever wordplay. There's even a fart joke in there. It sounds odd, but it's an interesting blend of approaches to humour. Going from subtle jokes about double-entendres to running around hotel corridors with no trousers on gives the film that sense of catering to all tastes. But, does it? I'm not convinced that it hits all its targets, and I'm not sure why it couldn't have focused on more believable and trustworthy characters rather than this weird bunch.

All the British characters talk in a weird old-fashioned mode where calling someone "a cad and a bounder" is still a legitimate insult, and all the American characters behave like stereotypical redneck hicks. Having these characters from another time make references to Twitter and appear in contemporary locales is rather jarring. This film takes place in the fantasy past of foreign wishes about the romantic history of contemporary London, or something like that. The point is that it doesn't make sense and never lends itself to a mindset that will try to make sense of it. Like mine.

Colin Firth and Alan Rickman both turn in entertaining performances, but there's a weird element in the cast that I can't vouch for. At what point was Cameron Diaz ever considered an interesting actress? I've always found her to be a terrible blend of overacting and under-preparation. Here she tools around with some vague approximation of a Texan accent that even I, as a non-American, cannot accept. She's terrible. Where did you find this woman? How many better actresses could have played this part with much more aplomb?

Ultimately, this film just doesn't do an awful lot. Yes, it's funny in its way and yes, it's entertaining to watch. But, who cares? In a year of great films, this just comes out wanting. It just never quite gets there. It's never quite good enough. In a week where it stands up against Silver Linings Playbook, it doesn't even get a look in. Maybe if it had been released in 1997, the year in which it entered pre-production, it would have been great (and probably would have had the same cast), but this isn't good enough now.

MINORITY REPORT: The plot for this film sounds an awful lot like the plot of the Mr. Bean movie, except Cameron Diaz probably doesn't get her head stuck inside a turkey. Unless we're counting the film itself. Then it's exactly like the Mr. Bean movie. - Joseph "Jay Dub" Wade