EXPECTATIONS: Didn't we just have one of these a few months ago? Still, I suppose you have to rush these kinds of films out before the cast members all grow up. This is a franchise from which I have never actually seen a single entry and so I can only wonder at the source of its continued success. If Vargo's review of the previous film is anything to go by, then this series is built on smart comedy from a well-observed view of children and families. So, that can't be too bad, can it?

REALITY: Diary of a Wimpy Kid: Dog Days is exactly the kind of family entertainment I can get behind. It explores the torturous years of our lives in such a believable way that kids will relate and adults will remember. It also deals with the difficulties of parenthood in much the same way and, similarly to last year's Footloose, seems intent on bringing these generations of family members together. It also helps that it's hilarious. 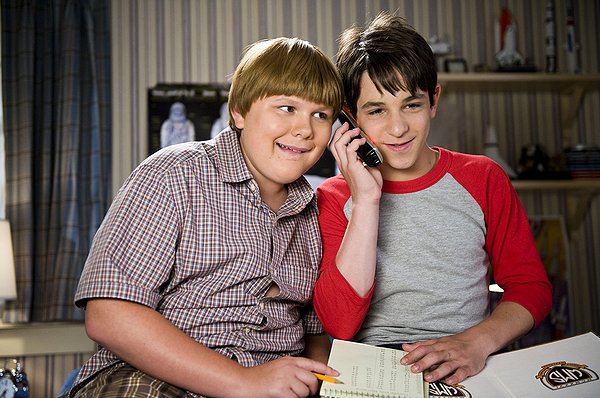 I know we've seen this before, but it is funny, trust me.

It is Summer break for our eponymous wimpy hero Greg Heffley (Zachary Gordon), and he is determined to spend the entire time playing video games, if only his dad Frank (Steve Zahn) would let him get away with it. When Greg's mother Susan (Rachael Harris) decides to start a Summer book club for the kids in the neighbourhood, Greg finds an escape route via his friend Rowley (Robert Capron), who can get him into a swanky country club on his parents' account. There, by chance, he bumps into Holly Hills (Peyton List), the girl he has been obsessing over all year. The plot goes on and on through various convolutions and the whole thing is like an entire season of a sitcom mashed together at once, but it's a good sitcom.

The central focus here is the relationship between Greg and his father. This isn't just a story about a kid with daddy issues, but also a dad with his own issues. Frank had a strained relationship with his own father, and in one surprisingly moving scene, Susan reminds him that he is doing the exact thing he always complained about his own dad doing. So he overcompensates. It feels so real and human on both sides when these two characters struggle to find a connection and find that the easiest thing to do is not bother trying. An idea like that could easily be heartbreaking, but here it's played mostly for laughs. The performances of Gordon and Zahn really work to sell it, too. They're both naturalistic actors with a talent for comedy, and it's nice watching them find the similarities in each other. 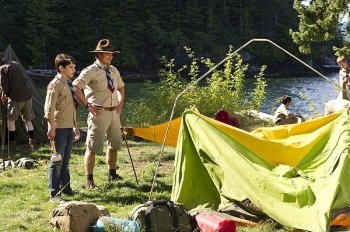 Yeah, that'll do.The only real problem with this is that it is basically explored through a series of amusing skits. Any one of the scenarios presented here could easily be, and probably has been, an episode of The Simpsons or Malcolm in the Middle or any number of other hit US comedy shows. That's not to say that the film has no sense of cinema, it certainly feels freer than any thirty-minute episode of anything could ever be. But, when situations arise and are resolved with the same rapidity, such as Greg being forced to spend a weekend with Rowley's family and finding it intolerable, it often feels like filler. My assumption is that the writers had a whole bunch of gags to fit in and didn't want to have to worry about justifying them in the central plot, so they just threw another plot into the middle of the movie. But, as I said, the film does have a sense of cinema. There is a proper narrative arc running through the whole thing, and by flitting back and forth between Greg's antics at the country club and his time at home with his dad, it manages to work quite well. Just like a kid, the film spends its days in the world of other kids and its nights in the world of the adults and strives to adjust accordingly.

All of these flaws are really incidental, though, because Diary of a Wimpy Kid: Dog Days manages to be one of the funniest films I've seen this year. You never mind that the film veers off into tangents because you're laughing so much. Not one scene goes by without featuring a bloody good gag, and even when the story meanders, we're still laughing. Even if you don't have kids, I'd recommend seeing this film because it finds a level of humour that works for everyone and it finds that level of relatability that adults and kids will both agree on.

You see, this isn't a film that aims for a juvenile mentality so that kids will enjoy it and then throws in a few rude innuendos for the parents, it's a film full of smartly written comedy that appeals to everyone. It reaches out to kids and parents alike and acknowledges that it can be tough being a kid, but being a parent is hard as hell. Why don't you try and help each other out? Life isn't easy and you probably look ridiculous most of the time, but let's all try our best anyway. After all, we were all wimpy kids once.

MINORITY REPORT: I'm glad to hear Steve Zahn gets the screentime he deserves in this movie, because he was criminally underutilized in the other ones. The only problem is that the apex of Father-Son relationship movies was already reached with A Goofy Movie, so why bother? - Martin R. "Vargo" Schneider