EXPECTATIONS: Some days you wake up and feel like you could take on the whole world blindfolded. The sun shines, birds sing, my checks don't bounce ... Then there are days when you realize that getting out of bed puts you one step closer to oblivion. Hell waits just outside your front door, and you need only turn the knob to greet it.

Today was one of those days.

I mean, really, of all the Hanna-Barbera cartoons to desecrate, why Yogi Bear? If you forced me to rank the most interesting Hanna-Barbera characters, he wouldn't even crack the top thirty, and I'm pretty sure there are only twenty. Well, I guess that's exactly why they made it: There's just less to fuck up.

If ever there were a movie that was going to make me want to steer my car into oncoming traffic or throw myself off a bridge, Yogi Bear would probably be the one...

REALITY: Congratulations, Warner Bros., you just gave birth to a giant steaming 3D shit of a movie. I was kidding earlier when I said I wanted to off myself, but I think I'm going to have to go ahead and do it. You know that one finishing move in Mortal Kombat 3 where the guy takes his mask off and his opponent's soul runs away screaming in terror? Watching Yogi Bear is kind of like that. The entirety of human history is now a sadder story for this having been a part of it, and I don't think I want to live in that world. See ya ... 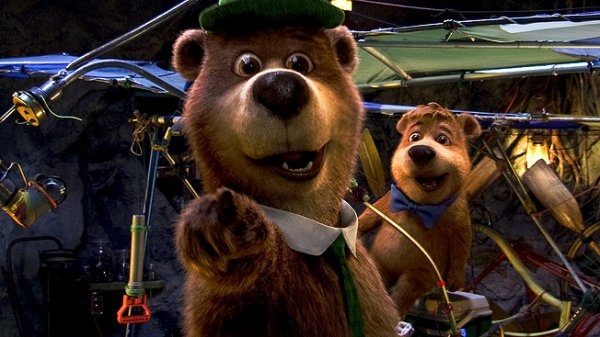 Look, Boo Boo. There's actually someone in the audience.

"WAAAAAIIIT," shouted a somewhat effeminate British voice from somewhere behind me. I spun around on the bridge railing, practically falling into the river in the process. Who said that?

"I did," replied a glowing Rex Harrison in a bathrobe. "I'm your guardian angel, now step down this instant!" I did as he said. After all, it's not every day British people appear out of thin air and tell me not to kill myself. He asked me why on earth I would do a stupid thing like jump off a bridge.

"My guardian angel is Rex Harrison?"

"I'm a doctor, actually," he replied. "Dolittle's the name." Somewhere in my mind, I knew it only made sense. My guardian angel would be the one fictional person who actually enjoys the concept of talking animals.

"Ugh, I just can't take it," I said. "I've spent the whole year watching movies about talking animals, and Yogi Bear is the retarded straw that broke this camel's back. I can't take it anymore! They're badly written, badly acted, badly animated ... Drifting from Furry Vengeance to Marmaduke to Yogi Bear is no way to live."

He paused for a moment.

"Well," said the dead Mr. Dolittle, "If I could talk to the animals..." I stopped him right there. I told him if he saw these animals, he wouldn't want to waste his breath. "What's so bad about a talking bear?" he asked. I began to explain:

Shenanigans ensue frequently in Jellystone Park, as Yogi Bear (inexplicably voiced by Dan Aykroyd) and his sidekick Boo Boo (even more inexplicably voiced by Justin Timberlake) invent a bunch of stupid contraptions in order to steal people's picnic baskets. Why they couldn't just run up and take them is a mystery to me. Or hell, Yogi and Boo Boo speak English relatively well. Why not just walk up to people and ask for food? They're talking bears, but this apparently lends them little (if any) social capital.

Anyway, the plot has something to do with the mayor (Andrew Daly), who actually is functionally retarded, deciding to sell the logging rights to Jellystone Park. Ranger Smith (TV's Tom Cavanaugh) and token woman Rachel (Anna Faris) mount a fundraiser to help save the park, but naturally, Yogi fucks it up by accidentally shooting a barrage of fireworks at the park's guests, and then again by destroying most of the park's real estate. Cloverfield cameraman TJ Miller also shows up as a park ranger with ill intent, though his evil only extends to enabling Yogi Bear in his delusions of idiocy.

"And is that such a bad thing?" asked the winged PhD. "This is a movie for the little ones! You can't rightly expect it to satisfy a man of your age."

But I can expect that. In a year in which Cats and Dogs 2 references a litany of James Bond movies and Legend of the Guardians sports some of the year's best computer animation, there is literally no reason for Yogi Bear to be so narratively and artistically inert. I don't ask for much out of movies like this. It's understood that I'm 20+ years older than the target audience, but if the movie can't at least meet me (or any unwitting moms and dads) halfway and make the effort to entertain everybody, then of what use is the movie? Mom and dad may as well put on a Wiggles video and go make a sandwich or something. This is an $80 million tent-pole holiday film from a major Hollywood studio. They wasted perfectly good money hiring Justin Timberlake to say, "Gee, Yogi..." And yet there's nothing here. Two CGI animals talk to each other, fall down, and dance while real actors stand around watching them. That's it.

"Yogi Bear is a bear that talks. The park is in danger of being destroyed. Animals save the day." If the town mayor were the main character, this would literally be the plot to Furry Vengeance. The only difference being that that film had odd moments of absurdist humor peppered in that made it slightly tolerable. That's probably why the Brothers Warner decided to hold this one off until Christmas. They didn't want to look like a couple of assholes-come-lately trotting out their own shitty "animals save the woods" movie so soon after another one. That would be too logical an explanation. Occam's Razor tells us that the simplest explanation is usually the correct one. In that case, Warners knew what a turd they had on their hands and postponed releasing it until it was absolutely necessary (bullshit, none of this was necessary).

As I explained all of this to my guardian angel, he seemed intensely interested, almost as though he'd never given thought to a talking animal with nothing to say. I made my case for why Yogi Bear made me want to kill myself and everyone around me. I stated it logically, vehemently, and without a shred of irony. He thought for a moment, and then proffered a question.

"But, my boy, if you never stepped up to review these movies and entertain tens of readers, who would? Certainly not ProfessorClumsy. Take it from this stuffy British person, he would never have even bothered. He thinks he's above that sort of thing." I had to admit, he was right about that.

"And think of poor Vargo. Were that this were his job, he wouldn't last a week. You've seen how agitated and depressed he gets over romantic comedies. One viewing of Yogi Bear would surely send him into a fit of madness." Again, the angel's logic was airtight. Vargo's second week on the job was very nearly his last.

"But you," he said, "You're different. You can withstand anything Hollywood throws at you. No man is a failure who can laugh at terrible movies! You're the one who can find the good in even the worst things Hollywood has to offer. You saw the good in The Last Song! You found the funny in Cop Out! You had your heart warmed by Shrek Forever After!"