EXPECTATIONS: Full disclosure: I love these films. I love these characters. I love Richard Linklater for helping them exist. If you haven't watched Before Sunrise and Before Sunset, stop reading now and go do that. Before you ask, why yes, it is just four hours of people talking. But it's four hours of pretty people talking about interesting things! It's like TED Talks with a basic narrative storyline! That's brilliant and entertaining and doesn't sound pretentious at all, right? Right?

REALITY: The Before series hasn't changed much in 18 years. In Before Sunset, lead actors Ethan Hawke and Julie Delpy got to write most of their dialogue, and that's about it. Yet despite its simplicity, the series has spent all three films doing something that's unfortunately unique in film: Showing two intelligent, outspoken people developing and maintaining a healthy and functional relationship. Some people might argue that this is rare because that hardly makes for entertainment, that the notion is inherently boring. The simple response to that is "Well, no. It's not." 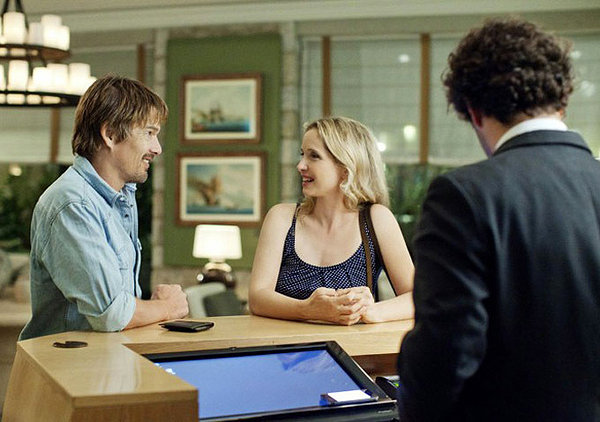 Just so you know, you folks need to check out of the hotel before noon.

Picking up nine years after Jesse (Hawke) and Celine (Delpy) reunited in Paris during Before Sunset, Midnight opens with Jesse dropping his teenage son Hank off at the airport and heading back to the U.S. to be with his mother. Jesse and Celine have twin daughters of their own at this point, and they are on vacation in Greece. Celine gets word that she's got a new job with the French government, but when Jesse suggests that he misses his son in the states, Celine thinks that might spell the end for them. That's it. That's the entire conflict. It's not enthralling, admittedly, but it's also one of the most terrifying issues possible for any audience member that's ever been in a relationship. Because unlike the typical wacky misunderstandings that pervade romantic films, this is a very good and very real reason two people would actually break up.

Delpy and Hawke are still fascinating to watch, and their chemistry remains as realistic as it was in 1995. You get the sense that they truly love these characters, and it says something about the film that I have to keep reminding myself to write "Jesse" and "Celine" instead of "Ethan" and "Julie." What's more, Linklater gives the actors room to play off each other, starting with a nearly-15-minute-long interior car shot in the first act during which our main conflict is set up. These people all have a knack for it by this point; they know what they're doing. Linklater gets a pass on the "turning on a camera and letting the actors do their thing" charge, because he has proven time and time again that this is the best possible thing he could do.

The dialogue in this entire series feels warm and inviting and realistic. Whether Celine is making inappropriate blowjob jokes in a historic church or a group of guys is teasing Jesse about the pretentious novels he writes, all of it seems very natural, which just makes you like these characters more. It feels like reuniting with old friends. The most interesting sequence starts with a tender and passionate love scene between the two, which is interrupted by a two-minute phone call that leads to a thirty-minute argument. This kind of thing happens in every relationship: Someone says the wrong word, the bra gets put back on, and you're left trying to pull off the hat trick of proving you're right, defusing the fight and still getting laid. It's a realistic look at long-term relationships stripped to basic recognizable elements.

Like the other two films, this one is left open-ended, with the couple's fate still unsure as Jesse makes a last-ditch effort to save them that goes on just a bit too long. This is as sensible as it is frustrating, given that the couple faced an issue that can't be easily resolved in 90 minutes. This series never made anyone believe for a second that Jesse and Celine aren't really in love, but this film questions whether that's enough. It then refuses to give you an answer, because there isn't one. This makes Before Midnight substantially darker than the other films, but it leaves on a note of hope that you may or may not be just projecting because of how desperately you want it to be there. I guess we won't find out for sure until the next film comes out in 2022.

MINORITY REPORT: The Before series has always been lacking something. I can't quite put my finger on it. ...Oh, yeah. It needs explosions. - Sean "Keanu Grieves" Hanson