Much Ado About Nothing

Expectations: Because I am a person who spends a lot of time on the Internet, Joss Whedon ranks pretty high on my list of "Things I Mostly Like But Want Everyone To Stop Talking About Forever," coming in right after "Star Wars" and right before "Cats. Just, like, in general." Is he a feminist or a fetishist? Is his banter witty or pretentious? Are his references too referential? It's almost as if when someone makes things nerds like, they will eventually lose all sense of perspective and start either worshiping or actively condemning them with no in-between. Just shut up already.

What makes this film of particular interest, however, is that it's Whedon's vanity project, a movie that's literally shot in his backyard. Whedon had a two-week break in his Avengers schedule, and he decided to spend it getting all of his friends together and making a Shakespearean adaptation at his place. This normally would fall under the division of "Movies Made So We Can Have A Party," which I hate. But since Joss footed most of the bill for this himself, it's more like "Yeah, I'm Having A Party, So Let's Make A Movie." This is a cool concept and all, but why should anyone pay money for Joss Whedon's home videos?

REALITY: When you're adapting a stage play into a film, a good question to ask is "Is there anything that I can do here that I couldn't do on a stage?" If the answer is "No," then you're probably doing something wrong. (Another wrong answer: "Yes! I can use close-ups!") Such is the case with Whedon's Much Ado. There's nothing really wrong with it, but you could have put these people in a theatre and set a Sony Handycam in the front row, and you would have accomplished pretty much the same thing. 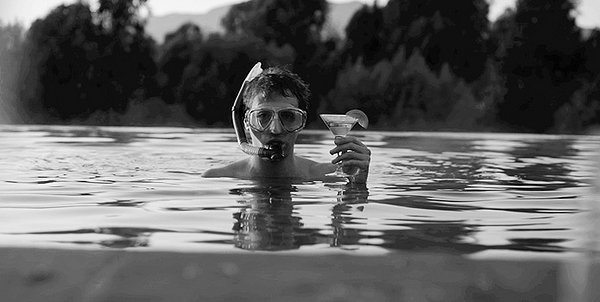 Did you guys know Shakespeare invented the word 'snorkel'?

High school English lesson time, kids: The Prince Don Pedro (Reed Diamond) is returning from a successful battle with all of his cohorts in tow, including his young friend Claudio (Fran Kranz) and partner Benedick (Alexis Denisof). They arrive at the home of Governor-or-somehow-important-person Leonato (Clark Gregg) for a party, which is also attended by Leonato's daughter Hero (Jillian Morgese) and niece Beatrice (Amy Acker). Benedick and Beatrice have a history, as Whedon shows from the first scene, and they are two clever and witty people who hate each other and take every possible opportunity to hurl insults back and forth, so clearly they will fall in love by the end. Meanwhile, Claudio falls for Hero, and they plan to wed, but because Shakespeare was like "Wait, I need to have something actually happen here," the prince's villainous brother Don John (Sean Maher) decides he has to mess with everyone's good time, because he's the bad guy.

Seriously, Don John is one of the most underwritten of Shakespeare's creations. The first line he says is "Hey, I don't say a lot," thereby giving Shakespeare a way out of having to write a lot for him. Then by line three, he just announces "I am also the villain in this, in case you couldn't tell." For this reason, I am almost willing to give Maher a pass for being so unconvincing and uninteresting here.

The rest of the cast, however, is note perfect, Denisof and Acker especially. This shouldn't come as a surprise to anyone, as making pretty people say witty things is pretty much Joss Whedon's forte, and so he chose a Shakespearean adaptation that allowed him to do that with more flowery words. I want to pay special reference to newcomer Jillian Morgese for giving Hero some much-needed attitude, as she's honestly the Nothing that all the Much Ado is about. Also noteworthy is Nathan Fillion as the idiot constable Dogberry. Fillion is arguably the most famous person in this cast, and his role relegates him to a background character that he plays like a Reno 911 sketch. It oddly works, even if it is incredibly obvious that his police station is actually Joss Whedon's basement. 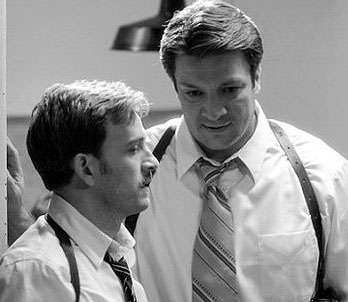 Everyone knows TV adds 20 pounds. Film, however, does not take it back off.This brings me to my biggest gripe with the film: It lacks any real cinematic qualities. This "making movies with my buddies" method is actually startlingly jarring when you start to realize that it doesn't even look like an actual movie. The production values would probably be higher if it had been a play. The biggest example I have here is the unnecessary use of black-and-white. There's no real reason for it, and in fact it detracts from a play whose dialogue often notes the colors of people's faces. It whitewashes everything and makes it look ugly and visually unappealing.


Worse, Whedon directs many scenes quite well here that would have benefited from the use of color, like the entire masquerade-ball sequence. Hell, even the movie's trailer tosses in a smattering of hues just for style, and it's more interesting-looking than the movie itself. I'm going to guess that the actual reason Joss clicked the "greyscale" button in Windows Movie Maker is that the color version actually looked terrible, given the lack of professional lighting available at Joss Whedon's house, but that's what you get when you decide to make a movie at your house.

And so, like Benedick himself, I am torn. The cynic in me wants to condemn this film for barely being, well, a film. However, the romantic in me enjoyed these performances and their inherent silliness so much that it's difficult and nitpicky to really dwell on these faults. These people are very good at what they do, and everyone looks to be having so much fun. A large amount of passion can carry a mediocre film a long way, and it does so here quite easily. It's a charming but unnecessary little film that will be more than enough to satisfy Whedonites and high-school theatre kids. Which is good, because they're the only people who are going to watch it.

MINORITY REPORT: I thought everything Joss Whedon has done was Much Ado About Nothing. Ba-dum-chuh! - Sean "Keanu Grieves" Hanson