EXPECTATIONS: If I didn't know any better, I'd say the people behind this movie were really banking on Miami winning the NBA finals for some decent cross-promotion! There, that's my sports joke. Wokka wokka. But seriously, The Heat's advertising makes it look like a colossal trainwreck. I was no great fan of Paul Feig's last film, Bridesmaids, but maybe he's learned a thing or two since then. That's not too much to hope for, is it?

REALITY: Clearly written to accommodate its cast's talents rather than to tell an actual story that incorporates jokes, The Heat is a veritable desert wasteland of comedy. Every scene appears to drag on into infinity in all directions, with no shelter in sight from the film's overbearing sense of humor. Every once in awhile, an oasis appears on the horizon, but it's only a mirage. Desperate for a laugh, we start scooping up sand and shoveling it down our comedy-parched throats. "Is this funny? This is what funny is made of, right?! Yes, and! Yes, and sand!"

Essentially this is a mismatched buddy-cop movie like so many others. FBI Special Agent Ashburn (Sandra Bullock) is assigned to investigate a series of gang-related deaths in Boston, where she teams up with local detective Mullins (Melissa McCarthy). One is an uptight, by-the-book know-it-all gunning for a huge promotion. The other is a hyper-aggressive tornado of justice trying desperately to keep her druggie brother (Michael Rapaport) out of harm's way. They shout, they argue, they nitpick each other's character flaws in public, and eventually they fight crime. 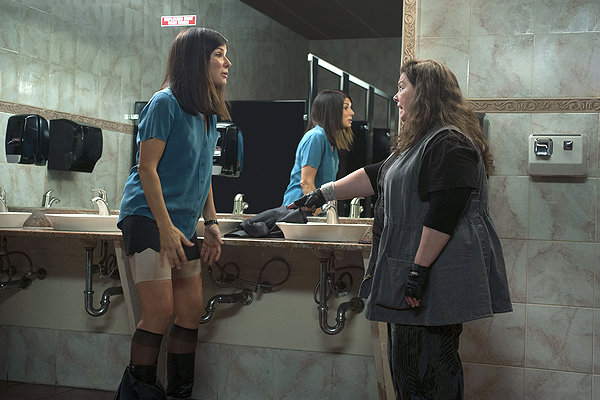 "Here are fifteen improvised reasons why your underpants are weird..."

There's a little more plot involving the rest of Mullins' family and Ashburn's FBI chief (Demián Bichir), but this isn't a film concerned with details like who the antagonists are or what anyone's motive is. It's a comedy! Or at least, it's supposed to be. The Heat is an improv-style shouting match where characters never stop talking for fear that one of them might not get to end a scene by saying "fuck." Few, if any, of the jokes actually build off of one another, leaving a giant mess of one-liners and sight gags that don't cohere into anything particularly funny.

The Heat clocks in at just under two hours; there is not a single justifiable reason why this film should be so long. It's clear that pretty much every scene is cut down from something much longer, which suggests that there was a lot of improvising going on. If what we see in the finished film comprises the takes that were deemed usable, I shudder to think of what a three-hour cut of The Heat might look like.


Of course, The Heat doesn't fail for lack of trying. Bullock and McCarthy really give it their all here, but the characters they're tasked with and the situations they're put into don't offer anything interesting for them to do. Character development is such a crucial part of any story; giving us time to get to know these people helps get us emotionally involved when things take a turn for the worse. In this film, a number of those crucial steps seem to be completely missing. In fact, Bullock's character is so haphazardly written that the film takes what should be an emotional turning point for Ashburn and turns it into the most harrowing thing I've seen in a motion picture all year.

Late in the film, Mullins and Ashburn share the world's angriest breakfast, during which Mullins begins to tear into Ashburn's perfectionist attitude. This prompts the latter to prove how smart she is by attempting to give an emergency tracheotomy to a man choking on pancakes. (For those of you not familiar with tracheotomies, they involve Sandra Bullock stabbing a man in the throat with a dirty steak knife and nearly making him drown in his own blood.) It's about as left-field as an emotional rock-bottom scene can get, and just in case the scene doesn't get its point across, Gabe from The Office shows up as a paramedic to tell her she's a terrible person. I'm sure all of this sounded much funnier during a table read. The way Paul Feig shoots it, though, is just horrifying. I don't want to see this in a horror movie, much less a comedy. 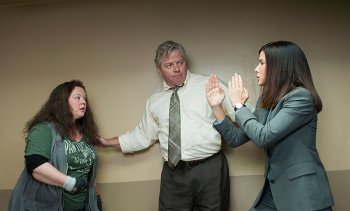 What are you looking at, butthead?Which raises one more point: For a silly comedy about two mismatched cops, The Heat also might be one of the angriest films I've seen in quite some time. I'm not even sure what it's angry about. In the scene I just described, there's at least a reason for Ashburn to become irrationally obsessed with saving a man's life, but the rest of the film plays out as a joyless march through frustration and disappointment. Also, every one of the shit-ton of f-bombs that rolls out of McCarthy's mouth has a genuine air of aggression to it. Is it believable? Sure. Is it funny, though?

The Heat depicts two perfectly capable women succeeding in a work environment (and film genre, for that matter) that is generally considered a boy's club. It revels in its cop-movie trappings right down to the musical cues and sweeping helicopter shots. Hell, it even gives Back to the Future's Tom Wilson more screen time than he's seen in at least a decade! Any other film would be thrilled to have even one of those things at its disposal (and I'm sure Tom Wilson wouldn't mind, either). I guess there's just no pleasing some comedies, though.

MINORITY REPORT: You know there are three sequels, right? Well, no, I guess you wouldn't know that yet... In that case, let me tell you all about this little box set I have here called The Heat Quadrilogy! - Donovan "Future Critic" Laird