Zack: So Cornthwaite goes to South America, trip goes wrong, comes back with evil slug that gets in the pipes.

Steve: Sleeping is difficult. Every creak of the house and every rustle of the trees outside terrifies you. At one point you hear the circus van squeaking on its springs repeatedly, almost as if two people are standing up and bouncing up and down just to amuse themselves.

Zack: Chang you old dog! He must have brewed an oriental love potion.

Steve: Morning breaks over the misty yard. No birds are signing and there are no squirrels bouncing around the yard. You notice immediately that the circus truck is sitting with its doors open.

Zack: "No! Chang! Sharon!" I'm running outside to investigate.

Steve: There is no sign of them, but there is a strange amount of moisture in the truck, on the seats, and an odd smell.

Zack:This is terrible. We have lost the very last members of the original party. My little eight-year-old hands clench into fists. "We're taking this thing out! It has to be in there somewhere. We're going to get that salt truck in here and we're going to salt-crust this dump."

Steve: The salt truck arrives not long after daybreak. The fat guy driving the truck leans out the window and asks, "Where do ya want it?"

Zack: "Start dumping and drive in a circle around the building." While he is doing that I will oversee it and have Karnov go to the gardening shed and get shovels and spades and that sort of thing.

Steve: Alright, Karnov is off getting the shovels. You and Chance are watching the truck dump a line of salt around the house. It's about halfway around when you feel the ground shake. Cracks shoot up the sides of the building.

Zack: "Hurry it up!" I shout at the truck driver.

Steve: He stops the truck and motions that he can't hear.

Zack: I motion for him to get back to pouring.

Steve: He motions that he doesn't understand your motion.

Zack: I motion angrily and run over to the truck to tell him to get it moving.

Steve: You're about halfway to where the truck is stopped when the cellar doors explode outwards. A mass of jelly-like tissue surges out of the cellar, knocking aside the truck. The driver leaps out and the jelly immediately shoots out a pseudopod and grabs the driver, pulling him into its translucent body.

Zack: "Ahhhhhh! This was not my plan!"

Steve: Within the massive body of the creature you can see the softening remains of many animals and people. You recognize Arthur Cornthwaite based on his photograph, although his features are mushy, you see skeletons of birds and rats and dogs, a mostly-dissolved horse and, clearest of all, Wayne Poppins.

Zack: I am eight years old. I am running so fast and yelling so loud.

Steve: Chance is going to throw ninja stars at it, but it's no use. He manages to avoid its pseudopod using martial arts moves but then it crashes down on him like that slime wave at the end of Creepshow. 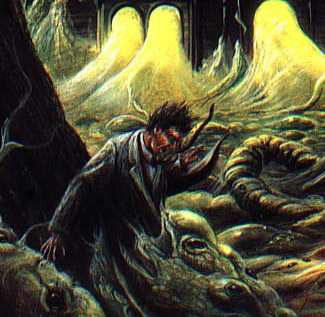 Zack: "Karnov! You fat-headed bar-bender, get over here and shovel some salt on this thing!"

Steve: Brawny and brave, Karnov sinks his shovel into the salt and tosses a pile onto the creature. Its non-flesh bubbles and begins dissolving. He quickly shovels more onto it. The creature retreats.

Zack: It's working! Get him, big guy!

Steve: Suddenly, multiple pseudopods lash out and grab Karnov and drag him into the creature. He shouts in Russian, trying to fend it off with mighty punches and strength techniques, but it is hopeless. He sinks into its goopy body and perishes.

Steve: By the way, you're pretty much insane now.

Steve: Yeah, you can run.