Way back in the pre-history of July 8th we announced our contest inviting readers to submit encounters and artwork from fake D&D modules. Entries were due on the 2nd of August. After careful review, Steve and Zack have picked their three winners as well as singled out a few superlative entries for comment. In the coming weeks the entries submitted in this contest will be compiled into a module and played through by Zack and Steve to celebrate the silliness. In the meantime, find out who is Steve's Next Top Module. 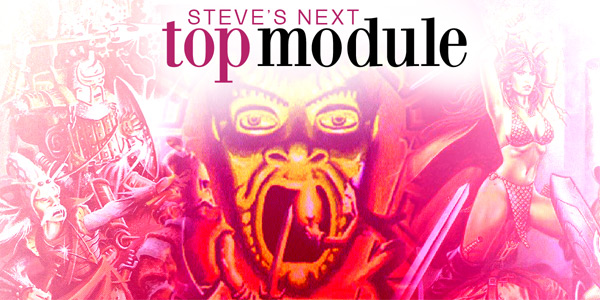 Zack: Let it all out.

Steve: You're a jerk. I thought you said we were going to play through them like I said to do.

Zack: We will play through them, but due to the complicated instructions we gave people and the lack of guidance, things don't fit together as well as I hoped. It's going to take longer to compile this into an adventure.

Zack: This was your suggestion!

Steve: My suggestion was to make an awesome D&D module with babes all over the place. You're the one who messed it up with your rules and being all cute and acting like you don't want to see hot babes battling monsters and it's only me who thinks that way.

Zack: Let's just give away the Amazon gift cards to your Next Top Module.

Steve: Fine, but I'm only going to totally enjoy this, when I should be like 110% enjoying this way over the top.