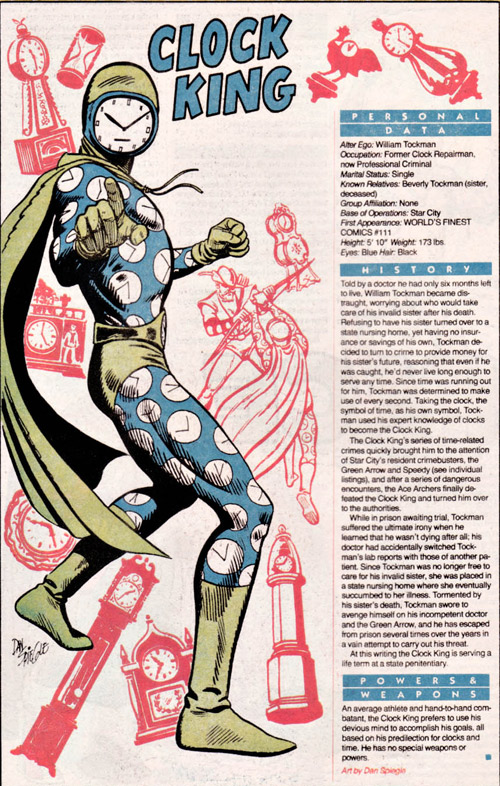 Zack: Remember Dr. Bong? This was the artist's next project.

Dr. Thorpe: Really, if you have a big giant clock on your face, putting little clocks all over your suit is just belaboring the point.

Zack: "Oh hey, look at that clock on my desk. Yeah. This guy could have a clock face, like a watch face, yeah. And he could have lots of clocks. And his power could be to control clocks, like if the hero is fighting him on a giant cuckoo clock he will make the bird come out and knock the hero onto a giant clock with BLADE HANDS.

Zack: It's like he was destined to grow up and be Clock King! Everything in his profile is about clocks. It's like the stats next to a Playboy Centerfold and for every question including ones where it's inappropriate she has responded with "snuggling by a fire." What are your measurements: Snuggling By a Fire. Favorite Food: clocks.

Dr. Thorpe: Being a clock repairman must have given him really relevant preparation for becoming a professional criminal.

Dr. Thorpe: He's just one of those guys who's way too into one weird thing. Like those autistic kids who love trains.

Zack: That may be true to a point but autism usually doesn't make you replace your face with a train.

Dr. Thorpe: He's got a total sob story in his bio, too. I guess we're just supposed to feel sorry for this dork.

Zack: Like I'm reading that. What, did a clock kill his family or something?

Dr. Thorpe: No, he LOVES clocks. Maybe the opposite of a clock killed his family.

Dr. Thorpe: The last one, I guess. I think that kills a lot of people, though. Most people don't go all queer for clocks about it.

Zack: It looks like he's fighting with Robin Hood in the background of his profile. Maybe Robin Hood killed his family. Although I never really looked at Robin Hood as a metaphor for the unknown progression of time.

Zack: "World's Last Batch of Ideas Comics" In this final issue Clock King faces off against The Insidious Blank Frame.

Zack: It says down at the bottom that Clock King doesn't have any powers. He just relies on his "devious mind." Based on that costume that just makes him all the more tragic. I'm sure in the final issue in which Robin Hood and his merry men finally take down Clock King they take the mask off and...gasp...it was William Tockman all along! The guy who was obsessed with clocks and worked as a clock repairman! What a revelation!

Dr. Thorpe: I'll bet all his dialogue is terrible clock and time related puns, too. "You'd better WATCH yourself, Robin Hood! Your TIME on this world is almost up!"