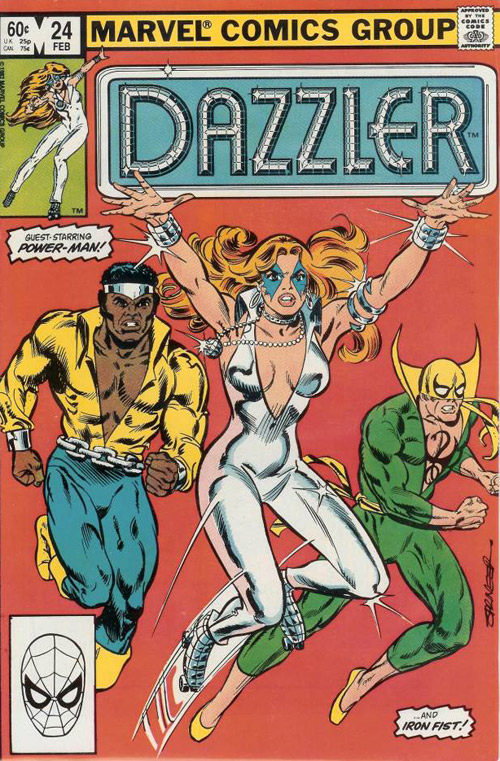 Zack: This is what happens when discos decide to take the law into their own hands. Too many sea breezes Michelle, you're CUT OFF! ZAPPPPP!

Zack: Yeah, if Dazzler ever had to go to the police for a rape kit I have a feeling the desk sergeant would make a note in her file that she was "totally asking for it."

Dr. Thorpe: Even in this image she seems to be pursued by a couple of ne'er-do-wells in spandex.

Zack: Zack: "You seen the POWER, now I'm going to show you the MAN, baby." Although, her makeup is carefully applied to frighten away predators.

Dr. Thorpe: I don't think she needs to be too worried about the guy on the right. First of all, he seems to have lost track of who he's chasing, and now he's veering off to the side. Second of all, he's wearing comfortable women's shoes.

Zack: Third of all, I think he's busy trying to asphyxiate himself with a Best Buy bag.

Dr. Thorpe: I'm not even sure what those tendrils coming out of his face are supposed to be. Let's just assume the guy is crazy and sort of look the other way and not worry too much about him.

Zack: If super powers are measured by collar height then Iron Fist is the most powerful superhero ever.

Dr. Thorpe: And if they're measured by the manly badassness of your belt, Power Man is definitely a contender.

Zack: He beat up a tramp steamer and took its anchor chain. "You come on my turf wearing a chain like that its gonna get took away. That's how we roll in this town SS Lady Elizabeth!"

Dr. Thorpe: And he beat up She-Ra for his tiara.

Zack: These heroes have the most impractical footwear of a super team ever. Iron Fist keeps breaking his heels, Dazzler keeps slamming into the wall of the rink, and Power Man is just confusing urban street culture with piracy of the high seas.

Dr. Thorpe: Yeah, they picked last when the super hero leader was handing out shoes. When you have waffled silver roller skates, you pretty much have to base the whole outfit around them, and there's really no way to make it tasteful.

Zack: I like that picture of Spiderman in the corner. It's like "c'mon we made Spiderman, so this probably isn't as bad as it looks." And it looks pretty dire.

Dr. Thorpe: Spidey looks sort of depressed and bemused. "How did it come to this?"

Zack: He's definitely phoning it in.

Dr. Thorpe: Everything about this picture leads me to believe that Dazzler commands the power of really bad roller skating. In the upper left corner you can see her teetering precariously, and in the main picture it looks like she's about to careen off a cliff. She probably knocks bad guys over with her clumsy skating.

Zack: She's not apologetic about it either. Look at her. She's going to careen right into your face and break it in half and she just don't care! Meanwhile Iron Fist is off in his own world thinking about things he can test the density of his fists on and Power Man can only really reveal his super abilities when the dimmer switch is low.

Dr. Thorpe: Power Man and Iron Fist run after her making sure she doesn't hurt herself.