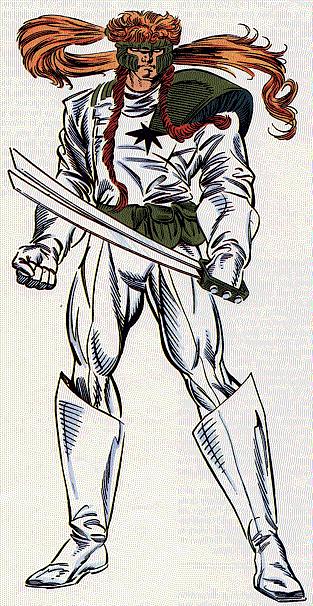 Dr. Thorpe: Imagine how much hair gel it takes to make his hair do that while he's standing still. Is that one big ponytail, or does he have one big hairloop on the left side of his head and some wicked ear-hair on the right?

Zack: Maybe his head is constantly spinning like a food processor and this image just caught it in mid-spin.

Dr. Thorpe: He's also got short, curly hair on top. Imagine what he'd look like if you took his sparring mask off. He'd have the most righteous mullet in history. An ass-length red mullet with a permed top? He'd be the envy of every Camaro owner in the world.

Zack: Yeah, that permed top is so dense with hair he had to add facial buttresses. It looks almost like someone launched a hair rocket that landed on top of his head and its odd trajectory carried it around the back first.

Dr. Thorpe: Also, furthering my white trash mullet metalhead hypothesis: he's got some sort of double sword. He totally got the idea from those double-necked guitars that heavy metal dudes play.

Zack: Those blades are sharp and strong. He can slice a tomato and a steel pipe AT THE SAME TIME.

Dr. Thorpe: Jesus, how does he get his muttonchops down past his face? That takes some incredible hairgrowing ability. He's got the mullet that comes down to his ass and the sideburns that come all the way down his chest, which means he's been growing them since he was like five years old. Not only is he committed to this ridiculous look, but he's been envisioning it since he was a little kid.

Zack: He had drawings on that huge Kindergarten rule paper of a hirsute Scotsman in a white coverall and white wading boots cuts bold and sharp.

Dr. Thorpe: And as he grew up, he began to realize that one of his shoulders was extremely vulnerable. "How can I work this into my look," he wondered.

Zack: This drawing is so bad I almost feel guilty making jokes about it. It's like when you see one of your friends fall down in front of you and you ask him if he's alright but you can't stop laughing. It's just adding insult to the injury we're already inflicting on the poor people looking at the picture.

Dr. Thorpe: He's got a lot of pouches, but something tells me he could have a lot more pouches. No, that's ridiculous, nobody could possibly have more pouches than him.

Zack: Yeah, there is no way. That guy has as many pouches as a human could have.

Dr. Thorpe: His hair must flail around a lot during fights. I wonder how often he accidentally cuts off his ponytail. Hopefully pretty often.

Dr. Thorpe: He's got such a squat little face. You can just tell he's going to age terribly. He'll look like Ernest Borgnine when he gets old.

Zack: When I ask myself what superpowers this guy could have the only possible conclusion is something related to rapidly growing his hair.

Dr. Thorpe: Also, he can cut things... more efficiently than a normal person. Or something.

Zack: He can cut things twice. At once. Like if you need a sandwich cut into thirds. BAM. Shatterstar is there. He will save you seconds you might have wasted with your primitive mono-bladed knife technology.

Dr. Thorpe: That double-sword was maybe an idea he had that seemed like a good idea, but then he made it and it turned out that it wasn't a good idea at all, but he was too proud to admit it.